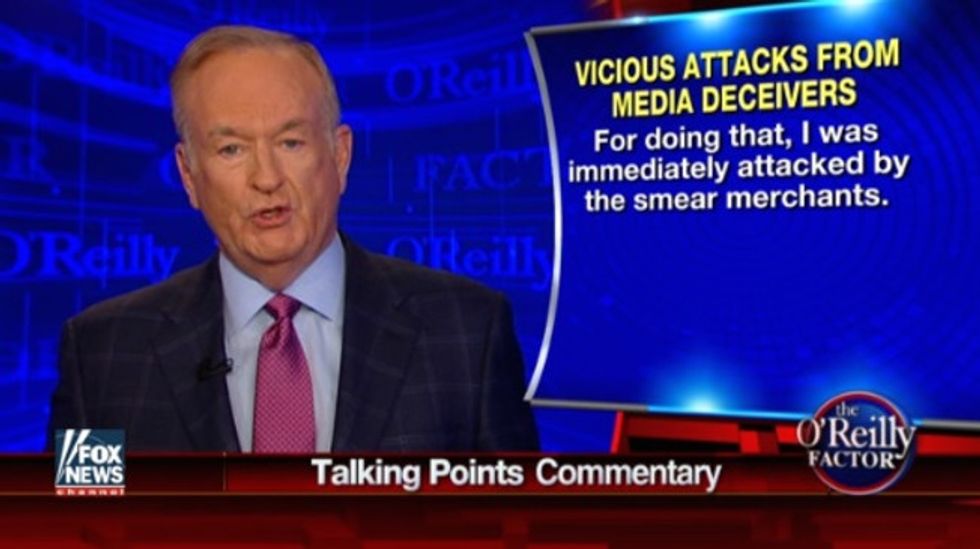 Wednesday, along with many other outlets, and also the perfect and beautiful Audra McDonald, yr Wonkette mocked the hell out of Bill O'Reilly for his dumb ass comments about Michelle Obama's speech. Specifically the ones about how it wasn't just slaves what built the White House, but also white guys who got paid, and how the slaves were "well-fed" and lodged.

AND THIS, YOU SHOULD KNOW, HURT HIM RIGHT IN HIS FEELINGS.

Everyone who criticized Billo is SO STUPID! O'Reilly now says he was just adding "context" to the speech, because he is a brilliant historian and of course he knows slavery was not a swell time always.

"For doing that, I was immediately attacked by smear merchants. It is a given that slavery is an abomination, but reporting the story behind Mrs. Obama’s very valid points does not diminish the horror of enslavement as these dishonest critics allege."

But was that "context" needed? Really? I am quite sure that no one heard Michelle Obama say "I wake up every morning in a house that was built by slaves," and inferred "And NOT any white people at all! Neener neener neener!" unless they are totally bonkers. Though, given the fact that these are the same people who hear "Black Lives Matter" and hear "White Lives Are Totally Expendable And We Are All Cool With Murdering Them, That Is Fine," it's not terribly surprising.

Alas, the "context" he was adding there was pretty much stuff he made up on his own. Because according to Abigail Adams, Mr. Historian, the slaves who built the white house were absolutely NOT "well fed." Here's what she wrote in her diary:

Two of our hardy N England men would do as much work in a day as the whole 12, but it is true Republicanism that drive the Slaves half fed, and destitute of cloathing, ... to labour, whilst the owner waches about Idle, tho his one Slave is all the property he can boast.

Now, no one is denying that slave masters ever fed their slaves (usually minimally), because if they didn't, they would die, and then that would be a poor use of your money. Nevertheless, sometimes slaveowners would beat or whip their "investments" to death, which sort of undermines the libertarian take on how market forces "moderated" slavery. O'Reilly's entire point in saying this, however, is to do the "SEE! It wasn't SO bad!/ Let's give these white guys some credit, OK!" thing. Because, you know, people like Bill O'Reilly do not want black people thinking about slavery and how terrible it was, because then they will get mad, and start wanting reparations or feeling angry towards white people, and that will be SCARY.

Anyway, this is the last straw for O'Reilly. He is tired of us picking on him, and picking on Fox News, for absolutely no reason whatsoever.

"I think the time has come now, where this whole network is going to have to band together, all of us, and we’re going to have to call out the people who are actively trying to destroy this network, by using lies and deception and propaganda. We're going to have to start to call them out by name, because that's how bad it's become."

Tragically, for yr Wonkette, we did not make it to O'Reilly's enemies list of people who cruelly mocked him for his awesomeness at history, which included Media Matters, Mother Jones, The NY Daily News and USA Today. But he is welcome to call us out by name at any time, because hey! Free advertising! Though we are pretty sure we were not using "lies and deception" so much as pointing out that Bill O'Reilly said a thing that was pretty crappy. It is weird how Bill O'Reilly can say that all of us want to take him and Fox News down, but just cannot get to that next step of why we might not be so fond of him or them.

Guest Geraldo Rivera agreed with O'Reilly that this was a thing people were only pretending to think was messed up at in order to "diminish" O'Reilly and diminish the network, but that he "gave them an opening" because "like the Holocaust, you can only speak about it in unequivocal damnation." Which, uh, yeah, seems about correct. Who sees the bright side of the Holocaust?

Geraldo then noted that you can only speak of things the way Bill O'Reilly speaks of them "in a historical setting." He also suggested that we, on the left, may not know what an AWESOME historian Bill O'Reilly is, and that he writes history books. You know, the "history books" that even the National Review has noted are full of lies? The books that historical sites refuse to sell because they are ridiculously inaccurate?

Fellow guest Eric Bolling noted that liberal outlets like yr Wonkette "missed the moment" to really appreciate Michelle Obama's speech, because we were so busy saying mean stuff about Bill O'Reilly. I don't know, I feel like we multi-tasked this like champs, frankly!

Following this, he and Geraldo commiserated on how tough it is out there for Fox News reporters, because the Black Lives Matter movement does not like them for some totally unknown reason. Geraldo noted that he got water dumped on his head and feared he would be hurt or have a brick thrown at him or something. Which is, you know, interesting... given that the only people we are aware of that have assaulted Geraldo Rivera like that were White Supremacists! Just the sort of people who might dig the way Bill O'Reilly was talking about slavery the other day!

O'Reilly agreed, noting that "it's getting to the point of danger," and telling Geraldo and Eric Bolling that people were totally not nice to his darling producer Jesse Watters, who does a segment in which he goes around and tries real hard to make people look stupid, often failing. Gee, I wonder why he is not popular!

"Jesse Watters goes on the floor of the Democratic convention, and some photographer comes up and starts swearing at him and cursing at him right in his face? This is provocation. These people are doing this. They want me dead, Bolling, literally dead."

In a brief moment of reason, Bolling suggested that we probably do not actually want him dead, but O'Reilly doubled down and insisted we did. Because criticizing someone for staying a stupid and gross thing is the exact same thing as wanting their head on a platter, right next to some delicious falafel! O'Reilly criticizes the librul media, does that mean he wishes us dead? Is he projecting? Or is he trying to find a way to write a book called "Killing O'Reilly?" Or is he worried that with Roger Ailes gone, Fox News will be consumed in a landslide on Bullshit Mountain?