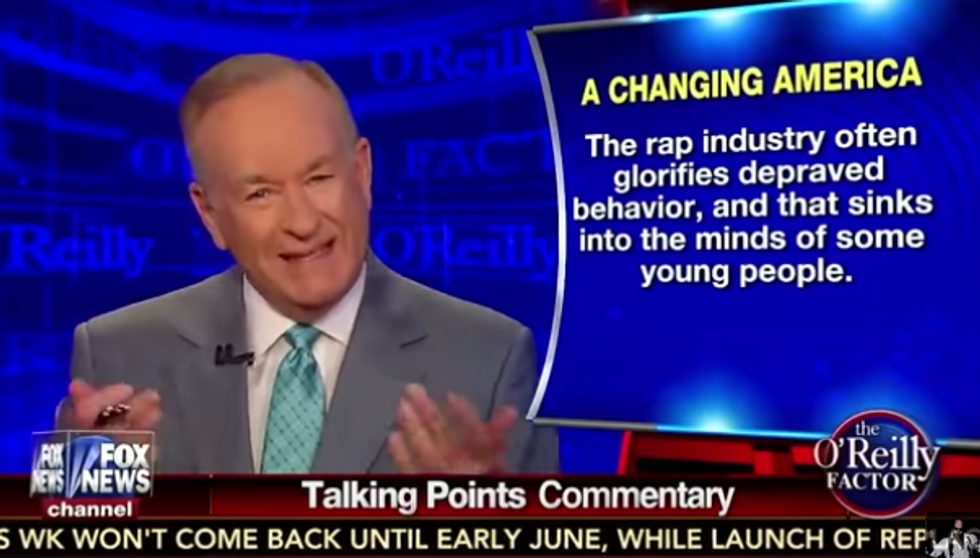 Bill O'Reilly is very upset. A new Pew poll has shown that the super-majority of Americans who identify as Christian is not quite as super as it used to be. Just eight years ago, 78.4 percent of the population was Christian, and now that number is only 70.6 percent, sadface. So who is to blame? Is it the Jooz and the Muslims? MAYBE! Their numbers have grown by a whopping 0.2 percent and 0.5 percent, respectively. They are attacking Americans with their matzoh balls and their Sharia law! But no, the real culprit is the "unaffiliated" lot, who are now a full 22.8 percent of the population. Bill O'Reilly knows what it causing this, and it is rap music:

"There is no question that people of faith are being marginalized by a secular media and pernicious entertainment. The rap industry for example often glorifies depraved behavior and that sinks into the minds of some young people."

FOR EXAMPLE! Because the blacks are out there hippity-hopping about drugs and loose women, and the Real Americans are just jumping off the bridge with them, and this is why they are breaking up with Jesus. O'Reilly also bemoans the fact that Americans, as a whole, are not all that inclined to be utterly cruel to illegal immigrants, and growing numbers believe we should "decriminalize the sale of poisons like heroin and cocaine." It is true that 53 percent of Americans would like to see marijuana legalized, because they all want to get potted up on weed probably, but we don't know what poll he's using that says everybody wants to legalize heroin. Maybe he read it while he was taking a break from personally refereeing the LA riots.

O'Reilly says that this is all going to spell the end of America, because none of the young whippersnappers care enough to make sacrifices for Jesus and America, which is exactly what happened to the Roman Empire:

"The prevailing wisdom, especially among young Americans, is whatever is good for me is good period, the overall good be damned ... Rome, the best example. The citizens there ultimately rejected sacrificing for their republicate [SIC!], for their republic, I should say, and the empire collapsed!"

It's like America has completely forgotten what happened to Rome! O'Reilly says that the Catholic Church is also to blame, because of the priest scandal. Maybe if they didn't fuck all those kids, people would still be going to confession, instead of bumping to the jive beats of the Snoopy Dogg Dogg.

This is all to say that people need to come back and learn about Jesus (maybe by reading O'Reilly's stupid Jesus book or watching his stupid Jesus movie?), or else America is over:

"Although the Founding Fathers wanted freedom OF religion, they did not want a secular nation! ... Adding it all up, there is no question the country is changing for the worse, and that's why the upcoming election is perhaps the most important presidential vote of our lifetime."

Yep, because Hillary Clinton is clearly not prepared to make war on the dirty hip-hop cusses and the devil's weed and make everybody accept Jesus Christ as their personal lord and BFF.

Save us, Mike Huckabee!