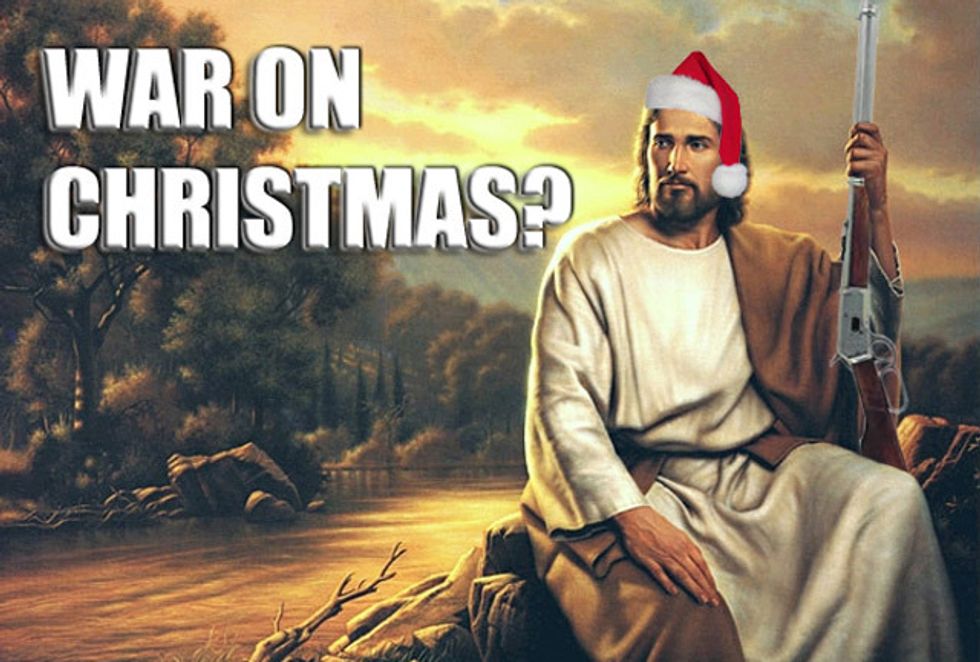 It's that time of year again. The first snows are falling, the college kids are planning their trips home for Thanksgiving break, and the calls for impeaching the president are stretching into their sixth year. And so, it it time for the festive celebration of the War On Christmas, that annual ritual where Bill O'Reilly and all of Fox News protect the rights of Christians to scream "Merry Christmas -- NOT HAPPY HOLIDAYS!" in the name of the Prince of Peace.

Wednesday, Mr. O'Reilly took on the shocking murder of religious holidays on the calendar of a school district in Montgomery County, Maryland. Next year, kids will still get Christmas off from school, but the official calendar won't name the holiday that they're getting off. The school board voted to axe religious holiday names from the calendar after a local Muslim group asked that the district also recognize Eid al-Fittr and Eid al-Adha.

So they wanted to have equal status with Christmas, Hannukah, Passover, right? But there aren't nearly as many Muslim kids in schools in Montgomery County, Maryland, as there are Jewish or Christian kids.

Horrifying! (Also, we are going to bet that the schools don't actually take Passover off. We're just guessing -- it's not actually mentioned in the WaPo story.)

Billo thinks that the school district overreacted -- and it must be a Festivus Miracle, because Yr Wonkette agrees on that part only -- but added that the Muslims are the real troublemakers for wanting their children to be allowed to take two whole major Muslim holidays off, because where would it stop? Wiccans wanting holidays off?

He urged a Solomonic compromise: "I'll put your little holiday on there, OK? But you're not getting it off." But he was very clear that he was not besmirching the Muslim religion, just the people asking for the holiday, who are naught but a "pressure group."

All in all, it's a sad day for America's Judeo-Christians:

You know, Christmas, Easter, and Passover -- these have a Judeo-Christian tradition in our country. So they just wiped out all our traditions because these people... but I will say, I woulda been respectful and put it on the calendar, but you're not gettin' it off.

It's so nice to see Bill O'Reilly being the calm voice of reason, even in the face of a provocation like the complete destruction of all our traditions.