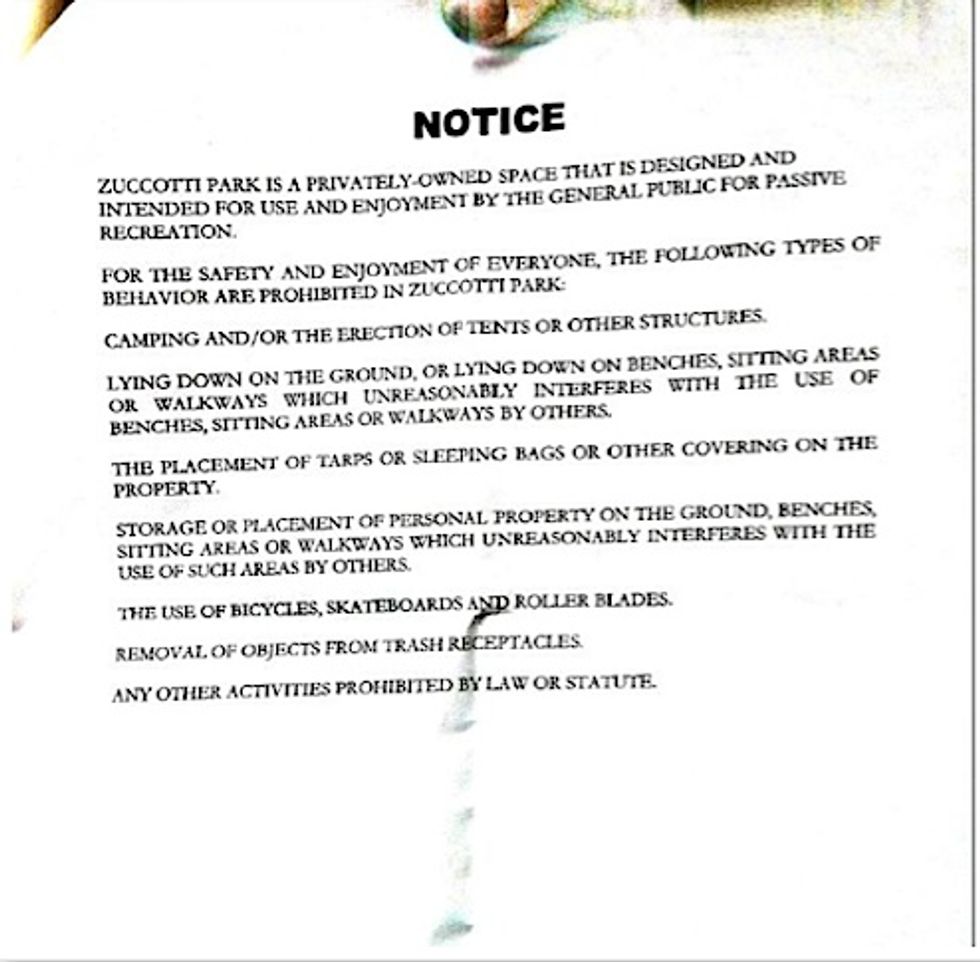 Wall Street billionaire Michael Bloomberg has been nervously "playing nice" with the Occupy Wall Street movement for a month now, because he honestly fears an Egypt-style national uprising in America that will end with most of the Wall Street plutocrats' heads on pikes. He is correct to fear this, of course -- you can only fuck over 99% of the population for so long before enough of them figure out they've got the advantage. Also, Bloomberg's wife-lady is on the board of the company that "owns" the public greenspace known as Zuccotti Park/Liberty Square. So it's going to stain Bloomberg when the jackbooted thugs and bulldozers move in on the peaceful protesters. Still, Bloomberg is hearing from his fellow kleptocrats all day long, and they are scared, and he's scared, and they're telling him, "Listen you had better DO something about this bullshit, it is totally getting out of hand," and the Gulfstreams are fueled up and waiting on the tarmac, servants and nannies and mistresses and little overly groomed dogs and even wives & children at the ready.

Tomorrow night, according to Mayor Bloomberg, his hired muscle will move against the Ocupados because ... uh, what's the excuse? Cleaning! Things just need to be cleaned up, a bit. Like in San Francisco, where the protesters were held back by the jackboots while sanitation laborers took the stuff to be dumped at the landfill -- haha, and then the sanitation laborers then returned the stuff to the protesters, in solidarity.

Tomorrow night is supposed to be the "Family Campout/Sleepover" at Occupy Wall Street. Lots of people who want to take part in the protests against American Kleptocracy feel they cannot, because they've got kids and daycare and school plays and all that. Well, this is a nice thing on a Friday evening, bring the kids in PJs and have popcorn and watch movies projected on the buildings and make it a family night. And now Bloomberg wants to move in on this particular night, because he and his .001% cronies do not want happy images of cute kids in jammies singing Woody Guthrie songs with Tom Morello or whatever. So the families have been terrorized out of attending this peaceful protest. Terrorized. That's what it is. Mayor Bloomberg's phone number is 311 (in New York). [Families for Occupy Wall Street/Petition]