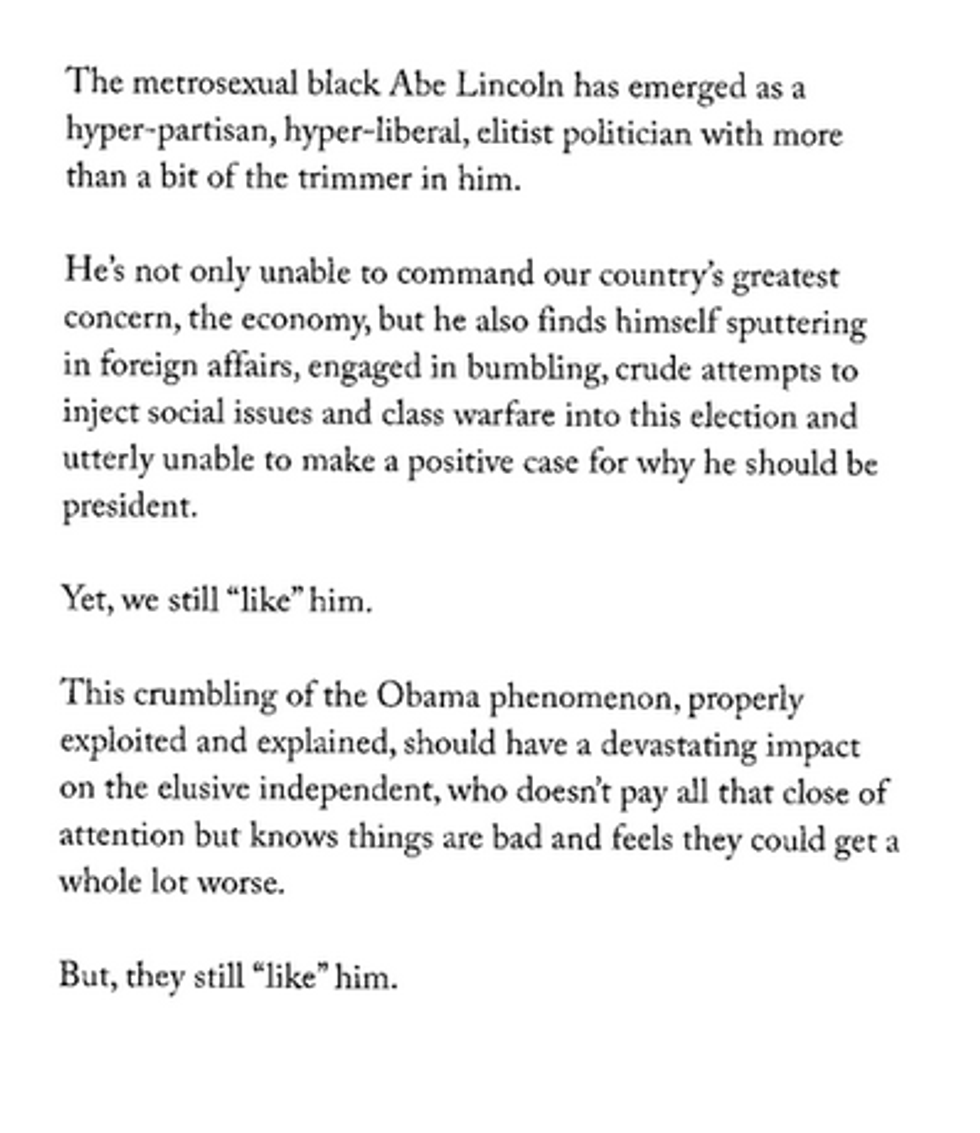 Uh oh! It looks like some rightwing Chicago Cubs owner (?) has a secret plan to spend millions finally showing America the real Barack Hussein NOBAMA via his shadowy association with a man no one has ever heard of before and whose name you will not even recognize because of how this has never been covered! Stupid LAMESTREAM MEDIA! Time to get fitted for your inauguration crown, Governor Romney, because Bamz is about to get blown out of the water by this new, never-heard-before, super-shocking revelation!

The plan, which is awaiting approval, calls for running commercials linking Mr. Obama to incendiary comments by his former spiritual adviser, the Rev. Jeremiah A. Wright Jr., whose race-related sermons made him a highly charged figure in the 2008 campaign.

Who? Your Wonkette has never heard of that person, because of how stupid old John McCain would not let Steve Schmidt or the other heroes of his 2008 campaign focus on race-baiting, because he is a jerk. It seems -- don't quote us, we are just jumping into this new information that nobody knew until now -- that Rev. Jeremiah A. Wright Jr. is a pastor, and he is black and controversial!

“The world is about to see Jeremiah Wright and understand his influence on Barack Obama for the first time in a big, attention-arresting way,” says the proposal[.]

The $10 million plan, one of several being studied by Mr. Ricketts, includes preparations for how to respond to the charges of race-baiting it envisions if it highlights Mr. Obama’s former ties to Mr. Wright, who espouses what is known as “black liberation theology.”

This is still John McCain's fault, how nobody ever heard of this person who was the impetus for a trivial, non-important speech Barack Obama gave about race that nobody listened to.

The proposal suggests that Mr. Ricketts believes the 2008 campaign of Senator John McCain erred in not using images of Mr. Wright against Mr. Obama, who has said that the pastor helped him find Jesus but that he was never present for Mr. Wright’s politically charged sermons. Mr. Obama left the church during the campaign.

Apparently referring to a Wright ad that was produced for the McCain campaign by Mr. Davis’s firm but never used, the proposal opens with a quote from Mr. Ricketts: “If the nation had seen that ad, they’d never have elected Barack Obama.” [...]

The document, which was written by former advisers to Mr. McCain, is critical of his decision in 2008 not to aggressively pursue Mr. Obama’s relationship with Mr. Wright. In the opening paragraphs of the proposal, the Republican strategists refer to Mr. McCain as “a crusty old politician who often seemed confused, burdened with a campaign just as confused.”

“Our plan is to do exactly what John McCain would not let us do: Show the world how Barack Obama’s opinions of America and the world were formed,” the proposal says. “And why the influence of that misguided mentor and our president’s formative years among left-wing intellectuals has brought our country to its knees.”

Here is some fun verbiage from the plan's introduction that does not at all sound certifiably schizo, but these days who can even know?

Looks like we are in for MOAR VETTENING, fellows -- VETTENING that will prove once and for all that Barack Obama cannot stop hugging black guys! Fasten your seatbelts, for this sure to be bumpy ride! [NYT]