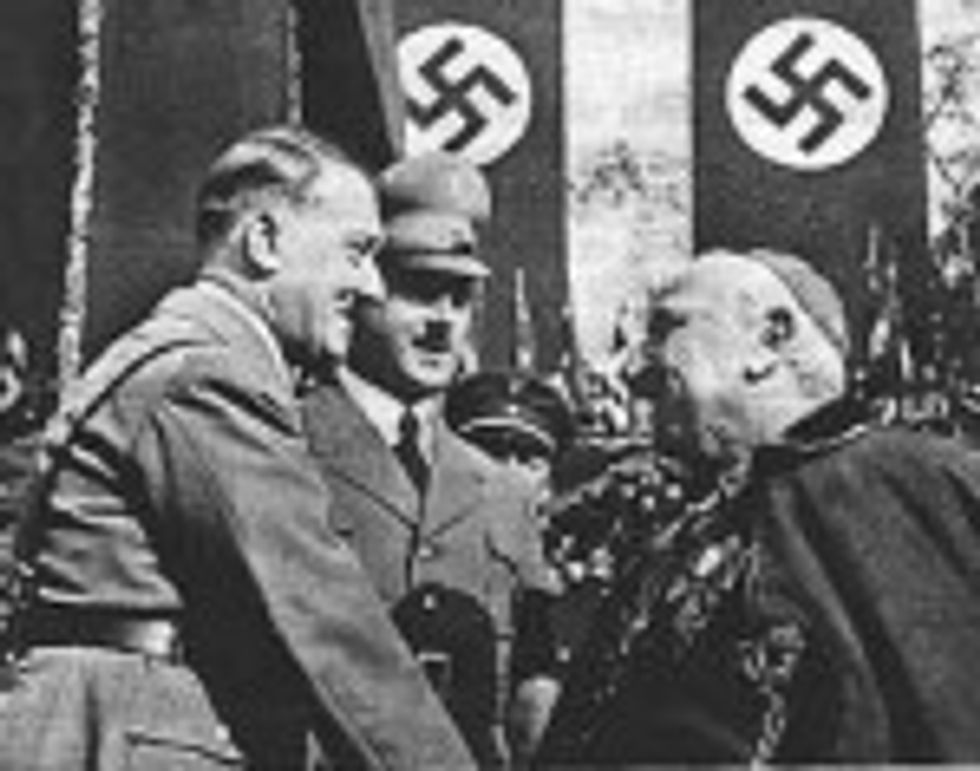 Peoria, IL - Bishop Daniel Jenky was conducting his Sunday message to a small group of Catholic followers in hismodest countryside church, nestled in Peoria, Illinois. Bishop Jenky really knows how to deliver a powerful message. And just as Jesus would have done, he compared President Barack Obama to Adolf Hitler and Joseph Stalin.

CatholicshavehadalittleHitlerexposure over the years, so it was no surprise that the Bishop was able to see so many similarities between the three. Bishop Jenky isn’t your typical hatemonger. He is an educated hatemonger and he has all sorts of letters following his name to prove it. He refers to himself as “Most Reverend Daniel R. Jenky, C.S.C., D.D.”

“Hitler and Stalin, at their better moments, would just barely tolerate some churches remaining open, but would not tolerate any competition with the state in education, social services, and health care. In clear violation of our First Amendment rights, President Obama — with his radical, pro-abortion and extreme secularist agenda, now seems intent on following a similar path.”

That is why Barack Obama has shut down all the Catholic schools and hospitals, in his War on Catholics, which he learned at the knees of liberal Catholics who were also at war with Catholics, by being liberal.

How can a person who claims to walk the path of Jesus Christ be so full of anger towards President Obama? Was it that Obama was jamming condoms and slut pills down the throats of Catholic churches? Any decent Catholic leader knows using a condom is like having sex with a boy while wearing a rain coat. And birth control allowance just drives the Catholic ladies wildly hot, making them want to vote and do stuff on their own! Or does Jesus simply hate Barack Obama? It is a combination of everything, but mostly the condoms and hate.

Cardinal Timothy Dolan, the archbishop of New York, is a 'super Catholic' in the US. He had harsh words for Obama’s mandate, charging that the administration is attempting to divide the Catholic Church. But Dolan isn’t a well educated bat-shit Bishop, so he doesn’t see the Hitler/Stalin comparison, but he knows what latex feels like on his penis and that is a definite ‘no way.’

Obama’s lair of hippie satanic cults like the Anti Defamation League have come out and demanded the bishop issue an apology, but no apology has been made. We are in a new era, America, but it seems as though history may be repeating itself. We have a Jew hunter who not only endorses birth control, but is hellbent on taking over the world and he goes by the name Barack Hussein Obama. You have heard it from Bishop Jenky first. Heed his warning and take cover. It is about to rain fire and latex. [AIM.org]