Blackwater's Erik Prince Wrote A Book About Erik Prince, And How He Is Awesome 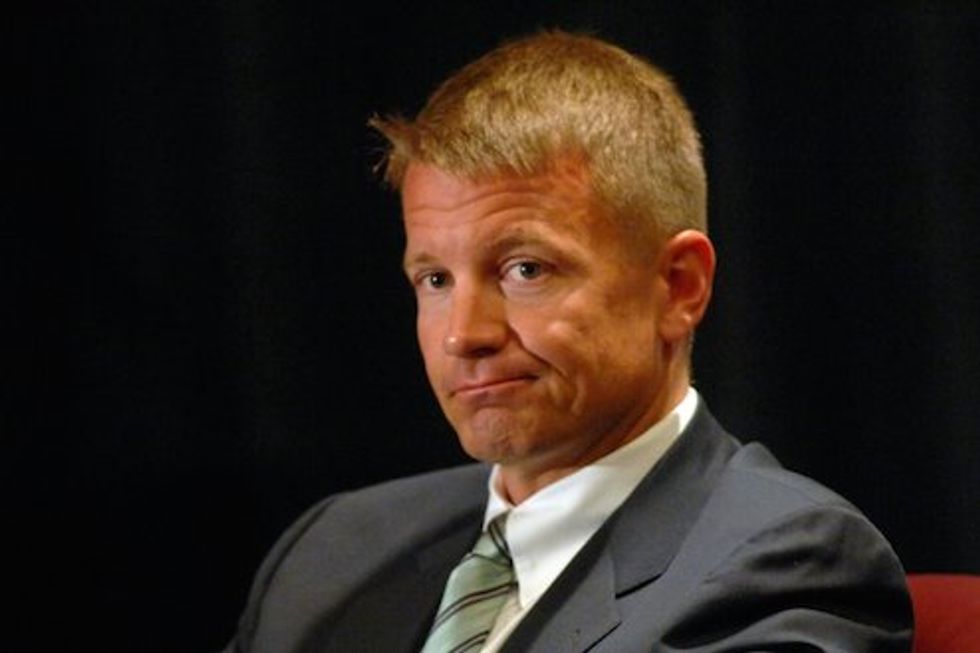 With Blackwater back in the news, Yr Wonkette is pleased to bring you this review of a book written by Blackwater founder Erik Prince. This post is made possible by a generous grant from the Edward Bernays Foundation for Accuracy in Memoirs and War Reportage.

Prince's tale begins with a ripping firefight on the streets of Baghdad, but even in the first pages, the Blackwater founder displays a penchant for playing fast and loose with the truth. Drake Bennett at Bloomberg Businessweek tracked down Frank Gallagher, who was actually in the firefight, and it appears that Prince's version of events was punched up by Michael Bay's script team:

In Prince’s version, however, there’s one addition: The [Blackwater helicopters] unload their guns on the enemy. Gallagher insists that didn’t happen, and the addition bugs him. “The incident was exciting enough; there’s no reason to embellish it,” he says.

After spinning scintillating lies about a Baghdad firefight, Prince feels the need to properly contextualize the role of military contractors, so he spends a chapter or so cherry picking facts among the corpses of history. Yea, children, gather 'round and hear the tale of Columbus, who was a private military contractor for Isabella and Ferdinand, and you have to admit that worked out pretty great for all concerned. Children, did you know that there were private military contractors helping George Washington? There were! (And even some who weren't helping him, too!) Private military contractors are a thing that has existed before, and that's why they should probably keep existing, because history, says Erik Prince.

But isn't "private military contractor" just a euphemism for "mercenary"? Nope, says Erik Prince, Blackwater's men weren't mercenaries at all, buh-cuz if your lawyers squint and tilt their heads a little bit, it says so right here in this obscure UN proclamation on the subject. Done, see how easy that was? With that accomplished, Erik Prince will now return to deriding the UN as an overly cumbersome bureaucracy full of pencil pushers who — unlike Navy SEAL Erik Prince — aren't focused on getting the job done.

About those git-r-done Blackwater employees: Prince insists that the men he hired for Blackwater were all highly trained professionals, just plain better than your average soldier. Prince also insists that when his employee, Andrew J. Moonen, shot an Iraqi Vice Presidential security guard, hey, bad hires happen in every line of business, and if you want an omelet, you're going to have to crack some eggs.

Prince also argues repeatedly, in the book and in interviews with a wide range of media, that his company offered a far better value to the taxpayers than anything provided by dum-dum fedrul guvmint. At some point during his interview with Prince, National Review's Alec Torres stopped writing “MRS. ALEC PRINCE <3<3<3” long enough to transcribe this quote:

“The Pentagon budgets $2.1 million a year for every active-duty soldier. So a private contractor can say, ‘That’s bullshit. I can provide a guy with the same qualifications, a 35-year-old man with ten years’ experience, and I can put him in the field for $400,000 a year. That’s one-fifth of what the government spends.’”

Provided the “guy” in question has $21 million worth of training from the Pentagon, that is indeed something you can say, Erik Prince! But even the best-trained operator can still make the ultimate sacrifice in a war zone, and you'd expect Prince — a former Navy SEAL, as he repeatedly reminds us — to spare no expense in providing compensation to the families of the fallen.

“...if Callahan can be said to have done anything well in this case, it was to lean on the fact that the trial lawyers' trade association remains one of the largest donors to the Democratic Party, and then insidiously tie his civil court case into the nation's larger political debates.”

Erik Prince never was a fan of lawyers, with their flashy suits and their way of twisting language to make it fit their larger goals. Erik Prince prefers action, and he doesn't believe in bloviatin' and equivocatin'. Hey, let's listen to straight-shootin' Erik Prince talk about how he impregnated another woman while his wife was dying of cancer!

“I felt as if it was all I could do to keep things from spinning completely out of control, and I found comfort in the arms of a woman named Joanna Houck, who had worked as our nanny in Michigan. In mid-2002, when we all moved back to Virginia, she was hired to perform administrative functions at [Blackwater's] Moyock facilities. She became pregnant before [Prince's first wife] Joan died.”

You have to understand, Erik Prince says, the stresses of running a fast-growing private military contractor “as well as the effects of cancer and surgery and chemotherapy [...] eliminated most of the romance or intimacy” between Erik and Joan.

Jeez, Joan, show a little empathy while you're dying of cancer, will ya?

After Joan died, Erik learned that she had known about the other woman the whole time. But Joan had forgiven him, Erik says — she wrote it in a letter she left him, see?

Erik Prince is a devoutly religious converted Roman Catholic. His father “helped Gary Bauer and James Dobson launch the Family Research Council.” Like Whitman singing of himself, Erik believes it is good to fall, that battles are lost in the same spirit in which they are won. Alas, Erik's relationship with former nanny Joanna didn't last: on page 329 of his 331-page book, Prince writes, “(My divorce from Joanna was perhaps inevitable),” parentheses in original.

So Erik Prince isn't perfect, okay? Big deal, says Erik Prince, because he is also neither a war-monger nor a war-profiteer, so long as you're not defining the latter term literally or absolutely, and even if you are, other private companies charge the taxpayers way more, alright?

As a result of his patriotic amazingness and his commitment to market-driven profit margins, nasty Democrats forced Erik Prince to testify before Congress. It was scary, but the night before it happened, he got phone calls from both “Richard Nixon's 'political point man'” Chuck Colson and from brave American hero Oliver North. These phone calls helped remind Prince that he is America, and that he is good not because America is good, but because good is America.

In his testimony to Congress, one of those nasty Democrats, Rep. Diane Watson (D-Kommiefornia) asks Prince a question he deems important enough to include in his book (Watson's question begins at 3:27):

Starting at 4:28, Prince gives a politic response, but in the book, he recounts a different story:

My mind raced in a dozen directions at once—starting with an unequivocal yes: Blackwater would likely continue to fill those capability gaps for the military and the State Department. [...] Politicians claim they want to get rid of contractors? I'd have been happy to see them send to Iraq more than the 135,000 troops Donald Rumsfeld had planned for. [...] Do lawmakers really expect the secretary of defense to declare on TV that his plan was wrong, and that generals below him were right to fight for more soldiers?

See, asks Erik Prince? The culture of bureaucracy and bloat in Washington is simply too much to bear, but what are you going to do, lead by example and change it?

And that's ultimately Erik Prince's point: shut up, stop asking stupid questions, and also pay me. When Prince is recounting Blackwater's successes, they are attributable to the way he and his men put duty and service above all else. When Prince is defending Blackwater's failures, hey, no fair criticizing us, because we're not nearly as bad as the stupid government.

Erik Prince is no longer living in America. He's pretty sure he doesn't want to live in an America that's just losing its darn mind. Instead, he's living in Dubai, where he's founded a company called Reflex Responses (R2). R2 is fielding a private army of highly trained foreigners for the Emirates. They are definitely not mercenaries, as R2's attorneys at Patton Boggs will be happy to tell you.

You wanna investigate Erik Prince? Roll the dice and take your chances. If you want the truth, you've gotta ask Erik Prince nicely.

Civilian Warriors: The Inside Story of Blackwater and the Unsung Heroes of the War on Terror, by Erik Prince. Portfolio, 2013. $19.69