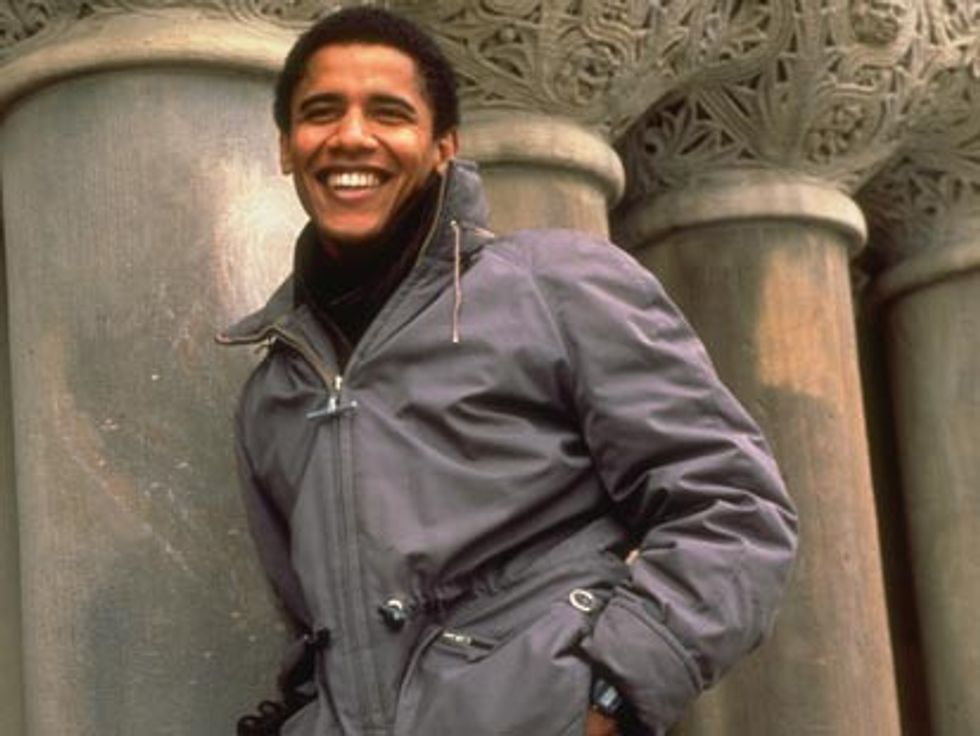 Some #WARBLOGGERS are pooling their Koch-muneez and offering the Mitt Romney-wagering sum of TEN THOUSAND DOLLARS to anyone who can shadily fork over total Affirmative-Action-Baby President Bammerz' college transcripts. This, presumably, is because he is soooo stupid. Teleprompterz! 57 states! Derp derp derp. How stupid is he? Well, let's reach into the wayback machine of about two hours ago, and look at how he wrote his LOVE LETTERS:

Facing what he perceives as a choice between ecstatic chaos and lifeless mechanistic order, he accedes to maintaining a separation of asexual purity and brutal sexual reality. And he wears a stoical face before this. Read his essay on Tradition and the Individual Talent, as well as Four Quartets, when he’s less concerned with depicting moribund Europe, to catch a sense of what I speak. Remember how I said there’s a certain kind of conservatism which I respect more than bourgeois liberalism—Eliot is of this type. Of course, the dichotomy he maintains is reactionary, but it’s due to a deep fatalism, not ignorance. (Counter him with Yeats or Pound, who, arising from the same milieu, opted to support Hitler and Mussolini.)

"Counter him with Yeats or Pound, who, arising from the same milieu, opted to support Hitler and Mussolini." Pffft. What a fucking dummy.

So obviously the bloggers would like to point and laugh at NOobaMa's "Gentlemen's C's," unless it's more a case of oh sure his grades are fine, we guess, but he took courses in things like "MARXY MARXY REVOLUTION MARX HOORAY 101," or "Dead Honky: How To Talk Jive," and maybe "Gender-Queer-Porno Studies: Why Don't We Do It (In the Butt and) In the Road." Which all sound like awesome classes, frankly, and we should all go back to college all over again!

But is there anything bad about the bloggers' criminal offer to receive stolen property? Only this: Obama himself is not eligible for the reward, and we think that's stank, as OF COURSE he should be all "nah mang, here's the transcripts, seal raised and everything, and now I am giving your $10,000 to The Center for Atheist Transgendered Scout Masters And Forcible Bortion." Because that would be baller. [DailyCaller]