Bob Jones University Told Rape Victims To Repent, Since Stoning Them Not An Option 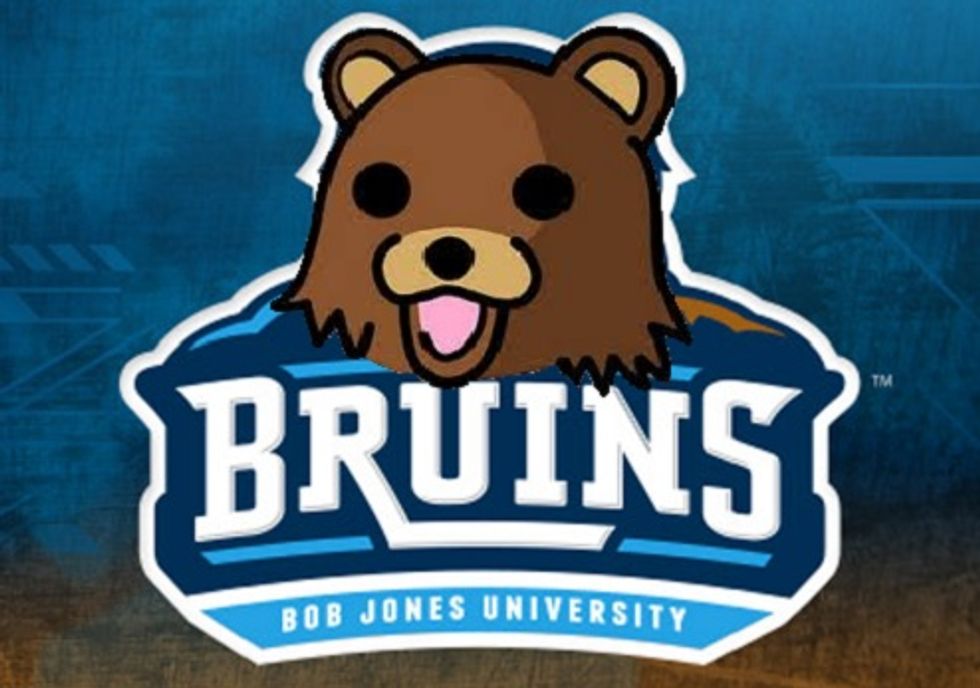 Earlier this year, Bob Jones University -- that august incubator of fundagelical pod people and creation scientists -- decided to shut down an independent investigation of how the institution dealt with cases of sexual abuse, whether assaults on campus, or the school's treatment of students who tried to get help for abuse that occurred to them before they came to BJU. (Yes, make your inappropriate abbreviation jokes now, you sickos.) Welp, it turns out that after everybody and their demon-possessed dog accused the university of a cover-up, Bob Jones U re-hired the agency it had fired, the investigation was allowed to continue, and now the final report has been issued.

As we noted back in February, the group that did the investigation has one of the most tortured acronyms we've ever seen: GRACE (Godly Response to Abuse in the Christian Environment), which sounds like something from a bad Christian adventure comic book (Nick Stigmata, Agent of GRACE). But they're apparently a big name in the Christian nonprofit world, which sort of makes you wonder just why there's a thriving business environment for investigating sexual abuse in Christian institutions. They must have a hell of a business plan. The New York Times has a big story on GRACE's investigation, and it's not pretty:

Bob Jones, an evangelical Christian institution in Greenville, S.C., displayed a “blaming and disparaging” attitude toward abuse victims, according to 56 percent of the 381 current and former students and employees who replied to a confidential survey and said they had knowledge of how the university handled abuse cases. About half the 166 people surveyed who identified themselves as abuse victims said the university actively discouraged them from going to the police.

And oh, the stories are just as awful as you might expect, just bursting with Fundamental Christian Love and Compassion ... for abusers:

“I was abused from the ages of 6 to 14 by my grandfather,” one respondent said. “When I went for counseling I was told: ‘Did you repent for your part of the abuse? Did your body respond favorably?’” The person reported being told by a university official that going to the police “tore your family apart, and that’s your fault,” and “you love yourself more than you love God.”

Another person said that at Bob Jones, “abuse victims are considered ‘second-rate Christians.’ ” And another said that university staff consistently told victims “that they bore the sin of bitterness and that they should not report abusers.”

Still, there's a lucky thing for those who came forward: Not a single one was stoned to death for being a slut or a stubborn and rebellious child, in compliance with Deuteronomy 21:18-21. Then again, not following that commandment may actually mean that Bob Jones is soft on doctrine, so parents should send their darlings to a real Christian school like Pensacola Christian College.

The Times notes that the GRACE report differs from a lot of the current discussions in the news in one key area:

The criticism of Bob Jones differs from that prompted by the sexual-assault scandals that have erupted at colleges across the country, in that it is not primarily about assaults on or near campus, committed by students or staff members. Rather, the university has been criticized for penalizing victims who reported incidents or sought treatment, and were told not to go to the police, even when the university had a legal obligation to do so.

Roughly half of the victims interviewed by GRACE said that they had been abused before attending BJU; only about 37% discussed assaults by school employees or other students:

But in many cases, victims said they were assaulted as children by people within their churches, and were told by university officials that speaking out would hurt the Christian cause.

We're pretty sure Jesus said something about how sweeping the truth under the rug is just fine as long as you have a really good reason for it.

And here's a heck of a surprise: While university officials are making appropriately regretful noises -- President Steve Pettit said “We failed to uphold and honor our own core values ... We are deeply saddened to hear that we added to their pain and suffering” -- they're also not saying anything definite about what they're going to do about BJU's culture of victim blaming. Instead, they say they need time to study the final report and formulate a response, and who knows, maybe make arrangements to move somewhere without an extradition treaty.

The report singled out Bob Jones III, who was the university's president from 1971 to 2005 and is now the chancellor, and James Berg, who ran the school's counseling programs:

“Due to the central role Dr. Jones III played in the many issues outlined within this report, it is recommended that the university impose personnel action” against him, the report says. It notes that he “has repeatedly demonstrated a significant lack of understanding regarding the many painful dynamics associated with sexual abuse.”

Dr. Berg, the report says, should “no longer be authorized to teach on any issue related to sexual abuse or victimization,” or even to provide counseling or speak out on the issue, on or off campus.

GRACE has also requested a meeting with university administrators, so they can discuss particular "employees identified during the investigation as individuals who have caused hurt to sexual abuse survivors through their teachings, conduct, or overall disposition," and come up with a plan of action, preferably one that does not merely involve them having a good pray over what they did to students who were looking for help but got a great big dose of shame instead.

Happily, now that the investigation is finished, we're confident that Bob Jones University will fix all its problems and will now become a very supportive place for victims of sexual abuse. And Yr Dok Zoom knows what his weekend reading is going to be.