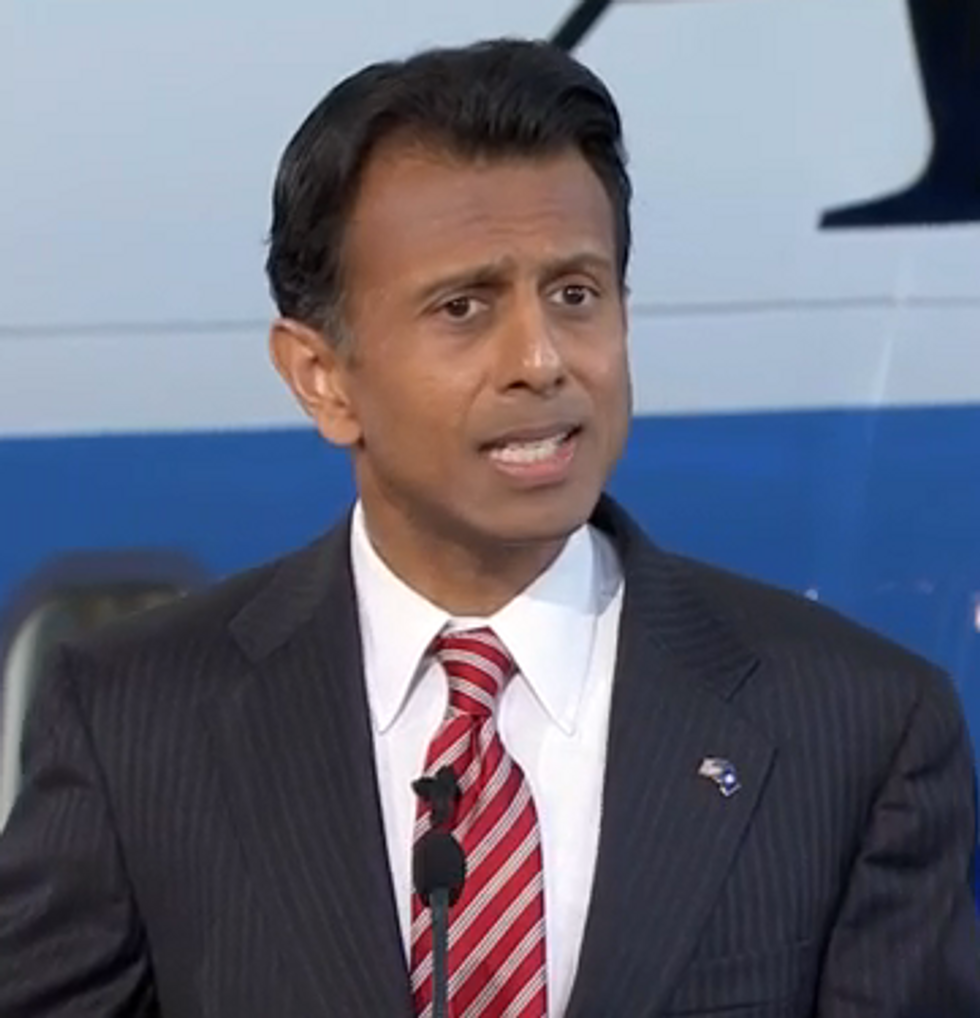 Did you know Louisiana Gov. Bobby "No Hyphens" Jindal is still running for president? Yeah, neither did we, but he is. (Though not for long, we are guessing, on account of how LOL, nobody likes him. Literally, nobody.)

Anyway, now our nation is once again embroiled in a very serious debate about "How Much Should We Hate Muslims, All Or Even More Than That?" -- thanks to a 14-year-old science nerd in Texas whose farts are smarter than your average American, and also thanks to Donald Trump and his idiot jackass supporters. So Jindal has some thoughts he'd really like people to pay attention to, and he'd like a cookie and a glass of milk for being so clever about it:

Following questions posed to various Republican Presidential candidates over the weekend, as to whether they would vote for a Muslim for President, Governor Bobby Jindal challenged the press by using their own game against them.

“This is a dumb game that the press is playing. It is an absurd hypothetical question. But let’s indulge the media for a moment and play their gotcha game."

Ya see how clever he is? He thinks debating whether it would be OK for a Muslim to be president is a real stupid question, and he's above it, of course. But he's not about to dismiss a hypothetical question and miss out on the opportunity to pander to the Christian conservative base. What is he, Scott Walker? He's not that dumb. And since he's polling at less than 1 percent, Jindal needs to seize every opportunity to remind people that he's still technically a candidate:

“If you can find me a Muslim candidate who is a Republican, who will fight hard to protect religious liberty, who will respect the Judeo-Christian heritage of America, who will be committed to destroying ISIS and radical Islam, who will condemn cultures that treat women as second class citizens and who will place their hand on the Bible and swear to uphold the Constitution, then yes, I will be happy to consider voting for him or her.

“If you can’t, I’ll settle for voting for a Christian Governor from Louisiana.”

Wow, check out the religious transcendence on Jindal! He's so open-minded and so A Serious Candidate Unlike All The Joke Candidates Who Are Kicking His Ass, he'd even support a Muslim! As long as that Muslim adhered to (TRIGGER WARNING FOR HYPHEN!) "Judeo-Christian" beliefs, which means Christian plus that one line about NO BUTTSEX from Leviticus. Like how Jesus wrote the U.S. Constitution, just for non-hyphenated (irony!) Christian white folk, like Jindal. And also how Muslims are inherently bad evil wrong THE WORST because of how they are mean to women and go around defunding their basic healthcare, in violation of federal law. Oh wait, no, that was Bobby Jindal.

Still, find Jindal a Muslim who's willing to take the oath of office by swearing on Jindal's Book o' Jesus, and who thinks suspecting Muslim teenagers of building bombs because of how they are Muslim is legit, but won't someone please think of the persecuted Christian bakers and florists? Find someone who's willing to stand up for Christian supremacy in America, like how Jindal is, with his bold proposal to decriminalize Jesus, and he just might, might, consider supporting such a him-or-her candidate. But really -- ha ha, #jokes -- he'd prefer a Christian governor from Louisiana. And if can't be Jindal? (And it can't; he's this close to being the next Rick Perry, if Chris Christie doesn't beat him to it.) Well, we guess any rightwing extremist Christian will do.