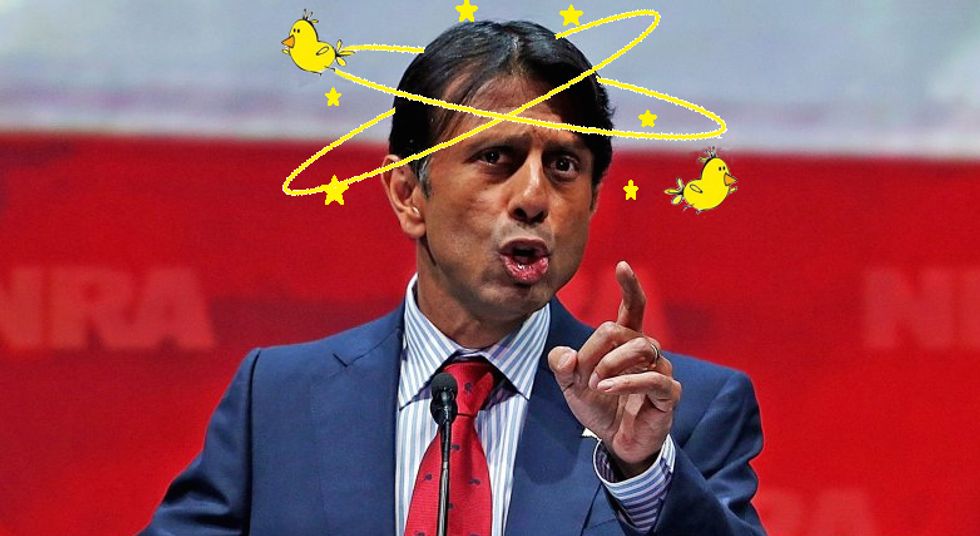 Oh looky here, isn't this just so adorbs? Bobby Jindal, the outlaw scumbag Confederate governor of Louisiana, made like a dirty blogger in his mom's basement, and blogged his thoughts about the young man who murdered nine people in Roseburg, Oregon, before turning the gun on himself.

Are they nice thoughts? Fuck no, we just told you these are direct from the so-called brain of Bobby Jindal, who is a terrible skidmark of a human being, for any number of reasons, take your pick, but this here's an extra good one.

Another week, another mass shooting, another press conference by the President lecturing us on the need for gun control, and now Hillary and Obama are in a race to see which of them can be the most extreme in trying to destroy the Second Amendment to the Constitution of the United States. Rinse and repeat.

God fucking forbid the current president (or the future president, suck it, BOBBY) calls for even the kinds of gun restrictions that the overwhelming majority of Americans, including gun owners, supports.

But there is something missing from this discussion, and it’s a glaring omission that everyone knows deep down, but politicians are afraid to talk about.

And guess, just guess, what Jindal thinks is missing from this conversation. No, it's not the abundance of guns in America, or the ease with which they can be purchased, or the complete lack of accountability for gun owners who are fatally irresponsible, or the refusal by wingnut sheriffs to enforce existing laws. That's politicized liberal wussy talk.

No, what's missing is a frank conversation about the "deep and serious cultural decay in our society," like the violent MTV video games and the songs that say mean things about the ladies, and the lack of God in our public-square faces, and abortion, of course. And you know what else no one but Bobby Jindal has the nutsack to talk about?

How the killer's dad owes us all an apology for daring to talk about guns instead of shooting them:

Now, let’s get really politically incorrect here and talk specifically about this horror in Oregon. This killer’s father is now lecturing us on the need for gun control and he says he has no idea how or where his son got the guns.

Of course he doesn’t know. You know why he doesn’t know? Because he is not, and has never been in his son’s life. He’s a complete failure as a father, he should be embarrassed to even show his face in public. He’s the problem here.

He brags that he has never held a gun in his life and that he had no idea that his son had any guns. Why didn’t he know? Because he failed to raise his son. He should be ashamed of himself, and he owes us all an apology.

Yeah, grieving dad whose son just killed nearly a dozen people, including himself! How dare you politicize the issue of the heinous crime your son committed when it's obviously your fault! Instead of bragging about how you've never held a gun, you should be on your knees apologizing to Bobby Jindal for never teaching your boy how to properly wave around his boomstick. And no, you can't wait until your dead son is in the ground. Do it NOW, you shameful bastard, YOU OWE US THAT.

When he was asked what his relationship was with his son, he said he hadn’t seen him in a while because he lived with his mother. Case Closed.

Case closed, says Jindal, so there's no reason to consider whether the shooter's mother should also be publicly shamed and forced to apologize. Since the shooter's parents divorced when he was 16, it's all the fault of his unquestionably absent father. Besides, his mother had a good and proper enthusiasm for guns and exposed her son to the right kind of culture: by reading Donald Trump's The Art of The Deal to her son, from the time he was a baby. Yeah, no one could ever arch an eyebrow about her possible failures as a parent. Case closed.

The one thing Bobby Jindal knows, to the core of his rotted soul, is the massacre that occurred last week, like all the other massacres before it and all the others most assuredly to come unless some brave non-pussy is man enough to stand up to the would-be killers, has nothing to do with guns. After all, as Jeb Bush said, "stuff happens."

And anyone who dares suggest otherwise -- the president, liberals in general, and the father who should be hiding in shame instead of calling on us to find a way to stop it from ever happening again -- owes everyone in America an apology. Especially Bobby Jindal.