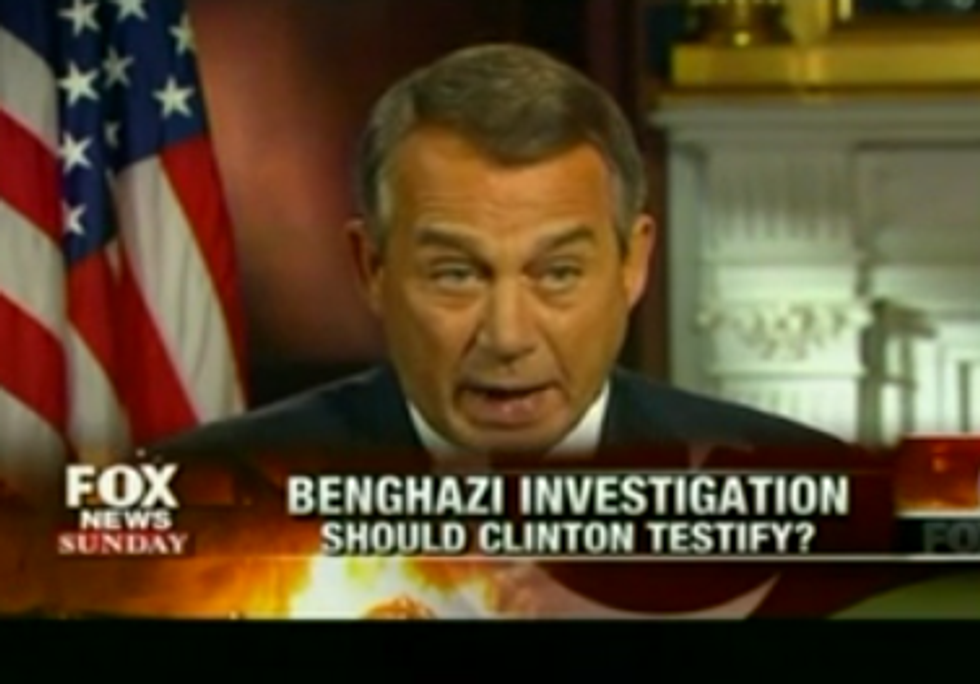 Even though the Benghazi "scandal" has been investigated approximately eleventy-nine times (seven to be specific), and even though the Republican-controlled House Intelligence Committee did their OWN investigation, and all seven of these investigations found absolutely no scandal, you are probably aware that the Republican House is currently investigating Benghazi for an eighth time. Why? Well obviously, dum-dum, because House Republican investigatin' committees have a WELL KNOWN LIBERAL BIAS, and they just know that Republicans are trying to hide the facts about what REALLY happened in Benghazi, from themselves! Of course, we completely know what happened in Benghazi, except that NO WE DO NOT, let's keep asking the same things until we get the answers we want, at which point, INPEACH!

John Boehner appeared in his traditional orange face on the Fox News Sunday program with Chris Wallace, who suggested that SOME SAY maybe all this constant investigation is a way to try to hurt poor Hillary Clinton, who is currently poised to win the presidential election over whatever goober the Republicans pick, even if she doesn't actually run. Since Hillary Clinton was Secretary of State then, could they possibly be trying to destroy her with a non-scandal that no one important in America cares about? Boehner says no, Chris, we just need ANSWERS:

"No, Chris, the idea here is to give the American people the facts about what happened. Why wasn't the security for our embassy in Libya -- the extra security -- given to the ambassador after repeated requests? The night of the event, why didn't we attempt to rescue, uh, the people that were there? Why were the people there told not to get involved? And then, as importantly, when did the President know this? And why for some two weeks did he describe it differently than what it really was? There are a lot of unanswered questions..."

Yes, you see, all the Republicans who like to yell "Benghazi!!!!!11!" at each other have this worksheet with questions about Benghazi and fill-in-the-blank spots for answers, but none of them have filled out their worksheets, because they are NOT SATISFIED with what they've heard so far.

But this is definitely not about Hillary Clinton, because please, the House GOP is not yet able to see past their spitting hatred for Barack Obama enough to even really think about 2016 yet. This, just like all their other time-wasting, is about the President. They are just SO SURE that one day they'll finally find a smoking gun and they can finally get rid of the Kenyan Obummer for once and for all. We actually suspect that SOME of the wingnuts are so consumed with their irrational fear and loathing of the man that they'll spend many years AFTER his presidency, just still investigatin' away, so that they can retroactively declare John McCain and Mitt Romney were the presidents from 2008 to 2016, and we can get on with the important business of actively pretending that the Marxist liberal gay communist reign of gay Ken-do-neesians never happened. Also, Reagan probably in there somewhere.

Anyway, in the interview Boehner says he doesn't know if they're going to call Hillary to say words to their committee of obsessed dorks, but he might have been saying a fib, because this report from Glenn Beck's blog site (Right? Who do you believe? Does it even MATTER with the right?) says everybody got a memo on Friday about how she was totally coming to answer all their hard-hitting and dumb questions. Or maybe Boehner just didn't check his e-mail because he was out all day Friday being professionally made more orangey for his big interview on Sunday, could be either, don't know don't care.