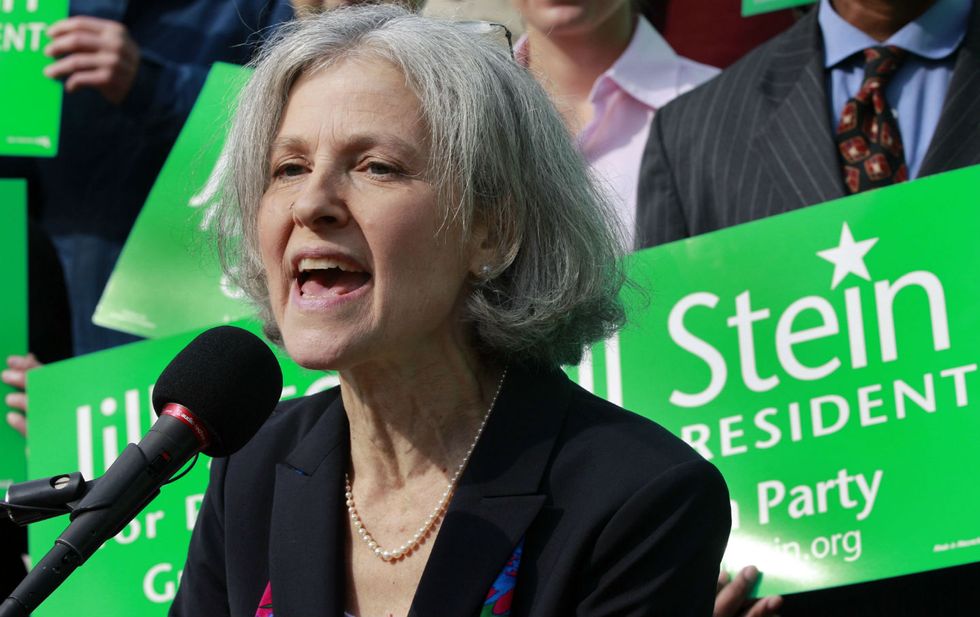 Jill Stein, who is just doing SO GOOD in the polls, had thoughts on the 'bortion section of Tuesday night's vice presidential debate:

WAIT WHAT? Women should decide whether women have a right to control their bodies? We thought it was a given that women should control their own bodies, that that was something all good patriotic, liberal Americans just AGREED ON. Maybe Stein just can't words very good and that's what she meant.

BUT WAIT WHAT ALSO TOO? Was Jill Stein watching the debate, or was she too scared to turn on her Obamaphone or her Apple TV, for fear of Wi-Fi radiation eating her brain? Because this is actually what Tim Kaine said, about women's bodies:

And we don't think that women should be punished, as Donald Trump said they should, for making the decision to have an abortion.

Governor Pence wants to repeal Roe v. Wade. He said he wants to put it on the ash heap of history. And we have some young people in the audience who weren't even born when Roe was decided. This is pretty important. Before Roe v. Wade, states could pass criminal laws to do just that, to punish women if they made the choice to terminate a pregnancy.

What goddamn part of that makes Tim Kaine an adversarial participant in "two men arguing over whether women have a right to control their bodies"? What part of Kaine's statement can be remotely interpreted as NOT wanting women to have that right?

We assume Jill Stein would want her own running mate, who is a dude, to argue just as Tim Kaine did, and that she is just being, as usual, a dick.

Sorry, Jill Stein is officially now too much of A Idiot for us to cover here at Wonkette. If her polling numbers were anywhere higher than APPROXIMATELY NOBODY PERCENT, then maybe we'd have to suck it up and deal with her.

Instead, we are using our God-given free will to say fuck her, we are not reporting on her no more, unless she spontaneously 'splodes, and even then we might not cover it if something more politically important like "Brangelina Fucking Again" happens that day.

Fuck it, is what we are saying.