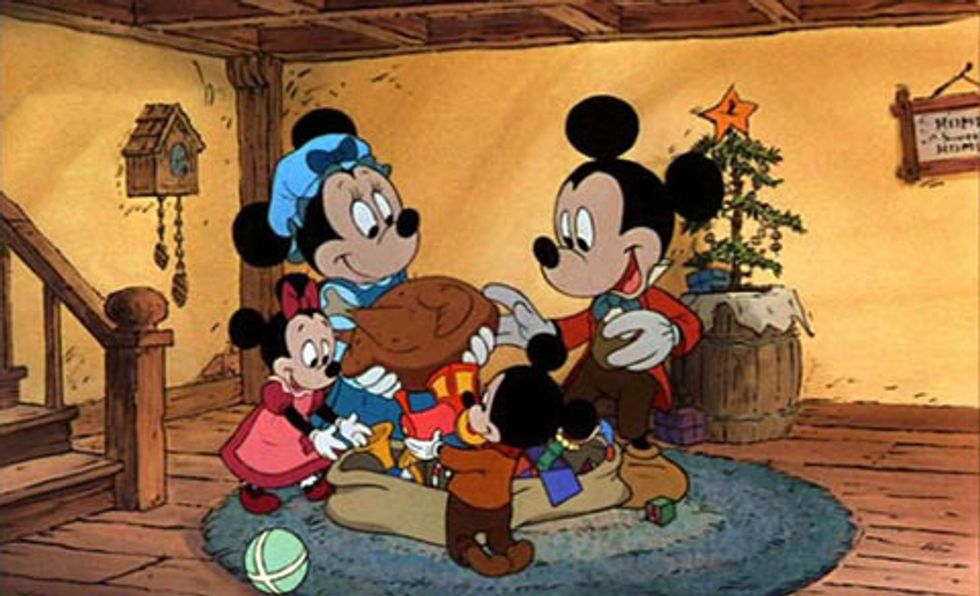 This is a fucked up story, but hey, it's Mickey and Minnie Mouse in "Mickey's Christmas Carol"!

Yay, more jolly Christmas stories! This time we have a traditional holiday classic, about how an elementary school in Lancaster, Pennsylvania, canceled its annual production of A Christmas Carol, because it took up too much classroom time to put on, and also out of respect for the diversity of the school's population. In an unrelated story, a Jewish parent had asked a while back if their Jewish kid could be excused from the production, but didn't say they wanted it canceled or anything. So, of course, Breitbart and Todd Starnes over at Fox News reported this story completely straight, and everyone, including the Jewish family, lived happily ever after, right? HAHAHA, SHUT UP, they unleashed a torrent of anti-Semitic hell on the family, which has led the parents to yank their kid out of the school and get the eff out of the county. Oops, this one's not a jolly Christmas story either. Well, shit.

'Splain us what happened, Mark Joseph Stern at Slate:

Centerville Elementary School has put on a production of Charles Dickens’ A Christmas Carol for years, but educators have grown concerned that the play requires 20 hours of classroom time to produce. Changing state educational standards no longer allow for that luxury, Principal Tom Kramer noted in a post explaining why the school had cancelled the play. Educators also called off the production because they wished “to be respectful of the many cultural and religious backgrounds represented by the students.”

Stern notes that the school specifically says the Jewish parents who, AGAIN UNRELATED-LY, asked if their kid could could be excused from "God Bless Us, Everyone!" had zero, zip, zilch, nada to do with the decision to cancel.

Show us your War On Christmas erection, Breitbart:

A principal at an elementary school in Pennsylvania has canceled its production of “A Christmas Carol” due to complaints about a line said during the play and concerns about it taking too much time out of classroom instruction.

Officials ... said they canceled the play because it took too much time away from classroom instruction, but many parents believe it was because two parents complained about a line said in the play, Fox News reports.

THE SECOND PARAGRAPH DEBUNKS THE FIRST ONE. The fact that "many parents believe," baselessly, that these mean crabby Jewishes did the War On Christmas to them is not germane to the story, unless you, Breitbart, are trying to stir up some anti-Semitic hate.

Parents told local reporters the play was canceled because two parents complained about a line in the Charles Dickens holiday classic.

The unnamed parents took offense at the words uttered by Tiny Tim, “God bless us, every one," television station WHTM reported.

That’s a mighty big clue, folks. In order to be tolerant and diverse, public schools have to eradicate any mention of God. [...]

... [T]his year, I’m afraid Tiny Tim’s goose has been cooked by the Ghost of Christmas Intolerance.

WAR ON BABY JESUS, BETTER GET OUR PITCHFORKS!

Slate sends us to Lancaster Online, which lets us know how this nice Jewish family is feeling right now:

After seeing reader comments like “It would be nice if we had the addresses of those concerned citizens and, I bet, this info is known to people living in the area” on the Breitbart story, the parents pulled their child out of school and headed out of the area for a bit.

“There’s no way we’re going to take a chance after the pizza incident,” they said, referencing the man who fired an assault rifle in a Washington D.C area pizzeria after reading a fake-news story that said Hillary Clinton was running a child sex ring out of there.

Hillary's child sex ring at the pizza parlor! Jews stealing Christmas! Innocent people fleeing to safety because fact-free, bigoted, Trump-supporting horse turds will believe literally ANYTHING they read, as long as it reinforces their fact-free bigotry!

IT'S A CHRISTMAS MIRACLE, no wait, it is not a Christmas miracle, it's just another example of how shitty some of the people in this country are. God bless us, everyone, indeed.