BREITBART SIRENS! TRUMP UNDER HOUSE ARREST/COUP, ACCORDING TO IDIOTS! 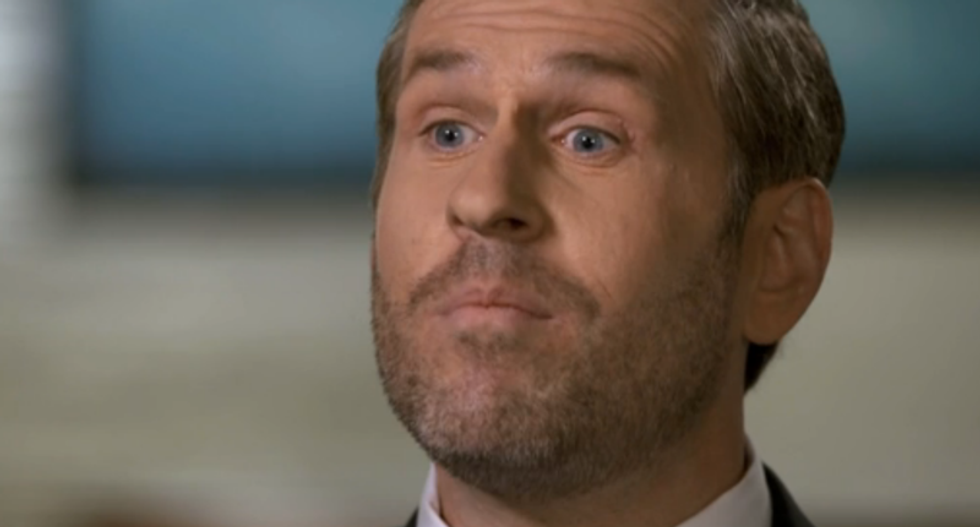 We learned several things from noted idiot Mike Cernovich'sinterview with Alex Marlow, editor-in-chief of number one state-media website Breitbart.com. Don't get us wrong, we didn't listen to it, since come the fuck on like you would either. But we read the adequately literate summary by Luke Nolan, and it had stuff in it.

FOR INSTANCE! Did you know that General John Kelly, Trump's chief of staff, has him under HOUSE ARREST and is doing a COUP at him, by being the gatekeeper to the president and not letting all the lunatics just stumble drunkenly into the Oval Office screeching about ... we don't know, whatever Breitbart's talking about today? (Pizzagate. It is always Pizzagate.) It is true! It is almost like Mike Cernovich doesn't know that that is actually the chief of staff's main job description!

(All transcripts are by Nolan; we have no idea how accurate they are, as we will not be subjecting ourselves to the audio. For all we know they're as loosely connected to this dimension as a White House transcript is!)

Marlow: [T]he first place where it starts in your dispatch is that Trump is on house arrest and you cite John Bolton who people thought was under consideration for National Security Advisor, for Secretary of State who can’t even have access to the President right now and this is a pretty big departure from campaign trail Trump.

Cernovich: Exactly, so I’d heard from people that Trump is on house arrest. I thought ‘oh c’mon, the President of the United States, that’s the weirdest thing I’ve ever heard’, but I kept digging into it and I kept hearing the same thing over and over again and then, of course, John Bolton wrote his column for National Review and he’s begging people to retweet it, he said ‘this is the only way the President is gonna see it,’ and I’ll say Alex, I don’t really understand, how can Trump not see who he wants to see? This is something I don’t really fully comprehend within the White House. I have talked to a lot of people, it’s a very weird situation.

Blah blah blah so much stuff about John Bolton, and how John Kelly won't let him see the president, or Sebastian Gorka, or Steve Bannon, or ...

Marlow: Coup is a strong word, but it’s very hard to argue against it at this point.

Or it would be quite easy. Like, here is Wikipedia, in the page for "White House Chief of Staff."

Or how about this book, which came out in April, about White House chiefs of staff? What is it? Oh, it is called "The Gatekeepers: How White House Chiefs of Staff Define Every Presidency."

Or this documentary from 2013,The Presidents' Gatekeepers -- or SO BARACK OBAMA WANTS YOU TO THINK.

I am pretty sure our point here is that "not letting John Bolton into the Oval to eat the president's face off, mussing up his booshy moostache" is pretty SOP for White House chiefs of staff!

Mike Cernovich, who thinks John Kelly is doing a "coup" and a "house arrest" to the president of the United States, also thinks this one guy who bumped into him was an actual demon ...

“But my life is in danger, my life is in jeo… You can go look at that guy, and if you look at him, you can tell that he had a vacancy in his eyes, he had a very much a serial killer, very creepy, creepy vibe. And just being around him I felt like an evil, demonic kind of presence. And I looked him in the eye and I could tell this was not a human being. This was some kind of, I don’t know, a replicant, a demon, or something. And that just goes to show how dangerous it is for everybody who is actually doing real journalism.”

Frankly, we're surprised the Alex Jones Trucker Speed in Mike Cernovich's brain left it at "coup" and "house arrest" instead of ... well, shit. What kind of hilarious joke would you invent about a silly thing a raving lunatic would think when they already think Martians are kidnapping child sex slaves from the pizza restaurant basement?

Anyway, that was at Breitbart News Daily, which is the president's main source of news and from which he appointed half his advisers, don't gnaw your own face off, and have a terrific day!

Wonkette is ad-free and doesn't get a DIME from the Mercers! We get all our dimes from YOU! Please and thank you!