Breitbart's Ghost: Obama Exploited Catholics By Being Endorsed By Them 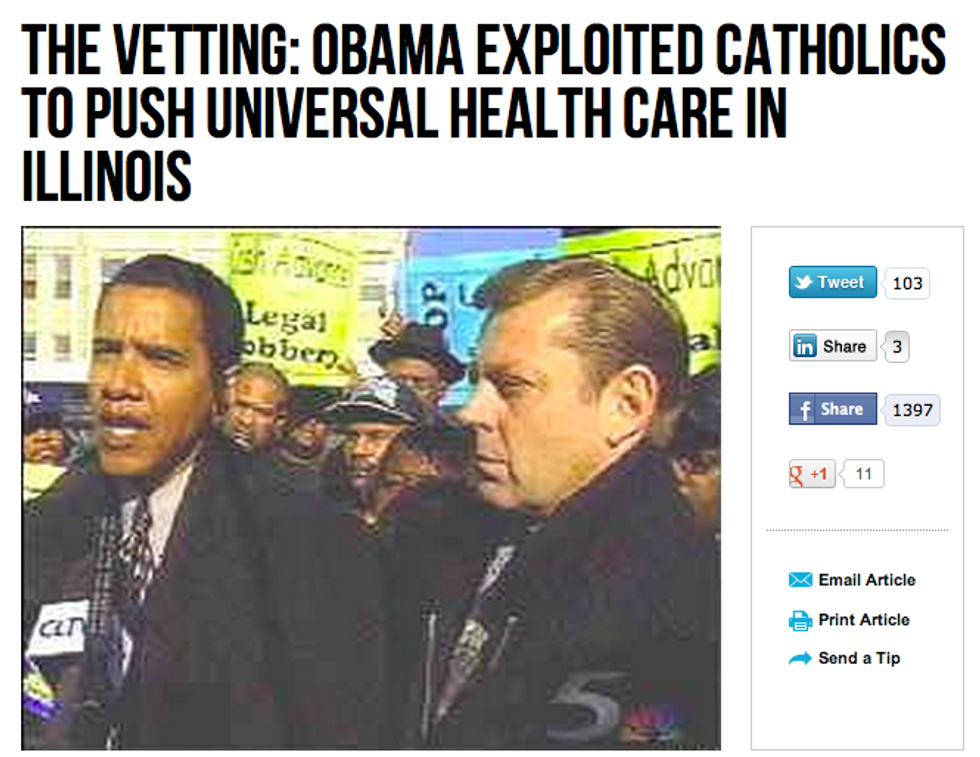 It isWar on Catholics Day here at your Wonkette HQ, because there is nothing Barack Obama won't do to Ruin Easter. He hates Catholics so much that he worked for a super-anti-Catholic Catholic Cardinal, at whose Catholic-hating knee he learned to make war on Catholics in the first place. And now Ghost of Breitbart's The Vetting Two: Moar Vettening reveals even more of his dastardly plan to make war on Catholics by working to enact the Catholics' anti-Catholic plan for universal healthcare. (Oh yeah, even Pope Nazi, the least favorite pope of "liberal Catholics" as if there could ever even be such a thing, says nations must provide healthcare for their citizenry because it is a moral imperative and one of the "inalienable rights" of man, because he is anti-Catholic too.) Anyhoo, here is how the newest Vettening begins. (Please remove all children and pregnant ladies from the room. Viewer precaution is advised.)

In 1999, then-State Senator Barack Obama invoked the late radical Cardinal Joseph Bernardin, who passed away in 1996, to promote a universal health care law he co-sponsored and which Illinois voters had overwhelmingly rejected.

The bill incorporated language directly from the late cardinal’s 1995 pastoral letter, “A Sign of Hope,” which argued for a “fundamental right” to healthcare, reading, in part: “Health care is an essential safeguard of human life and dignity, and there is an obligation for society to ensure that every person be able to realize that right.”

You're right, Ghost Andrew Breitbart, that is PRETTY FUCKING BAD. But is there more? There is more!

Supporters of single payer health care, like Dr. Quentin Young of Physicians for a National Health Program, understood Bernardin to be calling for a government takeover of health care. "Cardinal Bernardin wrote on the moral questions we're talking about," Dr. Young told the Palm Beach Post on January 4, 1998. “His concept was that human dignity requires an ethic that assures health care to all people in a society.”

Supporters of the so-called “Bernadin Amendment” quickly roped in Dr. Warren Furey, the cardinal’s personal physician and chairman of the Department of Medicine at Mercy Hospital.

The law, had it passed, would have forced the state to enact a plan that, in the Orwellian words of the Chicago Tribune, “permits everyone in Illinois to obtain decent health care on a regular basis by 2002.”

We are not sure how those words are "Orwellian." Neither, presumably, is Charles C. Johnson, the author of this terrifying battlefield report from Obama's Bloody Siege on the Catholic Church. What else? Blah blah blah, some dick priest endorsed it but he also "housed" Hoodie Congressman Bobby Rush, plus Jan Schakowksi's husband went to prison once. There is not even any Critical Race Theory in this one, guys! Lame.

Anyway, it ends like this, not with a bang but a whimper:

Catholics--both liberal and conservative--now know that the price of faith in Obama: the destruction of the religious liberty in which all Americans, especially Catholics, believe.

zzzzzzz sorry, what? We have fallen asleep with sadness for what poor dead Breitbart's "gotchas" have become. Needz moar O'Keefe proving liberal Catholics committed voter fraud by being Catholic or something we don't know none of it even makes sense anymore. Hoppy Easter! If Obama hasn't already OUTLAWED IT. [Breitbart'sBigSadness]