Breitbart's Milo Knows How To Make Women Happy, And It Is By Uninventing Washing Machines 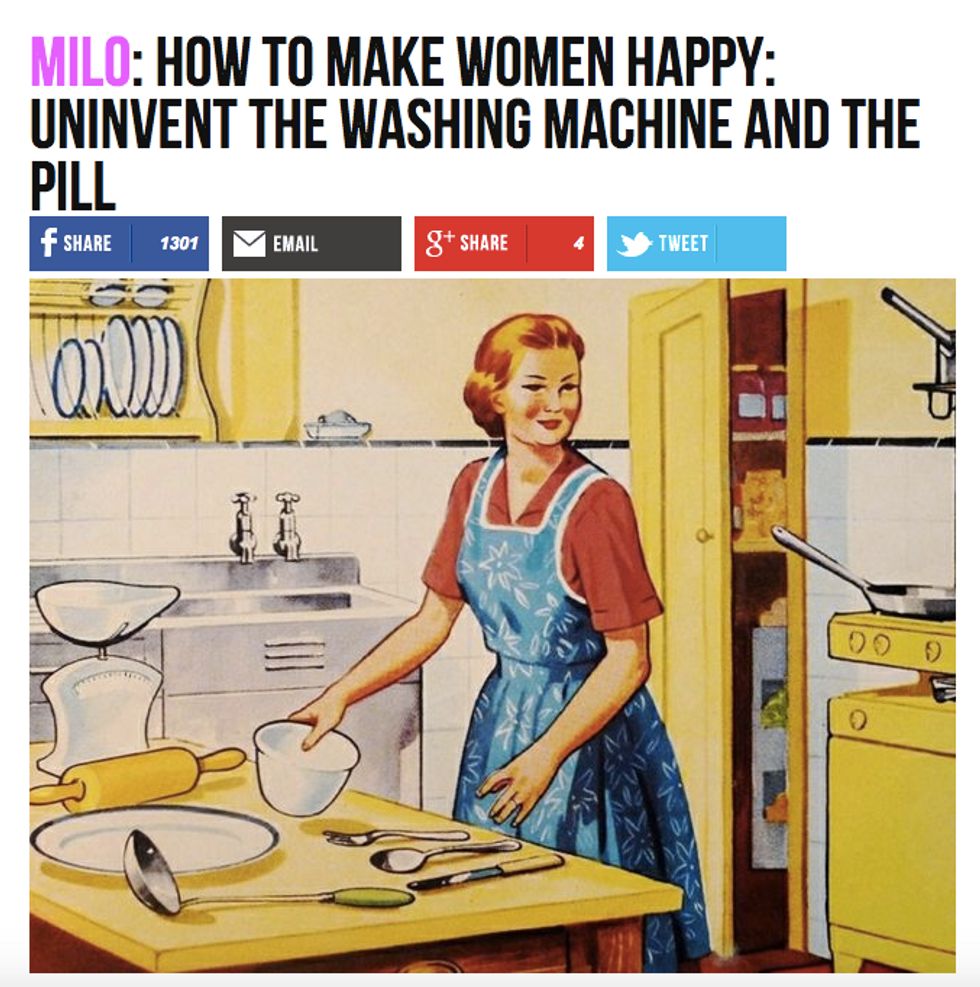 HEY LADIES. Did you know that you are very unhappy these days? It's true! At least according to Breitbart, a website that is in no way sexist or racist at all. But thankfully, alt right columnist and loud and proud Trump supporter Milo Yiannopoulos has figured out what will make us happy, and it is having to do laundry by hand and not being able to have sex without worrying about getting pregnant.

Milo argues that the invention of the washing machine "forced women out of the home they so lovingly kept, wrenched their children from their arms and doomed them to perform unsatisfying tasks in the workforce in order to respond to new social norms." Which I'm not sure is true! Because I'm pretty sure that there was never any great "Hey ladies! You've got washing machines now! Welcome to the workforce!" parties thrown by the menfolk anywhere. Especially considering that washing machines first became widely available in the 1950s, the supposed golden era of the housewife.

He then argues that "the pill" has made us all miserable as well! Why?

Birth control makes you fat, and as we all know being fat is disgusting and should never be allowed in a civilised society.

Yes. That is his point. Most of it, anyway. That and he thinks that if women weren't on "the pill" they would want to sex up manlier men, and the pill makes them want men who are more "feminized" and then because of that more men become "feminized," which is not a thing Milo Yiannopoulos approves of! Oh, and then we cheat on those feminized men, or something.

Healthy, fertile women seek out men who are genetically different to them. Women on the Pill do the opposite, seeking out men who are closer to their own tribe. This perhaps is an explanation for the rise of feminized males, so desperate to get laid that they mimic the behaviour and mannerisms of women.

They’re destined for heartbreak though. It’s well established that women lust after rugged, manly men during their fertile cycles, and prefer baby-faced “provider” types outside this period. Indeed, this alternating pair of desires is the leading cause of female infidelity.

It is really nice of Milo to think about our happiness! Obviously, women are SO STUPID that we cannot even figure out what would make us happy, and we need a man to tell us what would. And we can't even say to ourselves "Hey! I sure would be happy if we didn't have a washing machine and birth control, perhaps I will not have a washing machine or go on birth control!" No, they must be forcibly taken from us. For our own good.

Me? I'm not so sure about that! Because I certainly prefer having a job and getting money to standing around having to wash clothes all day! That seems pretty boring and depressing! Especially since this is taking place in a magical and blissful utopia in which I only get to have sex if I would like it to result in a human being I have to take care of for the next 18 years. Also, the Amish don't have washing machines or birth control, and they sure seem to do a lot of meth -- which makes me think they might not actually be that happy at all!

Now, you might wonder -- if staying at home and doing laundry and taking care of children all day would make women so joyful, then why don't men want such a luxury themselves? One would think they would be lining up for that! However, Milo explains that women should do it because they are just naturally better at it, and that's why it fulfills them so much.

The role of the housewife has been thoroughly and ritually humiliated by successive waves of feminism — as if raising well-adjusted children, keeping a beautiful home and marrying a loving husband is worthy of derision and ridicule. In fact, it’s one of the most important things a woman can do with her life and may be one of the only things women can actually do better than men.

Oh. Well! That makes sense then! It's so weird, really, how the thing that would make women most happy is doing exactly what conservative men would prefer they do, rather than deciding for themselves what would make them happy. Maybe it is because we have tiny lady brains that are incapable of doing much more than making sammiches and wringing out laundry and whatnot, and cannot even conceive of what would make us happy? Probably it is that.

Either that or -- as one commenter suggests -- we were merely the unwitting tools of the NEW WORLD ORDER:

Now, as you may know, Milo is a gay man. There are a lot of people out there who believe he would be happier if he were to stop being a gay man. One wonders why he doesn't take their advice and just step back in the closet and have a nice lavender marriage like so many gay men did back before they invented washing machines? Surely they know more about what would make him happy than he does, right?