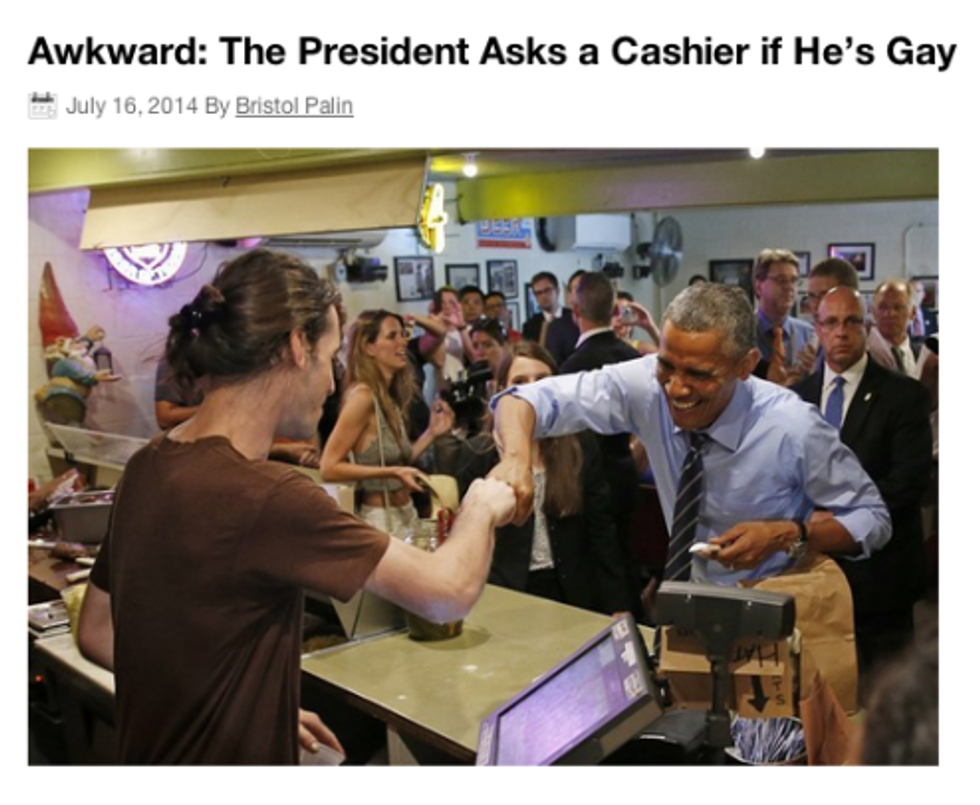 Hey kids! It is time once again for Bristol Palin to smear someThoughts at us! What is our topic for today? It is how the "president" had a gay sex fist bump, per Ben Shapiro, or "five short paragraphs from the National Review Online followed by two sentences 'by' Bristol Palin, neither of which has a verb because verbs are for LOSERS."

Let us now paste the entirety of Bristol's bloog here for you once again, because we are kind of cocks like that:

This is one of the weirdest things I’ve read:

During his recent trip to Austin, Texas — after shaking hands with a guy wearing a horse head in Denver — President Obama’s had an exchange with an employee of a popular joint that is raising eyebrows. When the president got up to the register (after cutting in line) at Franklin Barbecue, he was met by cashier Daniel Rugg Webb.

“Equal rights for gay people,” Webb said to the president.

“Are you gay?” President Obama asked, which apparently is a perfectly acceptable, not weird thing to ask that doesn’t involve making any assumptions.

“Only when I’m having sex,” the cashier responded.

The president laughed at Webb’s comment, before saying, “Not in front of the kids.” The two bumped fists before President Obama went on his way.

Obama, as President… just like Washington, Lincoln, and Reagan. Classy.

Oh hey we thought of a thing that maybe explains why the NRO and Bristol Palin are confused by this "awkward" exchange: the question "are you gay?" isn't always followed by an assault! Also too, some people can ask another person if he is gay without their faces curling in on themselves in utter disgust! Sometimes, it is just a question, especially if the person who is being asked has just said something like "equal rights for gay people!" Also too again also, some people don't think being a gay homosexual is a shameful secret best kept (ashamedly) by the secret homosexual!