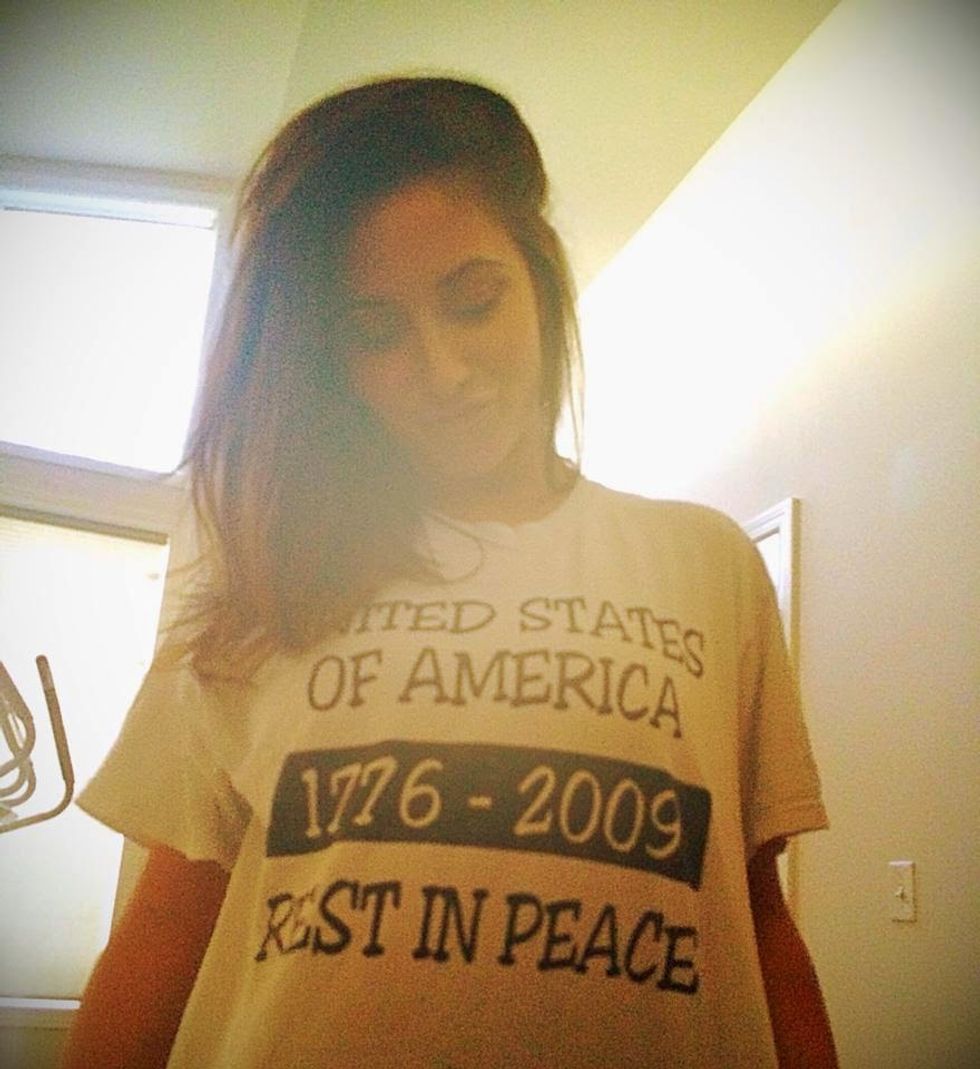 We THOUGHT we told Bristol Palin to STFU about that lovely Muslim science nerd smarty-pants kid, Ahmed Mohamed, who was so proud of himself for inventing a little clock that he wanted to rush to school and show it to his teachers. That lovely kid who THOUGHT his teachers would be excited for him, and would encourage him, but instead decided this was a great opportunity to make a little brown Muslim boy feel like shit for being a little brown Muslim boy. Because, to be clear, NOBODY THOUGHT IT WAS A BOMB. If they had, they would have evacuated the school.

Thursday, Bristol was jealously yapping her sexually abstinent mouth about how it's just terrible that the president invited Ahmed to the White House, because you know what makes racism happen? Being nice to Muslims, right after the good Christian cops and teachers of Irving, Texas, scored points with Asshole Jesus by treating a Muslim like shit.

Well, hey, and OH GOODY, Bristol has more "thoughts" to share on the subject:

Really? Because Bristol knows what ALL THE PENCIL CASES look like? Is that where she keeps her birth control OH WAIT LOL SHE KEEPS HER BIRTH CONTROL "NOWHERE."

But as it always is with rotten Palin brains, it gets so much worse. You see, she's worried about those kids who draw pictures of guns and ninjas and dinosaurs going "RAWR!" at little army guys, and about how kids have been threatened with expulsion for those things, and you know what? Yr Wonkette's worried about that too! As we explained just today, some of that has gone overboard, but "[it's] not so much a liberal thing as it is the brainless function of institutions where Keeping Order is a matter of brainlessly looking for excuses to punish ANYONE."

But in Bristol's telling, that's not how it is, and she should know, because she's as good at thinking as she is at getting knocked up by Jesus:

I get so scared Tripp may accidentally bring a nerf gun to school. [...]

The media down plays this incident as an alarm clock made in pencil case… that doesn’t look like a pencil case to me.

I’m sure the race of this student didn’t play any part of the schools protocol for something like this.

No? Bristol, in her tiny twat-bird brain, thinks the fact that the kid's name is "Ahmed" and he built a clock with wires had NOTHING to do with what happened? And she really thinks poor little Tripp Palin might accidentally get arrested for being a Muslim Nerf-Nerd one day, and have to endure the humiliation of his teachers assuming he's a terrorist because he's a kid who likes to shoot his fucking Nerf gun? IS THAT A THING IN AMERICA, BRISTOL?

And what exact "protocol" are we talking about, you dumb bastard? Because while there seems to be no official protocol for Texan "educators" making Muslim children feel unwelcome and hated -- they just wing it and hope it works out good! -- there IS a protocol for suspected bombs, and it involves bomb squads and evacuations and all sorts of other things. None of that was followed because they DIDN'T THINK IT WAS A FUCKING BOMB, which means that the cops who handled this might be fucking assholes, but at least they're smarter than Bristol "I'VE USED PENCIL CASES AND YOU SIR ARE NO PENCIL CASE" Palin.

Back to Sarah Palin's pride and joy:

I know not all law enforcement is ethically correct (we have crooks everywhere), but I cannot even imagine how much more ‘protocols’ they will have to follow during an investigation of anyone who isn’t white.

Not everything is race based and most police, and law enforcement in general, are just trying to do their jobs. Let them do their jobs, and stop looking for reasons to cause riots.

I hope and pray my kids grow up in a “colorblind” generation like I thought I did, this is getting worse and worse everyday with stories like this.

THIS is what separates people, and makes soo many people victims. We need to look at the bigger picture, and stop blaming law enforcement for doing their jobs.

You know, Bristol, we're going to say it again. SHUT THE FUCK UP. Nobody is "looking for reasons to cause riots" over this. In fact, the decent citizens of this country are bending over backward right now to make sure little Ahmed knows he is welcome in this country, and to pay no attention to the types of Americans who read your blog and click "share," or who subscribed to your dreadful mother's Quittin' Grifter Channel for non-mocking reasons.

And OF COURSE there are great law enforcement officers out there, but this was not an example of that. This was racism and hate, and if you are too stupid to see that, and to see how it has ZERO NADA ZILCH FUCK-ALL to do with you, then maybe you should stop trying to add to the American Conversation and stick to Not Making Babies For Jesus.

[Bristol's thing she calls a blog]