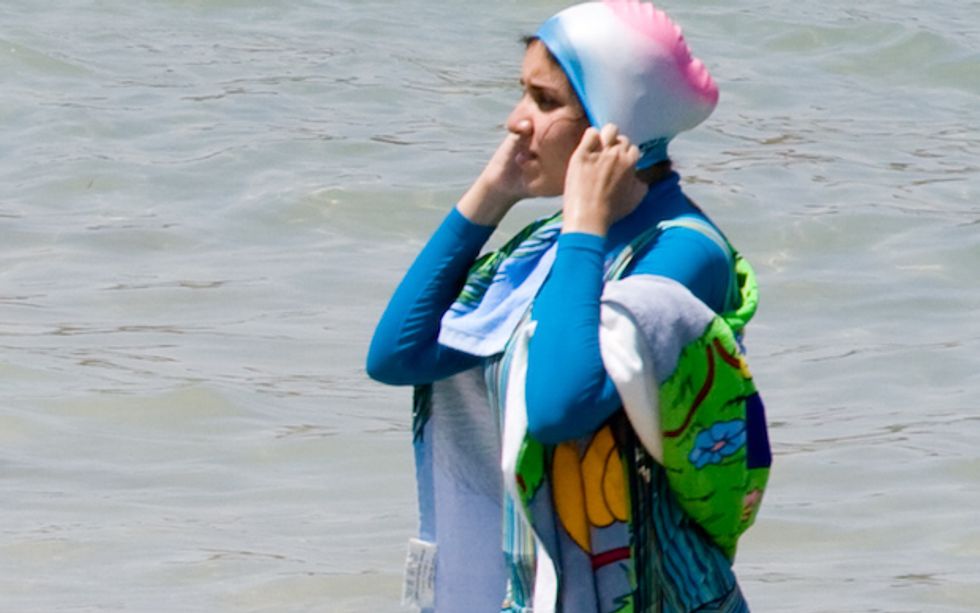 There is quite a big debate these days, over in Europe, about whether or not Muslim women ought to be allowed to wear "burkinis" -- bathing suits that fully cover the skin and hair of the Muslim women who choose to wear them. Apparently, it is far more offensive for Muslim women -- or any women -- to cover up this much at the beach than it is for them to be that covered up in their daily lives.

According to those who support these bans, it has something to do with terrorism somehow, and also that they don't want these women to be oppressed by those who would tell them they have to wear burkinis to the beach, but rather by those who would prefer they wear bikinis to the beach. Or something? Burkini bans are a thing in several places in Europe and Africa -- and, notably, one was just overturned by a court in France.

But one British woman is hoping she will get to see the day when the garments are banned in her country as well!

Writing for the Telegraph, in an article titled "Burkinis? Here's Why We Should Fight Them On The Beaches," Allison Pearson insists that the burkini ought to be banned in Britain, because she thinks it is her business to go around telling people what they can wear at the beach. Pearson herself was recently traumatized by having witnessed a woman in one, playing with her kids at the beach and otherwise leaving everyone else alone:

On a bathing platform in Turkey, I found myself sunbathing next to a Muslim family. The father strutted about in a pair of teeny red trunks, just visible beneath the landslide of his vast belly. The mother wore a black and orange burkini, which left only her face, hands and feet exposed. She looked like a broiling penguin, clearly suffering in the intense heat. Their lovely children – two girls and a boy – jumped into the water again and again, as lithe and playful as porpoises.

I found myself gazing at the little girls and wondering how long. How long before they had to put away their pretty bikinis and their Caramac tummies, how long before they would never know the bliss of sun and sea on their skin again? I gave them about two years, poor mites. No such loss of freedom or pleasure would trouble their brother.

Pearson was so deeply upset by this, that she determined that it would be better for Muslim women to not go to the beach at all, rather than have them go and wear burkinis. Because she loves freedom, and hates the idea of a man telling a woman what to do! And she wants to put a stop to it, even if it means that those ladies feel they cannot go to the beach at all. Because freedom! The freedom to say "BIKINI OR GTFO!"

As the battle of the burkini rages in France, some commentators have claimed that at least this ludicrous garment affords Muslim women the opportunity to go swimming, when they might otherwise be locked away. I find that argument gives me the same sinking feeling as a sign on the gate to a meadow saying, “Dogs Must Be Kept on a Lead”. What appals[sic] is the way that Western women protested outside the French embassy waving a sign saying: “Non Islamophobia. Oui aux burkinis.” How dim and deluded can you be? France’s objection to the burkini, and its ugly sister the burka, arises from a love of women, not a hatred of Muslims.

YES. Don't you get it? They love them so much that they don't want to see them at the beach!

Pearson goes on and on and on about what a fantastic feminist she is for telling other women what they ought to be allowed to wear to the beach. Because, she says, the Muslim religion is very misogynistic.

Now, hey -- am I gonna argue that there are no misogynists who are Muslim? Of course not! They exist just as Christian misogynists do! However, I also know a number of super badass feminist Muslims who don't take shit from any man, and who wear hijabs for their own religious reasons, not just because a man told them they have to.

She then goes on to suggest that if some Muslim women who choose to wear burkinis wear them on the beach, then other Muslim women will be intimidated into doing so. Which, still, doesn't seem like it's her business.

The real reason, however, she thinks burkinis ought to be banned is that they could bring about SHARIA LAW. Wait, hold on. Not onto the Sharia law quite yet. Pearson first gives another example of a thing she witnessed, in which a bunch of female Muslim students refused to shake hands with the Principal at a graduation ceremony, or wore gloves to do so:

The key question is where does authority lie if too much is conceded to minorities? Consider a small clash of cultures right here in the UK. At a graduation ceremony for one college in the University of London, proud parents look on as their offspring queue up to receive a handshake from the Principal. The audience includes my friend Jackie. It should be a joyful occasion, but there is unease in the room. The female Muslim students put on gloves to shake hands with the Principal or they hold out their programmes to signal they do not wish to make physical contact with him.

Wow! How dare a woman decide who she would like to touch! This is political correctness RUN AMOK! Clearly, allowing this sort of thing will eventually lead to all Britons having to abide by Sharia Law.

The Iranian and Kurdish Women’s Rights Organisation says it wants all women to have the protection of the mainstream British legal system. Yet, slowly and insidiously, Islamic laws and practices are allowed to take root and it then falls to the host country to challenge them. It ends up making us look intolerant, when what we are guilty of is being too tolerant by half.

We don’t need an inquiry into how well or how badly Sharia courts are discriminating against women. We simply need a ban so discrimination isn’t even a possibility.

Yes. Laws and practices like not shaking hands or wearing what you would prefer they wear to the beach. How horrifying! Surely allowing this will lead to the entire country just deciding to abandon their own laws entirely and live by Sharia Law. That seems very plausible. It would be so much better to just say "Hey, Muslim women, don't come to the beach unless you are willing to violate your religious beliefs!" That will solve everything.

Oh. Except the problem of non-Muslim women who may also go to the beach fully dressed. Like say if a non-Muslim woman just wandered down there in their regular clothes, and was maybe wearing a scarf that day because they wanted to get their Jackie O on, would she be asked to leave? Or if another non-muslim woman was wearing one of those surf suit things and also an Ethel Merman-style bathing cap? Would Pearson want them banned from the beach? Probably not! Probably no one would complain! Because it is weird to give a shit about what other people wear to the beach, so long as as they are not entirely naked on a non-nude beach or wearing a suit made entirely of knives.