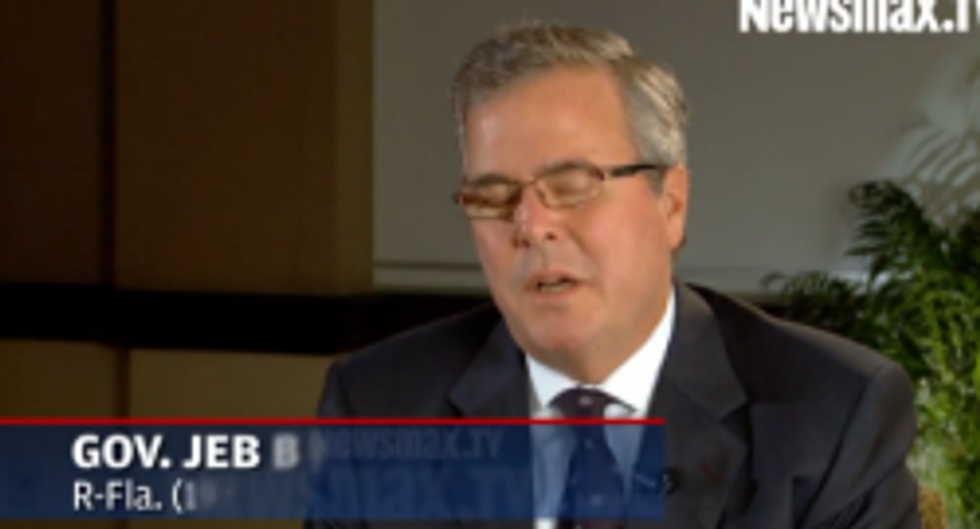 Jeb Bush, the former Florida governor and brother of greatest US American president in the history of the world, George W. "W." Bush, thinks one certain current US American president Barack Q. Nobummer is achildish 10-year-old child -- a "boy," if you will -- who uses barnyard words like "bullshitter" and thus has demeaned the presidency forever so why would you even tell your kids they could be president someday anymore, what do you want them to do, grow up to be black?!

[I]n an interview with Rolling Stone, Obama used a barnyard epithet to refer to Romney. “You know, kids have good instincts,” Obama said. “They look at the other guy and say, ‘Well, that’s a bull***tter, I can tell.’”

Asked if the president’s personal attacks demean the office of the presidency, [Jeb] Bush replied: “It does, but here’s the sad reality: We have a temporary time in American history where our culture has been coarsened, where people’s expectations are low. We’re living in a different time.

Also, he is a child and children should not try to be president anymore, because of childishness and swears.

“When you act like that, it’s kind of hard to say as a parent to your child, ‘You could be a president of the United States.’ Maybe there are other avocations that might be something that would create greater pride. Sadly, when you act that way, people begin to diminish the importance of the presidency,” Bush said.

But it isn't just the vile barnyard poopy talk that has one Jebby so very Church Lady, because that would be incredibly dumb, and Jebby, remember is "the smart one."

Oh wait. Yes it is, actually. Barack Obama said "bullshitter" and made fun of Miffed Romney's "Romnesia." That is the extent of Genius Jeb's complaint about the coarsening of the presidency. Man, we remember the old days, when you at least had to get a blowy in the Oval before it needed to have its honor restored.