Bryan Fischer: Teh Gheys Can't Be Scouts Because Scout Oath Says No Weaklings 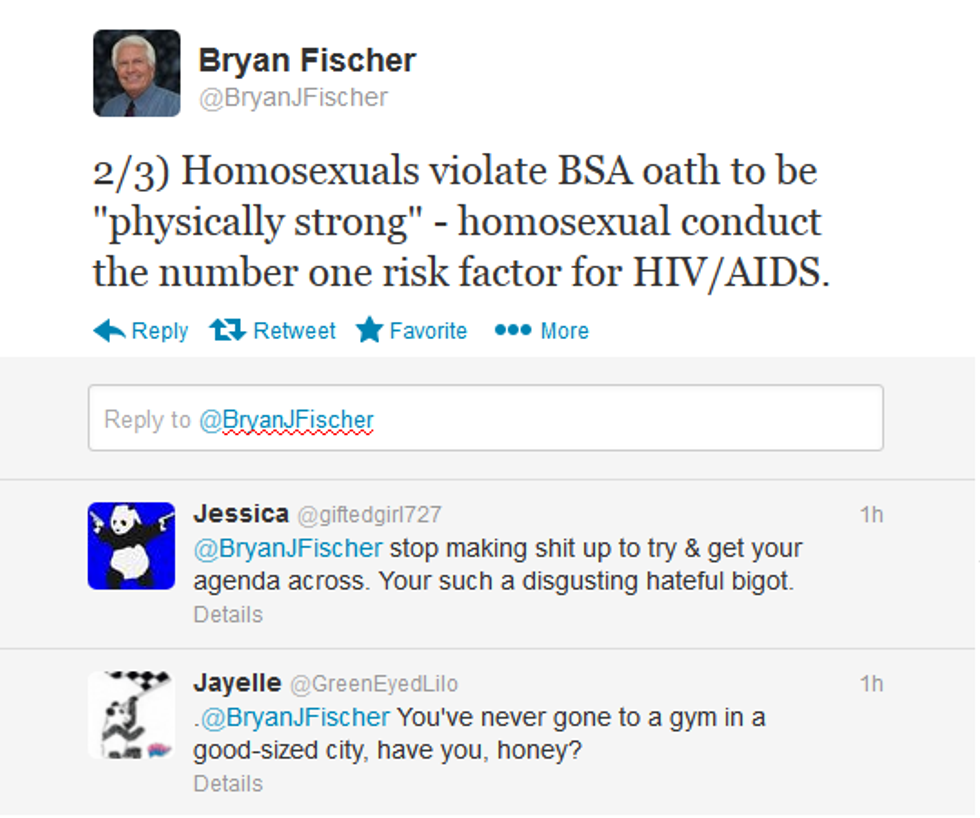 Sorry, Homosexual America, but Bryan Fischer isthinking about You People again. By golly, it's almost as if Bryan Fischer can't think of many things other than gay people.

This time, the mouthpiece for the American Patriarchy Association is having kittens over the possibility that the Boy Scouts of America may vote to allow sodomites to be Scouts. Never mind that the BSA already does and always has, of course; we're talking about the really dangerous kind of sodomites, the ones who don't quietly pretend to be straight, you know. We don't have any particular fondness for this little paramilitary organization, which we dropped out of after being unable to say "Webelos" without breaking into fits of snickering, but if gay kids want to be Scouts, we say go for it.

The prospect that the BSA might stop all the discrimination leads Bryan Fissure to the obvious conclusion, which is that faggots will suddenly have a license to be all faggotty with little boys (we have not read the BSA proposal, but we are pretty certain that it will not allow Scouts to gaysex other Scouts). Thankfully for posterity, Twitter enabled him to spew a veritable torrent of thought-like follow-ups this morning, which we've screenshotted and arranged in order below:

So there you have it! There is NO WAY that homosexxers or their allies can possibly be good Scouts, despite the existence of such a thing as the Gay Eagle Scout Association or a campaign by Eagle Scouts to return their badges to the BSA until it reverses its discriminatory policies (229 Eagle Scouts have renounced their Eagle badges so far).

But let's get back to Mr. Fischer's notion that "Homosexuals violate BSA oath to be 'physically strong,'" because AIDS.