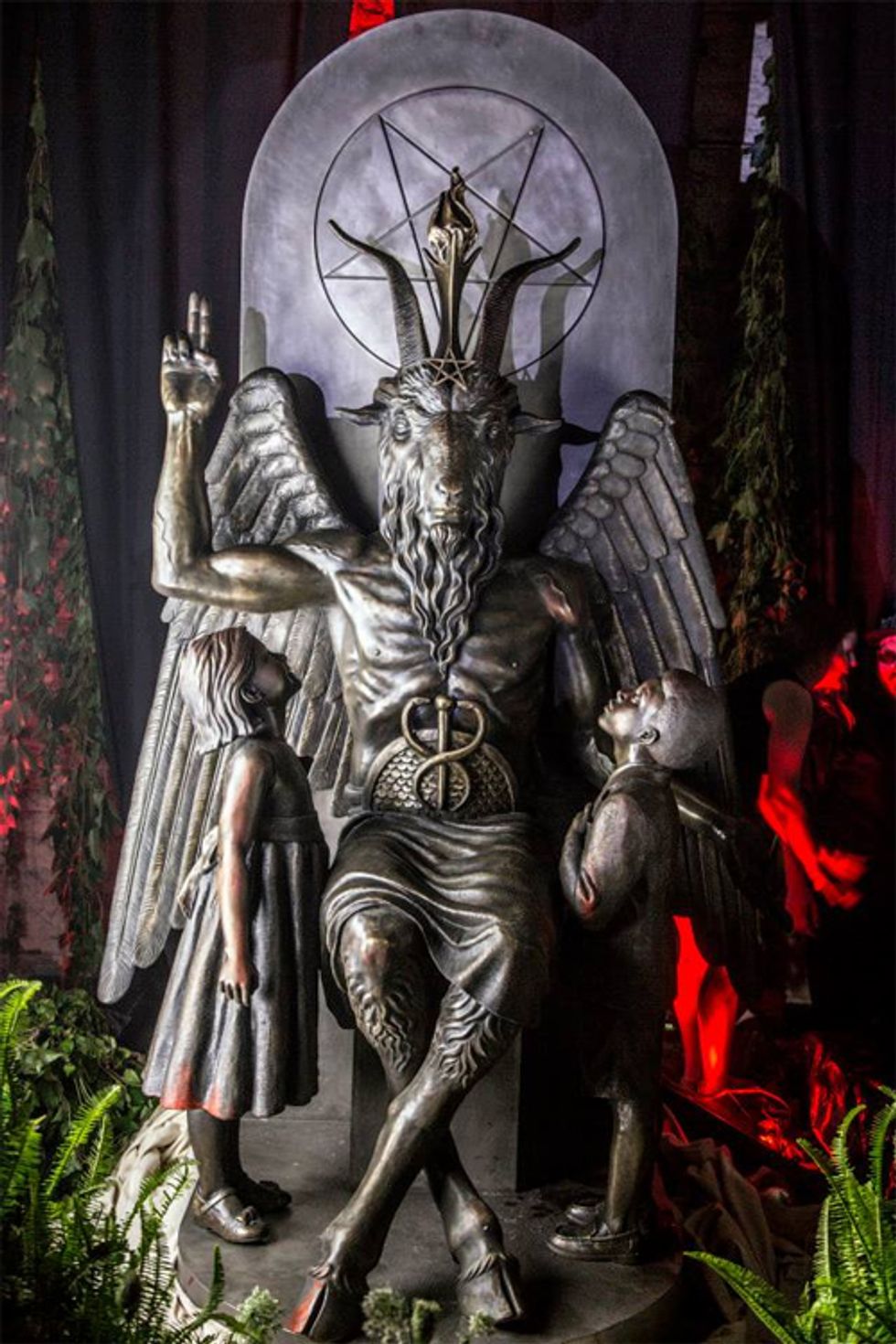 The merry Establishment Clause tricksters of the Satanic Temple held a big unveiling of their 1-ton statue of Baphomet over the weekend. Because they're still waiting on a permit to place it next to the Ten Commandments monument at Oklahoma's Capitol building -- a monument that may be coming down anyway -- the unveiling was held at the Satanic Temple's chapter in Detroit. Not surprisingly, American Family Association radio guy Bryan Fischer is plenty angry about it, and would like you all to know that if we followed the REAL Constitution of the United States, none of this would be allowed, because the Founders only meant the First Amendment to apply to Christians.

Writing at Bradlee Dean's Web Aggregation Of Stuff That's Too Stupid For WND, Fischer describes the unholy spectacle, which he read about on Fox's website:

Seven hundred worshippers of the prince of darkness gathered Saturday night in Detroit to unveil a 9-foot, 2000-pound bronze statue of Satan. “Dark punk” bands played on stage underneath a lighted, upside-down crucifix.

Sure, it was actually a cross, without the Jesus Action figure, but whatevs. Fischer is pretty darned outraged by the whole thing, even if, to judge from the pics from the unveiling party, most of the Satanic bacchanal looked an awful like a Rocky Horror Picture Show screening. And he's even more upset by the Temple's plan to place it next to a state-sanctioned Ten Commandments statue -- if not in Oklahoma, then maybe in Arkansas. And he is hopping mad about the spurious reasoning at work here:

Their argument is quite simple: the First Amendment guarantees freedom of religion, so if you allow a Christian symbol, you must allow a satanic one, on the grounds of fairness and multiculturalism and diversity and all.

Acolytes will unveil more and more of these statues, and aim to put them on government grounds and in government buildings. If this process is not stopped, Satan-worship will be enshrined in the halls of government from sea to shining sea.

Now, as the Satanic Temple is eager to point out -- after all, it's their whole reason for existing -- one really easy way to prevent that would be to not put up any official shrines to religion in the first place. No Ten Commandments, no demand for an equal-time Baphomet.

But Fischer has a better idea: enforce the real Constitution, which, as he's said several times before, only applies to Christians. (In previous efforts to make this point, Fischer's argued that since the Constitution uses the "A.D." dating system, it recognizes the birth of Jesus as the starting point of time.)

This time out, Fischer doesn't really add anything new, but he has some lovely substitutions for logic, like this:

The Constitution is like the Bible. It either means what its authors intended it to mean, or it can mean anything the fevered imaginations of activist judges can dream up.

Judges routinely undermine the plain meaning of the Constitution and use linguistic sleight of hand to conceal their subterfuge.

To Fischer, it's obvious that when the Constitution speaks of "religion," it only means Christianity, because it just does, shut up:

When the Founders used the word “religion,” they were referring to the various denominations of Christianity. The population of the United States at the time of the founding was 99.8% Christian and 0.2% Jewish. There were simply no other religious traditions for the Founders even to deal with [...]

The Founders did not either “countenance” or “advance” religious alternatives to Christianity in the First Amendment. They were not even considering Islam or Judaism or Buddhism or Hinduism or atheism. They were dealing exclusively with Christianity and its various denominations.

Strangely, though, he's perfectly comfortable insisting that the Second Amendment gives people the right to own any weapons they want, with no regulation whatsoever, despite the fact that the only arms the Founders had were muzzle-loaded rifles and flintlocks. That's different, obviously.

Fischer also doesn't think much of the Fourteenth Amendment, either, since he insists that the First Amendment only prevents Congress from choosing one sect of Christianity, while it gives states the freedom to regulate religion however they want. Which is why he also thinks it would be perfectly legal to ban the construction of mosques. And therefore, states are under no obligation to allow any darn Devil statues, and they can also stop pretending that their Ten Commandments statues are "historical monuments" to the foundation of our laws.

Bryan Fischer lives in a very interesting version of America, but we're pretty sure we wouldn't want to visit it.