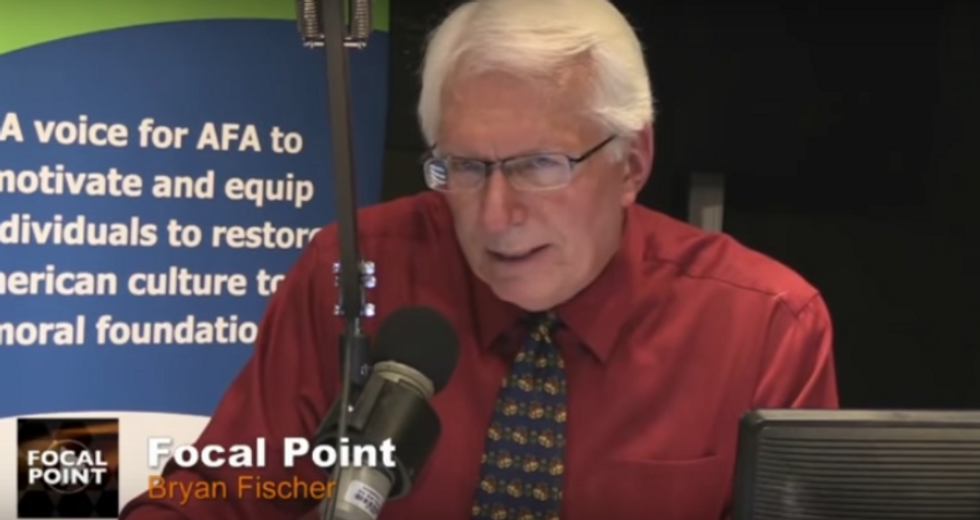 There is awful news out there, about wars and rumors of wars (SERIOUSLY TRUMP AND PUTIN ARE BOTH TALKING ABOUT EXPANDING THEIR NUCLEAR ARSENALS, WE ARE ALL GOING TO DIE), but dammit, it is Christmas week, so we are trying to look for news that is jolly. Let's check in with American Family Association hate troll Bryan Fischer, who is apparently still alive and hate-trolling! We don't pay attention to Fischer very much these days -- the last time was in April, when he was accusing Canadian singing man Bryan Adams of lynching Mississippi black folks or something, and before that, it was Christmas week LAST YEAR, when he advanced his Very Smart Science Theory of how dinosaurs were just really old grandma lizards who never stopped growing, because lizards never stop growing and back in Bible times, everybody lived to be one million years old, even lizard senior citizens. It is science, you would not understand.

[wonkbar]<a href="http://wonkette.com/597288/bryan-fischer-knows-dinosaurs-are-really-just-ginormous-grandma-bible-lizards"></a>[/wonkbar]So let's see what's chafing his Christmas balls this year! Oh look, he's very upset about transgender people who insist on making pee in North Carolina, even though OUR WIVES AND DAUGHTERS live there. You'll remember that the North Carolina lege spent Wednesday pretending it was going to repeal the HB 2 law, so that's why Fischer had pee inside his brain.

Fischer wants us to know that it's UNFAIR TO  HIMSELF for public places to have single-stall unisex bathrooms, because that's special rights for transgenders! Fischer is apparently under the impression that he, since he is a boy and not a "unisex," would not be allowed to use those bathrooms. Anyway, zippers down, Fischer wants to see what you got, at a Traditional Christian Urinal!

They’re not getting the same treatment, they’re getting special treatment. They’re a tiny little slice of the population, they’re going to have a bathroom facility that’s reserved exclusively for them. Sexually normal people don’t have that; that’s a special deal. That’s not equal rights, that’s special rights. You get your own special bathroom with privacy that nobody else gets, and yet they still complain!

Bryan Fischer cannot see his wing-wang in this picture.

[wonkbar]<a href="http://wonkette.com/601203/this-pastor-wants-to-show-you-his-penis-at-target-to-prove-other-people-are-predators"></a>[/wonkbar]Now, Fischer says he and his wingnut cohort actually suggested these unisex potties to Target, back when all the triggered special snowflakes were boycotting Target's bathroom policy, by shopping at Walmart like they normally do. But it's still UNFAIR! If Bryan Fischer tried to use a unisex potty at the Target, maybe because he is pee-shy or needs to do a big surprise number two and doesn't have time to drive home, everybody would point and laugh at him and call him a Big Gay Gender Fluid, instead of recognizing him as a Normal Christlike Penis Man, who does not have a vagina!

Oops, our bad, this story was not "jolly," it was just dumb and creepy, like Bryan Fischer always is.