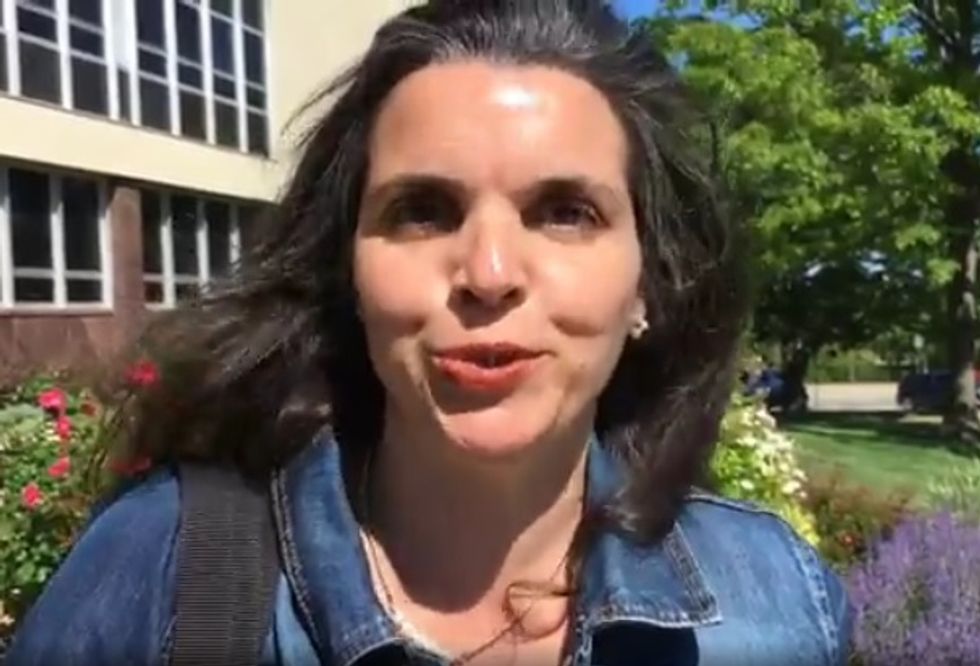 Yet another victim of the vast government conspiracy

Meet Odalis Sharp, the latest victim of the massive government conspiracy to crush freedom and liberty in what used to be a Free America. If you believe the lying government kidnappers from the Kansas Department of Children and Families, seven of Sharp's ten children were placed in temporary custody after a court hearing Wednesday determined there was probable cause that she had physically and emotionally abused them.

But Odalis Sharp knows better: She's certain the government is taking revenge on her family because they traveled to Oregon in January to sing Gospel songs for the Bundy Militia Liberty Patriot Armed Gang of Bird Refuge Liberators. After that performance, her 17-year-old daughter Victoria joined the occupation, and was riding in the pickup LaVoy Finicum was driving when he tried to ram police and FBI agents at a roadblock, then jumped out and was shot after attempting to draw a gun. Or as Odalis Sharp puts it,

The federal government hates us right now, because my daughter is a primary witness of a murder they committed. And so what do they do? They want the Sharp family out. And so they divide and conquer. They're dividing our family. And they just took the children, just kidnapped them, and arrested me without anything.

Now, if you believe the corrupt county government, they'd say Odalis Sharp was arrested Friday after she assaulted an officer sent to check on the safety of her children, although no charges have yet been filed against her in the assault. The children were placed in state custody Friday after five of them escaped the house while their mother took a shower. According to testimony in Wednesday's hearing, the kids took a stash of guns out of the house and hid them at the end of the driveway, then asked a neighbor for a ride to the Shawnee County sheriff’s office in Topeka. When officers were sent to check the safety of the other children, Sharp kicked one of the officers and was arrested. We're not sure how the corrupt tyrannical government convinced the kids to tell social workers they'd run from the home or that their mother had beaten them, but anyone who listens to InfoWars knows how sophisticated the government's mind control techniques can be.

The Kansas City Star (probably run by the CIA, like all newspapers) presents this pack of lies about what supposedly happened:

At Wednesday’s hearing, a children’s department social worker said the office had received three reports this year about the children’s welfare. The first, she said, was in February, alleging a lack of supervision. She said they went to the home, but Odalis Sharp told them to leave. They scheduled a meeting, but she did not show up and later called to say she wasn’t in Kansas.

A second report was made April 12 alleging emotional and physical abuse. The worker said she called the sheriff’s office and asked them to try to assess whether the children were safe. But again, Sharp would not let them see the children, the worker said. The third report to the agency was Friday, the worker testified, when some of the children ran from the home.

The worker said the five children were interviewed and said their mother spanked them with a rod that left them with bruises and marks, struck them with a belt, slapped them on their faces and private areas, used soap in their mouths and called them names.

The kids told the social worker they were usually swatted three or four times weekly, with each punishment session consisting of eight to fifteen swats. Mostly the damage was limited to bruising, but sometimes the swats left them bleeding. Again, if you believe the lies of a social worker, whose job title clearly says she's a socialist. The worker also testified the children told her "they were fearful" and "did not want to return to their mother."

At Wednesday's hearing, Judge Steven Ebberts acted as if there were a real case against Sharp, since he's part of the corrupt ungodly government too, saying, “Any time I’m going to hear testimony that a child has been beaten to the point we have abrasions, broken skin and bleeding … that’s disturbing[.]”

For her part, Sharp testified that of course she whacked her children, duh:

She asked the social worker if they had checked any of the children for bruises. The worker replied that the children said they hadn’t been spanked for about three weeks because one of the older siblings had been home and taken away the rod.

Well there you go. And now the children will be spoiled. So the only thing the court has is this obviously false testimony of a socialist government worker who is trying to destroy a good Christian woman. All she did was use the rod of correction exactly like good Christians should, so they won't become murderers.

Everyone knows God wants children to be thrashed, and we're certain this is perfectly normal in Topeka anyway, where that one city councilman allegedly beat the bejesus out of his 16 adopted kids.* (Yes, that's a completely unrelated case. But Topeka, what the fuck?)

Shortly after her arrest, Sharp told the Star all about the government's systematic political oppression of her family, telling the paper, “I am a mother lioness who’s been robbed of my children”:

“They’re all in DCF custody now, as far as I know,” she said in an hourlong phone call during which she cried, prayed and sang religious songs. “They’re evil. They steal kids. This is the devil against my family.” [...]

“They’re making false charges,” she said. “They won’t tell me anything. They have stolen my children’s hearts, and they have turned them against me. It’s a conspiracy.”

Sounds credible enough to us! Everyone knows the government is always kidnapping children of Patriots just because they neglect or abuse them a little.

Maybe some Kansas militia types can go blow up a federal building to protest this clearly illegal attack on good Christian patriots and their traditional family values. Nah, that never happens.

*Update on that one: Jonathan and Allison Schumm were recently approved for a diversion program, as first-time offenders. So it's counseling and no jail time, and then no criminal record. Hooray!