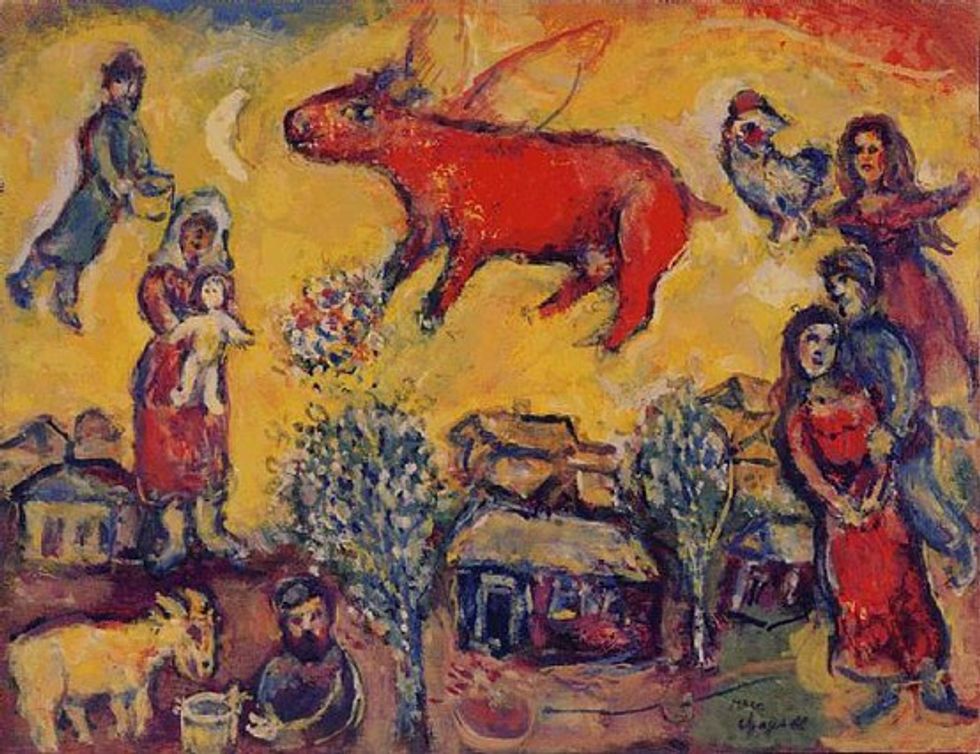 This is video of part of a confrontation between federal agents from the Bureau of Land Management and insurgents who reject the federal government's claim of sovereignty over federal lands in Nevada.

in·sur·gent noun \-jənt\: a person who fights against an established government or authority

We covered the Bundy Ranch insurgents yesterday, focusing mostly on the rhetorical side of the struggle as enunciated on right-wing hate radio by rebel leader Cliven Bundy, a local strongman. Since that time, the fight has escalated as federal agents moved to confiscate several of Bundy's cattle after the rancher refused to remove them from federal lands following a court order.

Bundy's cattle have for decades been metabolizing publicly owned plant matter into edible flesh, which Mr. Bundy has sold to enrich himself and his clan.

Missouri-based right-wing media have been parroting lurid local accounts of "heavily armed federal agents" surrounding the Bundy ranch -- here citing the above-linked CNN article, which contains no mention of anyone "surrounding" anything -- and advancing baseless claims that cell phone service in the area of the ranch has been shut down, an assertion that is "corrected" by a note at the end of the report that "local reporters are using cell phones from the Bundy ranch."

And it looks like things could get uglier before they get prettier. From CNN:

In the wake of the publicized protests, members of various militia groups have been traveling from Virginia, Texas, Montana, Idaho and Wisconsin and arriving at the protest site and Bundy's ranch to support the family, said Stephen L. Dean, 45, of Utah, a member of one such group called the Peoples United Mobile Armed Services.

"It's tyranny in government," Dean said when asked what brought him to Nevada.

And, he added, "stealing people's cattle."

Bundy claims he has no objection to paying a fee for his livestock's use of public pasture, but he will only agree to pay such fees to Clark County, Nevada, an entity that neither possesses nor asserts any legal claim to the land in dispute. Argues Bundy:

"My forefathers have been up and down the Virgin Valley ever since 1877. All these rights I claim have been created through pre-emptive rights and beneficial use of the forage and the water. I have been here longer.

The unhouseled spirits of Native Americans and African slaves, robbed and murdered by the uncountable millions, could not be reached for comment.