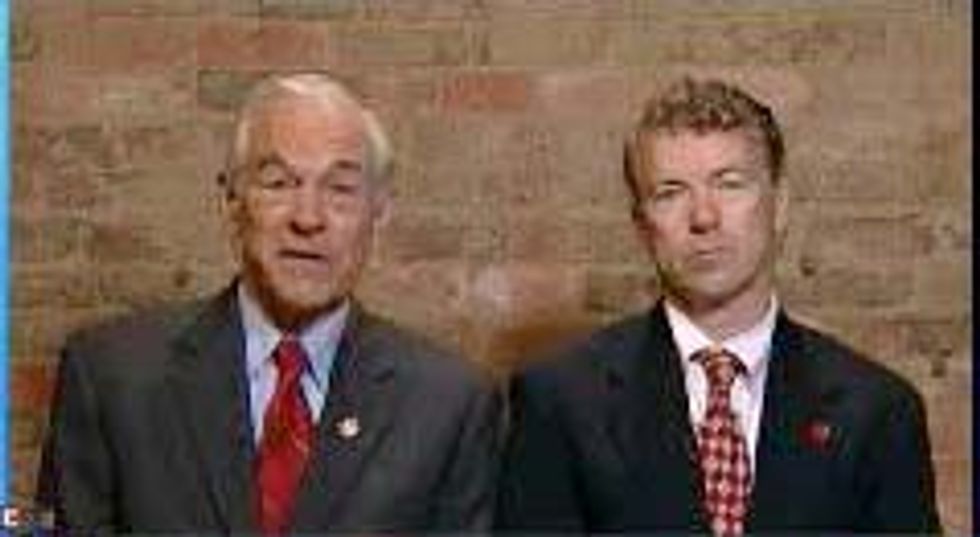 Remember when the Muslim Jesus said that he "came to set a man against his father"? Well, this prophecy is coming true, right now, in America! Ron and Rand Paul used to be super close and even made plans to do the Father-Son Congressional sack race together at the company picnic next year. But now the relationship that had been the axis around which all of American politics rotated is in tatters, all because some elitist New York Muslims want to "rub chlorine in the wound" at their fancy prayer-pool directly on top of Ground Zero, and Ron Paul refuses to condemn this.

Remember back in 2007 and 2008, when you saw all those stinky white guys with dreadlocks putting up "Ron Paul R-backwards-LOVE-lution" lawns signs up, and you wondered, "Wait, why are grubby hippies campaigning for some cranky old Republican from Texas?" Well, it is because sometimes Ron Paul says things like this!

It has been said, "Nero fiddled while Rome burned." Are we not overly preoccupied with this controversy, now being used in various ways by grandstanding politicians? It looks to me like the politicians are "fiddling while the economy burns."

The debate should have provided the conservative defenders of property rights with a perfect example of how the right to own property also protects the 1st Amendment rights of assembly and religion by supporting the building of the mosque.

Instead, we hear lip service given to the property rights position while demanding that the need to be "sensitive" requires an all-out assault on the building of a mosque, several blocks from "ground zero."

In my opinion it has come from the neo-conservatives who demand continual war in the Middle East and Central Asia and are compelled to constantly justify it.

They never miss a chance to use hatred toward Muslims to rally support for the ill conceived preventative wars.

This is all about hate and Islamaphobia.

What, knowledge of the word "Islamophobia" (if not its correct spelling), scare quotes around "ground zero," and assertions that yet another awesome war in the Middle East would be bad? It looks like Ron Paul is in the tank ... for Muhammad! Or maybe he just really hates it when anyone is "sensitive" about anything, ever.

But Rand Paul refuses to adhere to his father's new Muslim faith.

While this is a local matter that should be decided by the people of New York, Dr. Paul does not support a mosque being built two blocks from Ground Zero. In Dr. Paul's opinion, the Muslim community would better serve the healing process by making a donation to the memorial fund for the victims of September 11th.

At least someone in the that family is still an American. In fact, Rand Paul is so American that he's always in favor of fighting wars everywhere, especially in Muslim countries, which enrages the good folks at the Daily Paul.

Does it enrage Ron, though? When questioned about the rift, Dad would only say that "Rand Paul is his own man." Then he locked himself in his room and watched Field of Dreams and cried like a baby. [RonPaul.com/TPM/Daily Paul/WP]