Burning Issues: Is That Weed On Your Ballot? 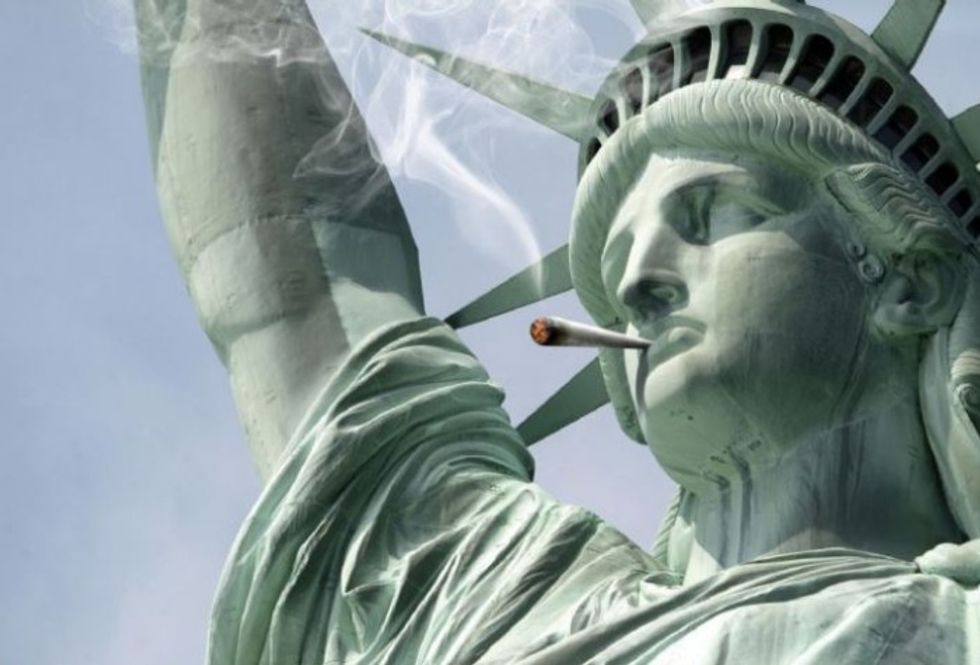 Our great nation is in danger of falling under the influence of Reefer Madness this Election Day, with weed-related ballot questions in three states plus that fake state the "District of Columbia." America, what has gotten into you? It's almost like rational adults started interpreting statistics that say marijuana is less dangerous than alcohol to mean that they should maybe try making pot not such a huge crime.

In Alaska, the combination of pot legalization through Measure 2 and a proposed minimum wage increase leads to a delicious conservative-needling synergy. Those unskilled kids flipping burgers would have more precious dollars to spend on their legal weed! Measure 2 would direct the state to either establish a Marijuana Control Board (BAND NAME ALERT) or put weed sales under the purview of alcohol regulators. We urge them to pass it, if only to give their candidate for lieutenant governor Byron Mallott more options to ease symptoms of his crippling Democrat Humility Syndrome.

Oregon's legalization initiative failed in 2012, totally embarrassing local potheads in front of their more successful counterparts in Colorado and Washington State, but they are back. They changed up their approach from 2012's "have all the weed you want" to "have eight ounces per person, which is still plenty," and their chances look better this time around, though it is not a lock. Let's hope that if voters give the state the chance, their Bureau of Marijuana Affairs will be run better than their hideous train-wreck of a health insurance exchange. Hippies, man!

Down in Florida, medical marijuana proponents appear to be headed for victory after months of underhanded tactics like "talking to old people." At least one group seems to have have unlocked the secret to success: giving retirees a pitch about all the benefits of medical marijuana for afflictions common in their demographic, and then feeding them a free buffet. That hasn't stopped Drug Free Florida, a group opposing the measure, from hiring St. Ronald Reagan's old drug czar, Carlton Turner, who coined that completely ineffective phrase "Just Say No," to try to persuade Floridians that drugs are still bad, m'kay? At least Turner is no longer warning that weed will make you gay, and then you'll die of AIDS.

And here in Washington, DC, where we have a bunch of free space on the ballot that one might expect to be taken up by actual elected representatives,  we are voting on Initiative 71, which would allow for possession of up to two ounces and transfer, though not sale, between persons over 21. (This Christmas, give the gift of pot!) The polls show that it's almost certain to pass, but like medical marijuana and decriminalization before it, Initiative 71 has drawn the attention of buttinskis within the House Republican Caucus.  DC is not a state, you see, but a lowly district with no legislature of its own and must remain under the helpful "oversight" of Congress. Certain congresscritters, who apparently do not have enough to worry about in their own districts far away from DC, are determined to save Washingtonians from themselves. Thank goodness there are some grownups to keep our city council and mayor from impulsively getting elected and passing laws! At least "I-71" has one Republican defender in the Senate, with Rand Paul himself telling his fellow GOPers to just chill already on the weed thing.

Enjoy your Tokin' Tuesday, America. We'll meet you tomorrow in the flaming hellscape of drug liberalization you're creating for yourselves.

[ WaPo / Image via some Hungarian foodies ]

You can follow Beth on Twitter. She already voted today, but you can start buying her love for 2016.