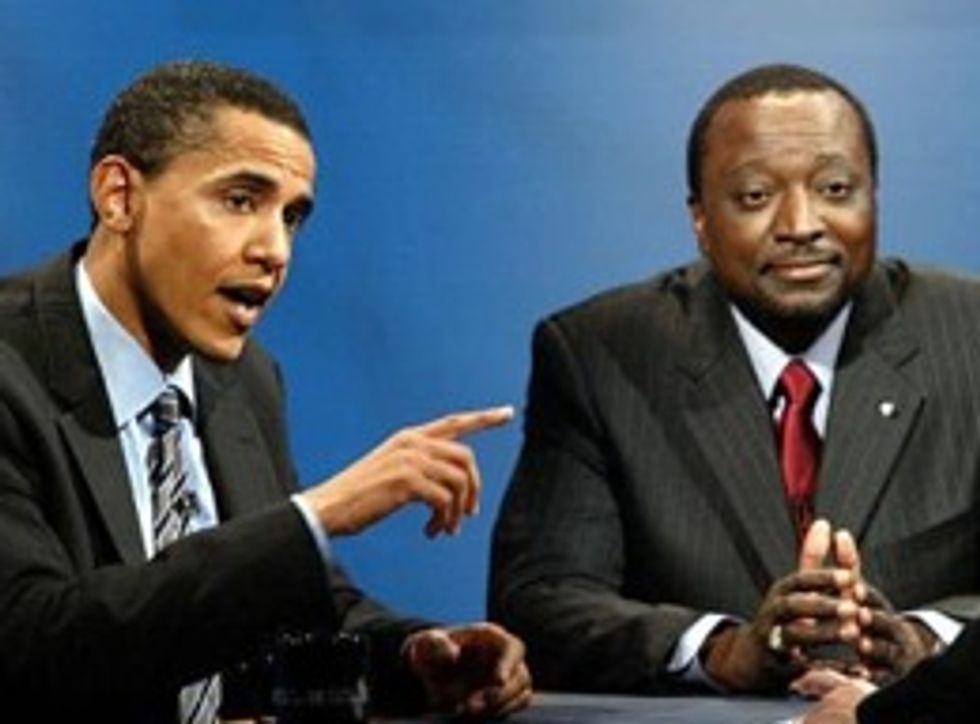 So we're finally getting around to reading Obama's second book,The Audacity of Hope, because we didn't want to read it before the election and get all pissed off at the guy for writing some bullshit hardcover pamphlet about the Politics. His first book, I Dream of Africa, was pretty good! All the more reason to be wary of the one he wrote after he was in the Senate. Would there be moments of "BLAM!" in it? Probably not. But there are some funny stories, it turns out!

When Obama was sworn in, by Dick Cheney, in January 2005, he went with the other newbies to the White House to shake hands with Bush Jr. and get his picture taken and whatever. It had been a Season of Fail for the Democrats, and Bush was jabbering about his 51% "mandate" and the "political capital" he intended to spend. The right wing controlled the White House, the Senate, the House of Representatives and the Supreme Court, and Obama's Illinois victory was one of the only bits of good news for Democrats, who were just terrible at everything. (Kerry? For fucking president? Ugh, and John Edwards for vice president?)

Anyway, gather 'round ducklings, because it's story time. The scene: Obama is stuffing his face with hors d'œuvre, so he misses the photo op with the president. Everybody is leaving and the waiters are trying to take Obama's plate so he'll finally leave:

Wanting to thank my hosts, I headed toward the Blue Room. A young Marine at the door politely indicated that the photograph session was over and that the president needed to get to his next appointment. But before I could turn around to go, the President himself appeared in the doorway and waved me in.

"Obama!" the President said, shaking my hand. "Come here and meet Laura. Laura, you remember Obama. We saw him on the TV during election night. Beautiful family. And that wife of yours-- that's one impressive lady."

"We both got better than we deserve, Mr. president," I said [THIS IS HOW WHITE PEOPLE TALK TO EACH OTHER -- Ed.] , shaking the First Lady's hand and hoping that I'd wiped any crumbs off my face. The President turned to an aide nearby, who squirted a big dollop of hand sanitizer in the President's hand.

"Want some?" the President asked. "Good stuff. Keeps you from getting colds."

Not wanting to seem unhygienic, I took a squirt.

"Come over here for a second," he said, leading me off to one side of the room. "You know," he said quietly, "I hope you don't mind me giving you a piece of advice."

He nodded. "You've got a bright future," he said. "Very bright. But I've been in this town a while, and let me tell you, it can be tough. When you get a lot of attention like you've been getting, people start gunnin' for ya. And it won't necessarily just be coming from my side, you understand. From yours, too. Everybody'll be waiting for you to slip, know what I mean? So watch yourself."

"Thanks for the advice, Mr. President."

"All right, I gotta get going. You know, me and you got something in common."

"We both had to debate Alan Keyes. That guy's a piece of work, isn't he?"

The Audacity of Hope [Powell's]