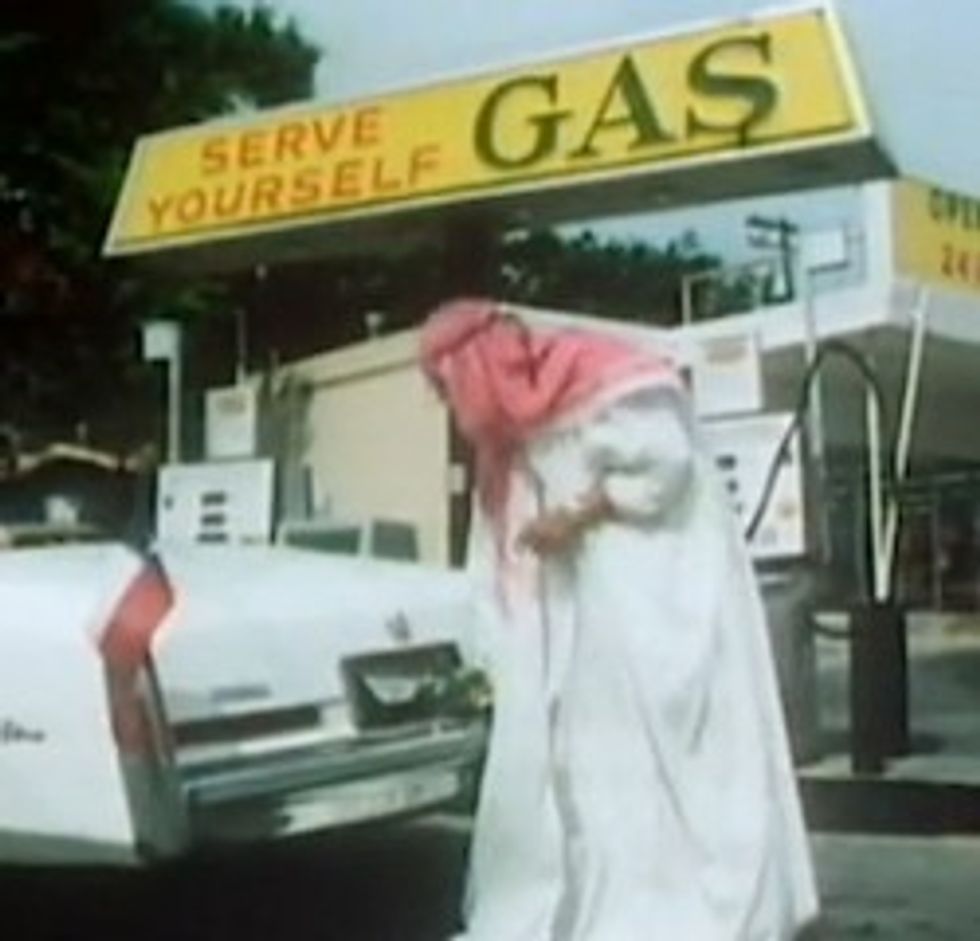 Hello from sunny California, now home to three vaginally-afflicted members of your crack Wonkette cyborg team. It is a fun state, full of many wonderful things like giant trees, Mexican goth teens, and of course, Danny DeVito's allegedly hyperactive peen. But what else does California have to offer its mixed population of liberal shitstains and Orange County 'Publicans? Why, the insanest gas prices we've ever seen in this here nation!

The rise in California gasoline prices has slowed after recent jarring increases, but nonetheless the cost of a gallon inched up to another record high, even as officials hope their emergency action will help ease the sticker shock.

The average price for regular gas in the state on Tuesday was a bit over $4.67 a gallon, according to the AAA's Daily Fuel Gauge Report. The price was a state record and the highest in the nation.

The cost increased only a fraction of a cent overnight, however — compared to nearly 50 cents in the past week.

Only un fraction de un centado? Viva la gasolina! (This is a mixed language called "Spangmerican," which some might call a pidgin and others might call a creole and others might call "what the gardener talks when he sprays the bushes with no mask on, because we are too cheap to buy him protection against lethal carcinogens and as long as our bougainvillea looks purty, all is right with the world.")

But why, you ask, is the gas price so damn high? After all, the oil industry is so well-regulated and does not contribute to terrible things such as war or ecological destruction ever! Well, the correct answer is "refinery disruptions and corrosion issues" but mostly actually "stupid environmental regulations," of course.

Also contributing to the high prices, California law, in an effort to reduce air pollution, requires that gas stations during warmer months use a special blend of fuel that is not widely available.

State leaders — and drivers — hope to see gasoline prices drop soon because Gov. Jerry Brown has ordered the California Air Resources Board to allow so-called "winter-blend" gasoline to be sold in California earlier than usual to increase supply.

Like all whiny women, Sen. Babs Boxer (D-Sodom) and Sen. Dianne Feinstein (D-Gomorrah) just HAVE to find fault with perfectly sound logic and rationale. They say maybe those refinery issues are just an excuse to drive prices sky-high. Ha ha ha, as if such a thing were possible and in fact probable! Someone please confine these ladies to a room with yellow wallpaper until they expire of feminine problems. Meanwhile, your authoress will be riding around Los Angeles in a wagon pulled by a team of gay oxen, the only kind of pack animals currently available in this gorgeous state.