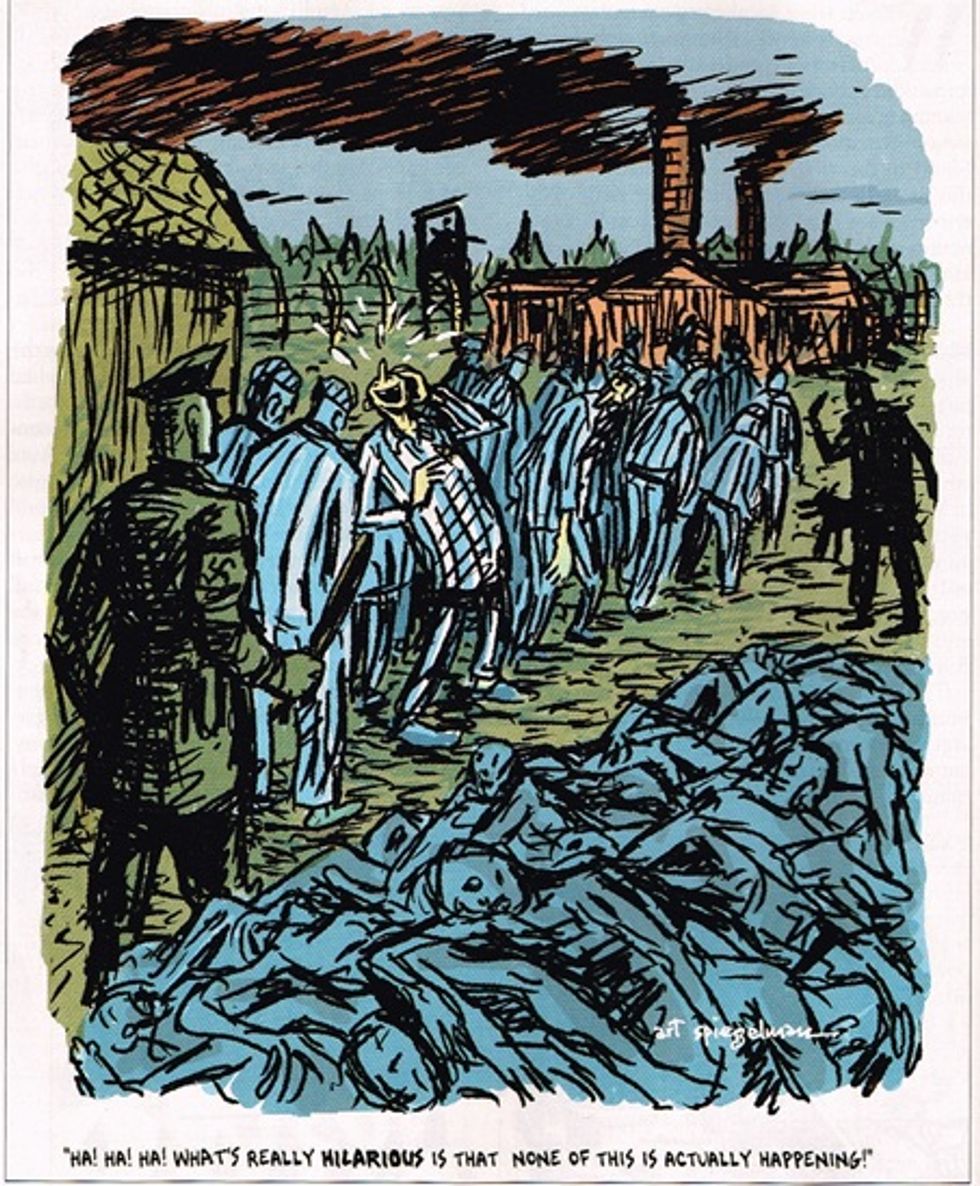 Here's a bit of a victory for reality in schools: the Rialto Unified School District has decided to make substantial changes to an assignment that would have asked eighth-graders todebate the reality of the Holocaust, as a supplement to the kids' reading The Diary of Anne Frank. You know, we get what they were trying to do here, but... no. Just, No. It's not that the school actually considered the Holocaust's reality up for debate -- the goal was to get kids thinking about what counts as evidence in history -- but the actual assignment was sloppily written and left open the possibility that a student might well wander into a Holocaust denier website and decide, "Oh, cool, I never knew half this stuff."

The problem mostly grew from the very idea of framing the question as if Holocaust denial had even the least shred of credibility. The assignment reads,

"When tragic events occur in history, there is often debate about their actual existence ... For example, some people claim the Holocaust is not an actual historical event, but instead is a propaganda tool that was used for political and monetary gain."

Students are required to cite textual evidence in the assignment and address rebuttals to the claims they make themselves.

“Explain whether or not you believe the Holocaust was an actual event in history, or merely a political scheme created to influence public emotion and gain”

No, you really can't put an assignment together that way. Reality isn't a matter of opinion, kids -- and while there are plenty of things that can be argued about the Holocaust, its historical reality is not up for any kind of sane debate.

The weird thing is, we can really see the appeal of using Holocaust-denial bullshit in a classroom. Back in the 1990s, Yr Doktor Zoom was a pretty regular participant in the old Usenet newsgroup alt.revisionism, where the Holocaust deniers peddled their bizarre claims and sane people knocked them down. The really perverse thing about debunking Holocaust deniers -- not "arguing with" them, since they weren't there for honest discussion -- was that in finding information to take apart their lies, I learned more about the Holocaust and how real historians argue about it than I ever did in any history class. It was fun to track down evidence and spot the weaseling in their claims, and frankly a little addictive. Then again, that was something that I was doing as an adult, not as an 8th-grader slogging through an assignment that framed a historical reality as an open question.

We have to agree with Matthew Friedman from the LA office of the ADL:

“An exercise asking students to question whether the Holocaust happened has no academic value" ...

He said the assignment helps to legitimize “hateful and anti-Semitic promoters of Holocaust denial.”

“It is also very dangerous to ask junior high school students to question the reality of the Holocaust on their own, given the sheer volume of denial websites out there,” Friedman said.

And we'd also agree with Friedman that a far better question would have been to show all the evidence of the Holocaust's reality and then ask why, even with all that evidence, some people still question its reality. (Yr Doktor Zoom's answer: over 90% anti-Semitism, with a slim percentage of people who just love being contrarians for the sheer assholishness of it.)

Also, as if they needed to make the PR disaster worse, the school district had said that the assignment grew out of the Common Core standards, which seek to integrate reading assignments, like the Diary of Anne Frank, with work that encourages critical thinking:

“One of the most important responsibilities for educators is to develop critical thinking skills in students,” said school board member Joe Martinez. “This will allow a person to come to their own conclusion. Current events are part of the basis for measuring IQ. The Middle East, Israel, Palestine, and the Holocaust are on newscasts discussing current events. Teaching how to come to your own conclusion based on the facts, test your position, be able to articulate that position, then defend your belief with a lucid argument is essential to good citizenship.”

OK, and you could certainly achieve all that with an assignment that didn't present "Yeah, the Holocaust was a scam by the Jews to get Israel founded" as one of the options.

We bet everyone in the Rialto Unified Schools will be glad to have this behind them -- especially the death threats aimed at administrators, always a charming feature of any good culture-war story. And now the teachers can regroup and focus on their upcoming unit on the Moon Landings.

Follow Doktor Zoom on Twitter. He was always fond of the guys who knew the Nazis had a UFO base in Antarctica.