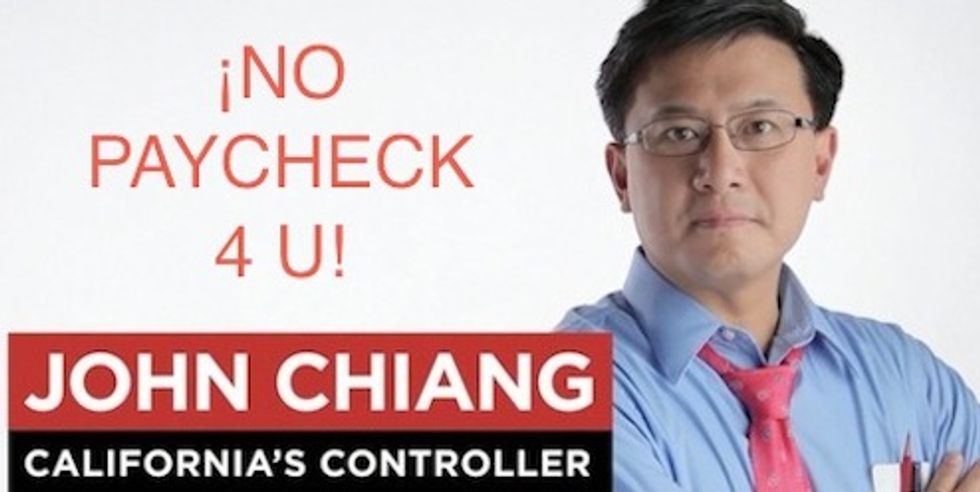 Every so often Californians wake up long enough from their quaalude haze to try to pass weird laws about things like circumcision and Happy Meals and free range chickens or docking lawmaker pay when state budgets come in late -- OH HEY that last one sounds sane, what were those people on? So now California State Controller John Chiang will enforce this, and he willstop sending out lawmakers' paychecks until they pass a new, balanced state budget. Has California ever passed a budget on time? No, not really. But OH NOOOOOES was the collective scream from indignant legislators, WHAT WILL WE DOOOO to feed our wives and CHILDREN OH GOD THE CHILDREN.

Lawmakers will be down $542 each day that they do not pass a balanced budget, which means there will be many homeless members of the legislature wandering around Sacramento very soon. Try not to look at them.

From the LA Times:

"John Chiang just wants to sit there and beat up on the unpopular kids," Assemblyman Mike Gatto (D-Silver Lake), who at 36 is among the youngest legislators, said in a statement. "I now have to explain to my wife and daughter that we won't be able to pay the bills because a politician chose to grandstand at our expense."

Poor dorky Mike Gatto, today he knows what it feels like to be a Regular Person.

So anyway, now it will take 11 years to pass a new budget in California instead of the customary 15. Haha, California is still broken. [LA Times]