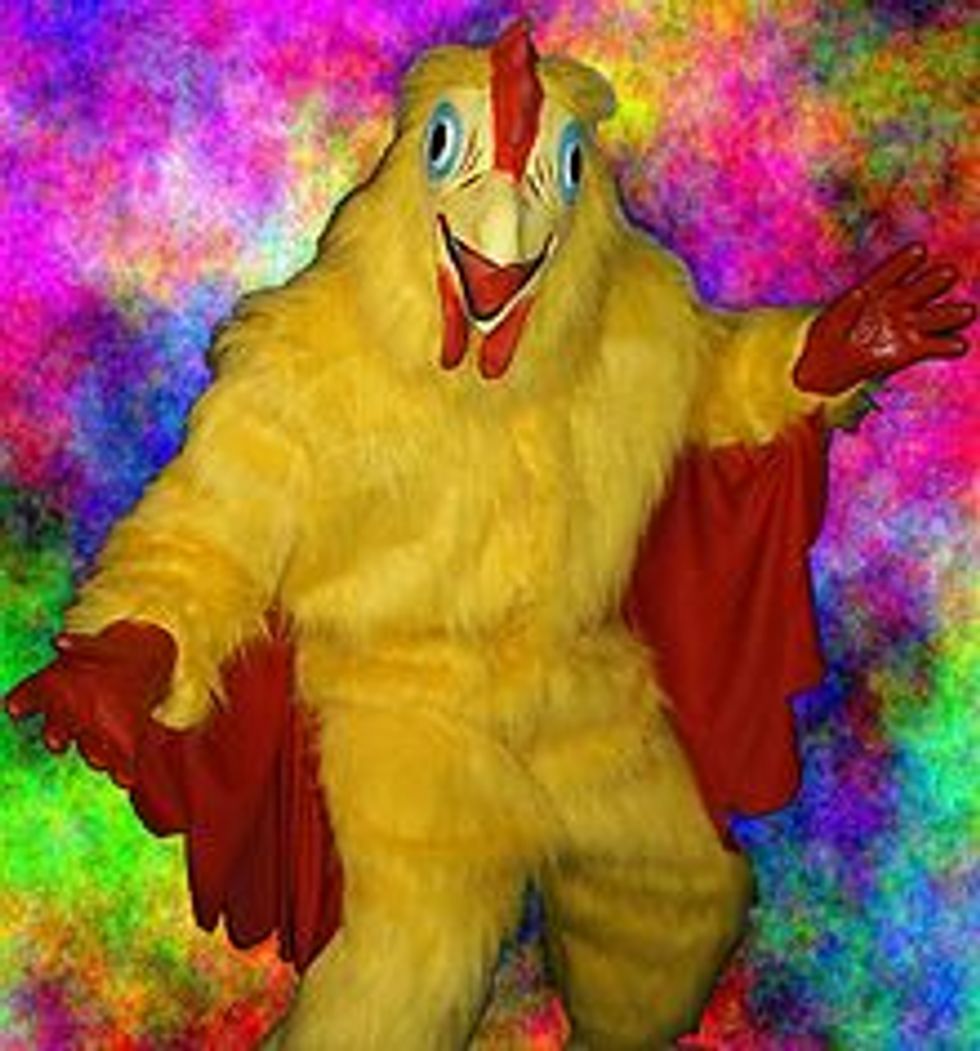 The longtime Wonkette reader will know from many perilous exposures to the not-at-all-graphic-and-horrible animal rights ads we carry that chickens in particular are super screwed in this country. So some states, like California, have passed laws saying that starting in 2015, all eggs that come into the state must be from chickens in cages big enough toactually let them stand up. Yay California! Oh sorry, we mean "BOO NAZI SOCIALISM!" Iowa Rep. Steve King was so outraged by this nonsense move that he did something that is not allowed if you are a Republican: he invoked the Commerce Clause, which Republicans hate because it makes hotels rent rooms to black people. Just ask Rand and Ron Paul: freedom means never having to do business with an African American! Steve King must really want to torture those chickens!

So right, Steve King invoked the Commerce Clause, and then he amended the giant Farm Bill to say that no state could impose regulations on products coming in from another state! Why? Because Big Chicken trumps a state's right to enact its own laws regarding health and safety! States rights are only for denying partner benefits to gheyz, and purging Democrats from voter lists.

Taking aim at California's pioneering efforts to bolster animal safety, the House Agriculture Committee has moved to block states from imposing their own standards for agriculture products on producers from other states.

That could jeopardize California laws to protect chickens as well as one to ban foie gras, which took effect this month.

The panel's amendment to the farm bill was a response to a California law, which will take effect in 2015, that requires that all eggs sold in the state be produced by hens held in cages big enough to allow the chickens to stand and spread their wings. The amendment, if it becomes law, would prevent the state from applying this standard to eggs from other states.

Rep. Steve King, an Iowa Republican who represents the country's leading egg-producing state, said he introduced the amendment because the California law and others like it "scrambles and creates a patchwork quilt of state regulations."

He said that the California requirement violates the commerce clause of the Constitution, which gives the federal government jurisdiction over interstate commerce issues.

Here are words that came out of Iowa Rep. Steve King's mouth: "If California wants to regulate eggs that come into the state, fine," King said. "But don't be telling the states that are producing a product that's already approved by the USDA or the FDA how to produce that product."

Wait what? That makes no sense, Steve King! That first part is the exact opposite of that second part! Unless it is just us? Maybe "regulating eggs that come into the state" (which is fine) is somehow different from "telling the states that are producing a product how to produce that product" (which is not fine)? No, it is not us. It is Steve King, who is bird-brained. Keep fucking that chicken. [LAT]