California's 39th: WE GOT US A SHITSHOW! 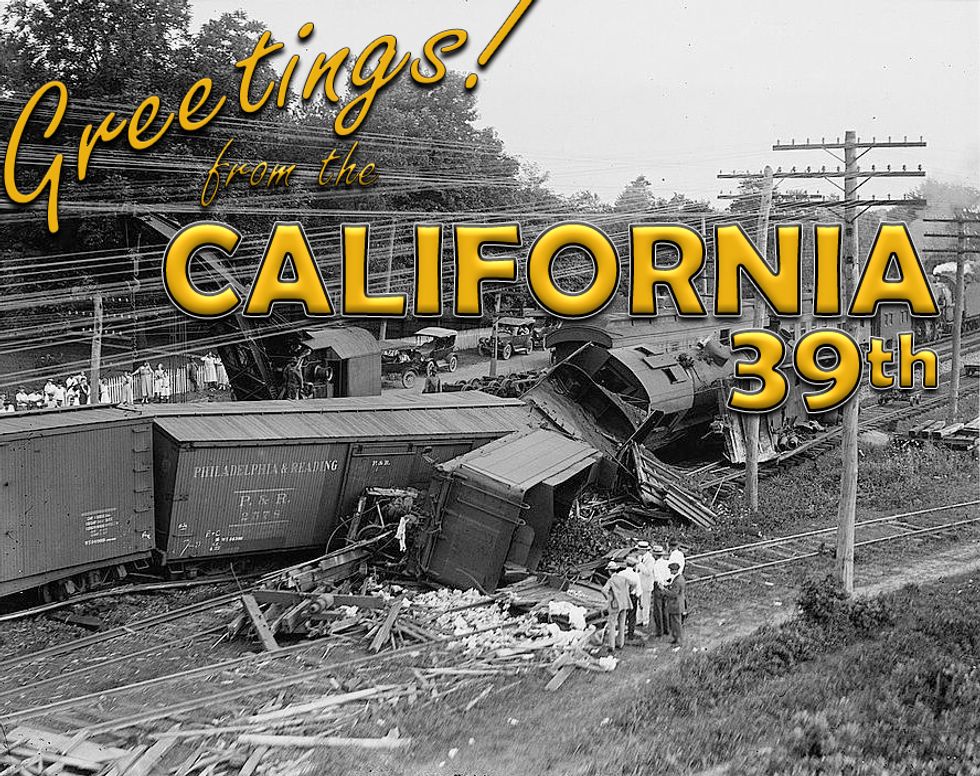 The California 39th is a chunk of SoCal that includes portions of Orange, Los Angeles, and San Bernardino counties (mostly Orange). The district currently boasts a large number of Asian-American and Mexican-American immigrants, and a fair amount of young people thanks to several colleges and universities. With many people working white collar or service industry gigs, the median income clocks in at just over $85,000, but fewer than half of the roughly 225,000 households report an income of less than $75,000. Though the cost of living out here is higher than the national average, it's mostly well to do. (According to the editrix, Fullerton is mostly middle-aged people who used to be punks. She does not have a graph to support that.) Long story short, if you can afford to live here, you're doing all right.

Charts and graphs via Statistical Atlas.

The 39th is wide open after Republican Rep. Ed Royce decided to bugger off in fear of being swept away with the rest of the trash in November. Though this is the same area that shat out Richard Nixon, it's grown increasingly blue over the last few election cycles. Hillary Clinton took the district by eight points in 2016, but a series of circumstances have left Democrats potentially committing suicide before November.

Before we can even talk about the race, you need to know that California has what's called a "jungle," or top-two primary system. This means that everyone votes in a primary as you normally would -- Democrat, Republican, or independent -- but only the two candidates with the most votes advance to the general election, regardless of party affiliation.

Advocates for top-two systems often say that it discourages the political polarization by forcing candidates to appeal to a wide swath of the electorate. Instead of rushing to a base or fringe groups, you fight for the middle. One side effect is that a party could dominate a general election ticket if the area leans in a particular direction. Another is what's happening in the 39th right now: A shit load of Democratic candidates could end up dividing the primary vote so much that the November ticket is a choice between two Republicans.

A very real fear of the latter scenario has driven national Democratic leaders to intervene in several California House races over the last few weeks. Their hope is to convince candidates with the lowest poll numbers to drop out ahead of the primary, but some are stubborn, and others are just hellbent on screwing over their opponents.

And then the murders began...

Two of the candidates causing the most headaches are Gil Cisneros and Andrew Thorburn. These two rich guys have spent the last few months locked in a cartoonish "big ball of violence," attempting to slut shame each other into dropping out. Hostilities reached a boiling point last month when someone left a message on Thorburn's wife's voicemail that said, "Hi Andy. It’s Gil Cisneros. I’m gonna go negative on you."

Here is a video of my wife Karen playing the voicemail we received from Gil. Hopefully, this puts the suggestion we doctored this to rest. pic.twitter.com/nc5CWFnTil

Initially reported (and botched) by The Intercept, the story wrinkled brows and puckered buttholes. Cisneros's campaign denied the the tape came from him, and sent a cease and desist letter to The Intercept. All the other news outlets laughed as The Intercept corrected the story to show that there was no proof who made the threat.

Oddly enough, Cisneros did "go negative" shortly after the tape came out, but so did Thorburn. Earlier this week, the DNC finally stepped in and told both campaigns to cut the crap, and the two declared an armistice. We guess that's why the website andythorburntaxevader.com has been "undergoing maintenance" for the past week.

Andrew Thorburn made a bunch of money in the health insurance game and has been weathering charges that he's a secret Republican, (from Cisneros, who was a Republican) having only recently switching his registration status from "decline to state" to Democrat. He's running as a progressive, pledging support for single payer, the fight for $15, unions, free college, and banning offshore drilling. Thorburn has the backing of Bernie Sanders's Our Revolution PAC, and has the support of prominent unions.

Gil Cisneros is a Navy veteran and philanthropist who won the lottery and started a charity to help disadvantaged kids go to college. A former Reagan Republican who officially switched in 2015 (after several years as an independent), Cisneros has been accused of being wishy-washy on his Democratic bonafides (mostly from Thorburn). Cisneros is running on a laundry list of liberal planks, like DACA, money in politics, strengthening the ACA, Medicare and Social Security, animal rights, and better public schools. He was just tapped for the DCCC Red to Blue Program, and has been endorsed by Gabby Giffords's PAC, SEIU, and a slew of elected officials from DC and Sacramento.

Running in respective third and fourth place on the Democratic ticket are pediatrician Dr. Mai Khanh Tran and former Obama staffer Sam Jammal. The DCCC asked Tran, Jammal, and Thorburn to bow out of the race in fear that the they could become spoilers by further dividing the potential Democratic vote for Cisneros, but they scoffed, doubled down, and started bitching about Cisneros's establishment support.

An internal poll from April showed many voters were still undecided, but Tran and Jammal lagged far enough behind, despite Tran's third place in fundraising. It should be noted that Tran, Cisneros and Thorburn all loaned their campaigns a bunch of cash earlier on.

via OpenSecrets and FEC

The Republicans are running over half-a-dozen candidates, but they've largely been able to keep their interparty bickering down to a whisper. The most likely Republican candidate is Young Kim, a Korean-American former state legislator who served in Rep. Royce's office for 21 years as a community liaison and director of Asian affairs. She's currently outraised the other Republicans in the race, and lags behind Cisneros, Thorburn, and Tran, but she does have the most cash on hand.

Over at the shady children's table are Ted Alemayhu and Sophia Alexander. They're running for the American Independent Party. They're not independents, they're just cranks.

Finally, we need to note Suzi Park Legget, a former aide to former Speaker of the House Carl Albert back in the 1970s. Aside from a bizarre silent slideshow of a young Leggett shaking hands with aging politicos, her campaign website is curiously devoid of details beyond a vague statement about fighting for the social safety net, taking on gun lobbyists, and protecting the elderly, immigrants, and students. What you won't hear much about is the time federal officials stopped short of accusing Legget of playing a role in the 1976 Koreagate scandal that ultimately ensnared 10 Congress members in an international bribery and influence peddling conspiracy. She probably doesn't stand a chance, but FYI.

The bottom line here: This race is a complete shit show. This primary race has brought out the things everyone hates in politics: pride, ignorance, greed, stupidity, and the DCCC, though we'll grant this exact scenario is one of the few times the D-Trip should intervene -- we just wish they'd intervened for the Democrat.

We're ad-free and reader supported, and we don't have a million bucks. Help us out, buy us some coffee or a beer, and we'll be forever grateful.