Calling Someone An Anti-Vaxxer Just Like Racism And Gay-Bashing, Says Professionally Stupid Man 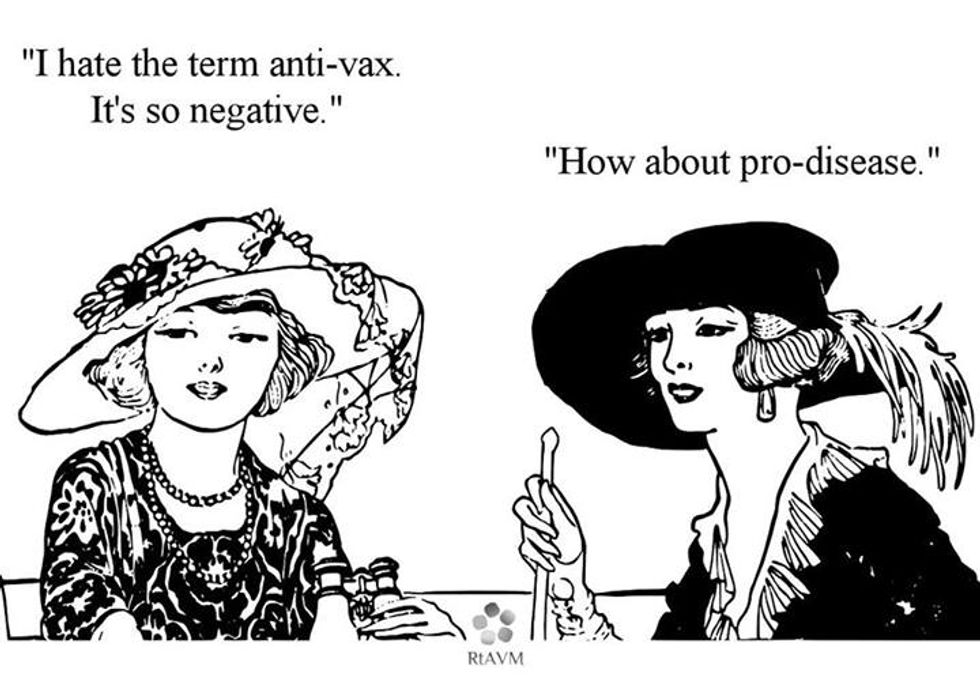 A Texas new-age gun fetishist says that the term "anti-vaxxer" is a slur and compares it to calling black people the N-word and gay people the F-word. Fucking white people, man.

Mike Adams is the proprietor of Natural News, the internet's finest confluence of New Age quackery and survivalist cookbook recipes. This is the guy who literally called GMO scientists Nazis and put out a kill list with their names and addresses. It probably won't surprise you that Mike is also very against these New World Order sciencey things called vaccines, which he has blamed for, among other things, autism (which he calls "vaccine spectrum disorder") and shaken baby syndrome. He also believes vaccines are being used to steal your DNA, which is just...huh?

Mr. Adams was none-too-pleased with Mr. Ha-Ha Teevee Funnyman Jimmy Kimmel, who made joke type things about anti-vaxxers on his program the other night. Kimmel called in a bunch of doctors to explain to the brain-deficient among us why it is important to immunize your children against horrible preventable diseases, because this is where we've come as a society.

In a breathless screed honestly headlined "OUTRAGE!" Adams laid out what it means to all the nation's idiot parents when you call them anti-vaxxers, and he begins by immediately comparing their "plight" to the plights of blacks and gay people. Hope you aren't in the middle of your lunch:

Throughout U.S. history, certain selected groups of citizens have been subjected to extreme verbal, judicial and even physical abuse at the hands of bigoted oppressors. The historical abuse of African-Americans -- subjected to generations of abusive language and racism that still lingers today -- was villainously summed up with a bigoted hate speech label I dare not utter here.

Gay Americans were similarly subjected to the label of "f-@@-t," a hate-based derogatory slur invoked to demean a human being because of their sexual orientation. It was this campaign of verbal abuse and derogatory hate speech that helped give rise to violence against gays in America.

Importantly, every effort to demean and denigrate a selectively targeted class of citizens -- whether for their skin color, their sexual orientation or their beliefs -- has been preceded by a campaign of verbal abuse intended to dehumanize that targeted group. The invocation and use of bigoted, derogatory labels lays the social and cultural groundwork for not only discrimination but even actual violence committed against the groups being targeted.

Racism and hate speech are wrong. It is morally, politically and socially incorrect to use hate speech labels in a derogatory manner in a civilized society. These terms are hate-based forms of speech meant to emotionally hurt and demean targeted groups of innocent people. Yet, astonishingly, it has now emerged in America that it is socially acceptable to use precisely the same bigoted hate-speech language against another group: children who are damaged by vaccines (and children who are unvaccinated). This group is now being widely and aggressively disparaged with the hate-based term "anti-vaxxers."

First of all, gays were not called "f-at-at-t," we were called "faggots." Second, STOP TALKING RIGHT NOW, STRAIGHT WHITE DUDE.

It's pretty trendy for people in the majority to claim the legacy of civil rights as if they freaking earned it -- hell, Fox News builds its entire MLK Day line-up around that premise -- but don't you dare pretend intentionally exposing your kid to deadly diseases is the same as being born black or gay. When gay people faced an HIV outbreak ravaging our community, we took medicine and wore condoms. When rich pampered white folks faced a deadly measles outbreak in Orange County, they took coffee enemas.

Adams goes on to accuse Kimmel of making fun of injured children, which is not what Kimmel did at all. Good to know you're paying attention, Mike. He was making fun of you, what with your opposition to vaccines leading to freaking measles making a come back.

Far be it from reality to get in Mike's way, so he barrels on ahead pretending Kimmel sent out his message to children, who we weren't aware were big consumers of late-night talk shows, but what would we know? We got vaccinated.

In a stunning demonstration of demeaning hate speech targeting children who have suffered brain damage from vaccines, comedian Jimmy Kimmel unleashed a satire comedy hit piece that, fifty years ago, would have almost certainly seen Kimmel making fun of black people. Twenty years ago, he would have been making fun of gay people. But today, in 2015, Jimmy Kimmel directs his ignorance, bigotry and demeaning hate speech toward vaccine-damaged children who are now labeled "anti-vaxxers."

No, you dumbass. It's the parents who are anti-vaxxers. Do you even know the definition of the word you claim is a slur? The children have no say in what their idiot parents do to them, which is why vaccination is such an important public health issue. Kids can't make the right decision for themselves, in part because they're still in that "needles are icky" phase, which you are generally expected to grow out of once your testicles descend.

Also too, what exactly would you like to be called if "anti-vaxxer" is so derogatory? What about "disease enthusiast"? "Measles maniac"? How does "penisy little pisspot" strike you? We're not picky.

Adams claims that there is irrefutable proof that vaccines harm kids, and he cites a CDC "whistleblower" who has been pretty thoroughly debunked by better debunkers. He also shows a bunch of pictures of children supposedly injured by vaccines, though of course he posts them with no context or links to their stories, which is good because one of the most prominent ones he cites, when placed in The Google, takes us to the website for the National Eczema Association, a group that is very pro-vaccine.

Mike also refers to vaccines as "medical violence" (great band name), and claims the campaign to protect kids against infectious diseases is exactly like that used against Martin Luther King, because Mike wanted to hit that last point on the wingnut trifecta (solidarity with MLK):

Historically, it was the public tolerance of hate speech against African-Americans and gays that encouraged some people to engage in violent acts against them. After all, a group of people who are verbally belittled with derogatory and bigoted hate speech by public figures is an easy target for those with violent tendencies.

The FBI, in particular, ran a seemingly endless campaign of threats, intimidation and violence against black America, even issuing a letter to Martin Luther King that called for the civil rights leader to commit suicide.

"There is but one way out for you," the FBI wrote MLK in a widely-publicized letter. "You better take it before your filthy, abnormal, fraudulent self is bared to the nation."

Mike's skill at turning himself into a victim when he is the primary aggressor is pretty masterful. Parents who don't vaccinate their kids are guilty of harming other people's kids as well as their own. They turn their darling children into potential disease vectors which can infect other children around them including kids who can't get vaccinated because they have freaking cancer. You're making a choice to do that to your kids and endanger others. Pretending you're the victim is like the FBI pretending MLK was oppressing their right to beat him up and throw him in jail.

Mike wraps up his screed with a call to get Jimmy Kimmel fired from ABC, which we're sure has Kimmel quaking in his funnyman boots.