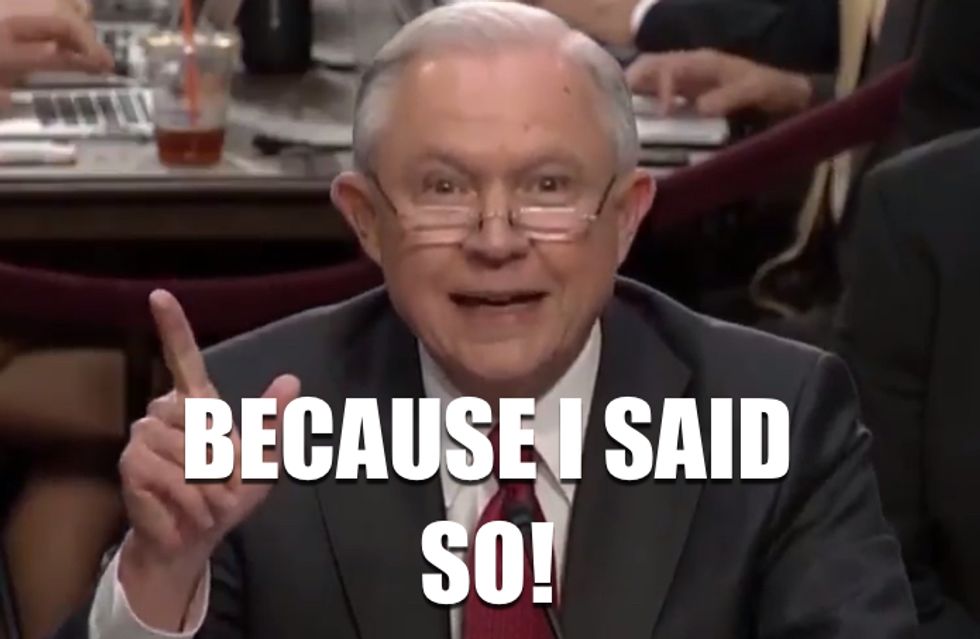 The best thing about Jeff Sessions's Senate testimony yesterday was your Wonkette's Live Blog, OF COURSE! Kamala Harris and Martin Heinrich tied for runner ups in the awesome badass division.

The worst thing was watching that chicken-fried leprechaun make shit up safe in the knowledge that he'll get away with it as long as the Republicans hold the House and Senate. IS IT 2018 YET?????

Over and over, Jeff Sessions refused to answer questions. Was he invoking executive privilege? NO, HE WAS NOT.

WARNER: Just so I can understand, is the basis of that 'unwilling to answer' based on executive privilege?

SESSIONS: It's a long standing policy [at] the Department of Justice not to comment on conversations that the attorney general had with the president of the united States for confidential reasons that rounded in the coequal branch.

WARNER: Just so I understand, does that mean you claim executive privilege?

SESSIONS: I'm not claiming executive privilege because that's the president's power and I have no power there.

Sessions was inventing a brand new theory that government officials can withhold information just in case the president decides to invoke executive privilege later on.

When pressed, Sessions argued that he wasn't "stonewalling!" Perish the thought! He just had to keep quiet because...REASONS!! And "long-standing policy of the Department of Justice." Of course he'd be happy to provide written copies of that policy...later. Probably much later.

And no, Mike Huckabee! Donald Trump does not have attorney-client privilege for his communications with Jeff Sessions. Because...oh, FFS!

We simply refuse to believe you Wonkers are as pig ignorant as a common Huckabee, so we will not be splaining the difference between Don McGahn and Jeff Sessions right now.

So what kind of "appropriateness policy" is that Alabama elf going on about?

So why do the words "executive privilege" give the attorney general such a fit of the vapors? Did Jeff Sessions's grandkids tell him that Invoking Executive Privilege is some kind of filthy sex act that you should definitely not be Googling?

Executive Privilege shields presidential deliberations from publication on the theory that the president is entitled to get candid advice without worrying that everything will be FOIA'ed. The White House's decision-making process on firing James Comey probably IS covered by Executive Privilege. Or it would be if the president hadn't spent the last six weeks constantly tweeting about it, pushing the Rosenstein memo, then admitting to Lester Holt that he'd fired Comey because of the Russia investigation.

If Jeff Sessions went ahead and invoked executive privilege, Democrats would argue that Trump can't assert his right to confidentiality because he's been mouthing off for a month. They might also point out that there's no privilege for illegal acts, such as obstruction of justice. Democrats are SO MEAN!

As Steve Vladeck put it on NPR shortly after the hearing, Sessions is relying on Senate Republicans to let him off the hook.

Once there's a formal claim of executive privilege, that sets in motion a series of legal maneuvers that could be deployed to litigate the claim of privilege and determine if it's a valid claim of privilege. By not quite invoking it, I think the Attorney General is creating an additional step where first the Senate Intelligence Committee would have to push back and decide that they wanted to compel him to answer.

Republicans shredding the law for partisan advantage? Probably a safe bet. But the Craven Sumbitch Award goes to Senator James Lankford of Oklahoma, who defended Sessions because Eric Holder refused to hand over documents in the Fast-n-Furious Senate inquiry. Checkmate!

It seems to be a short memory about some of the statements Eric Holder would and would not make to any committee in the House or the Senate and would or would not turn over documents even requested. That had to go all the way through the court systems for the courts to say no, the president can't hold back documents and the attorney general can't do that. So somehow the accusation that you're not saying every conversation about everything, there's a long history of attorney generals standing beside the president saying there are some conversations that are confidential, and then it can be determined from there.

This exchange at the end of Ari Shapiro's NPR interview with University of Texas national security law professor Steve Vladeck about sums it up.

We're waiting for the Republicans to care about the rule of law? THAT'S FUCKING GREAT!