Can Marco Rubio Count To Potatoe? 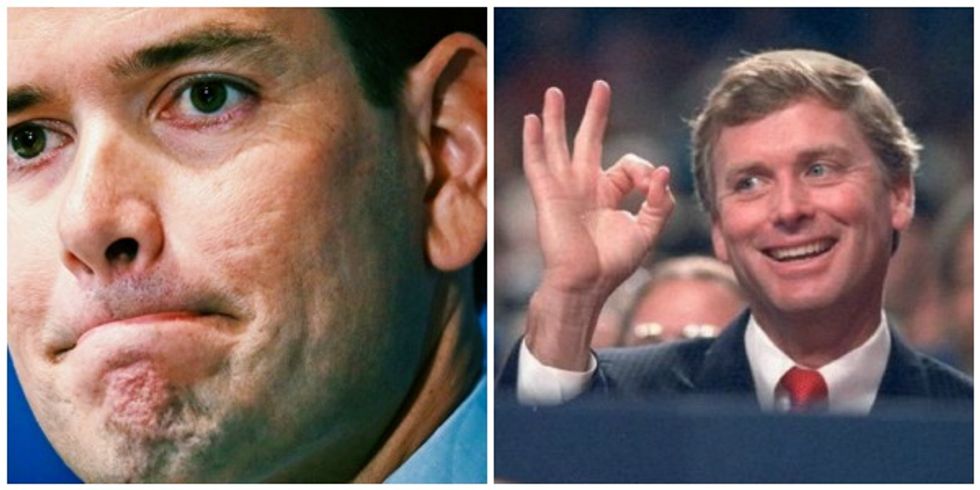 you can do it, marco!

This election cycle has been so filled to the brim with nativism, racism, lots of other bad -isms, and general incoherence that we've found ourselves remembering fondly the Republican politicians of yesteryear. Hell, even Saint Ronnie looks like a moderate next to these people, even though they are all pretty sure they are best suited to drape the long-mouldering corpse of Reagan across their shoulders when they get inaugurated, as is the American GOP tradition. And George H.W. Bush looks positively harmless compared to today's GOP, having only dragged us into one pointless war.

But you know who no one was thinking about, with fondness or otherwise? One of the best living examples of failing upward for no good reason: Dan Quayle. Today, that all changed, as not one, but two GOP candidates paid homage to Dan's most famous moment.

You'd think a gaffe that spectacular, a gaffe that has resonated for over 25 years, might make politicians a little bit cautious about their misspellings, but you would be wrong. Let's have Donald Trump kick things off for us with his trademark braggadocio, shall we?

After Twitter mocked this for a couple hours, The Donald, regrettably, deleted it and put up a tweet with the correct spelling. We are pretty sad he didn't just go on a Twitter rampage and say that everyone who spelled "honor" correctly was a loser and a hater.

Marco Rubio decided he would try to capitalize on the spelling errors of the Donald, but managed to step on his own dick instead.

Marco making fun of Trump for spelling choker "C-H-O-K-E-R" got some bad news there bud pic.twitter.com/Bz7eGA4N34