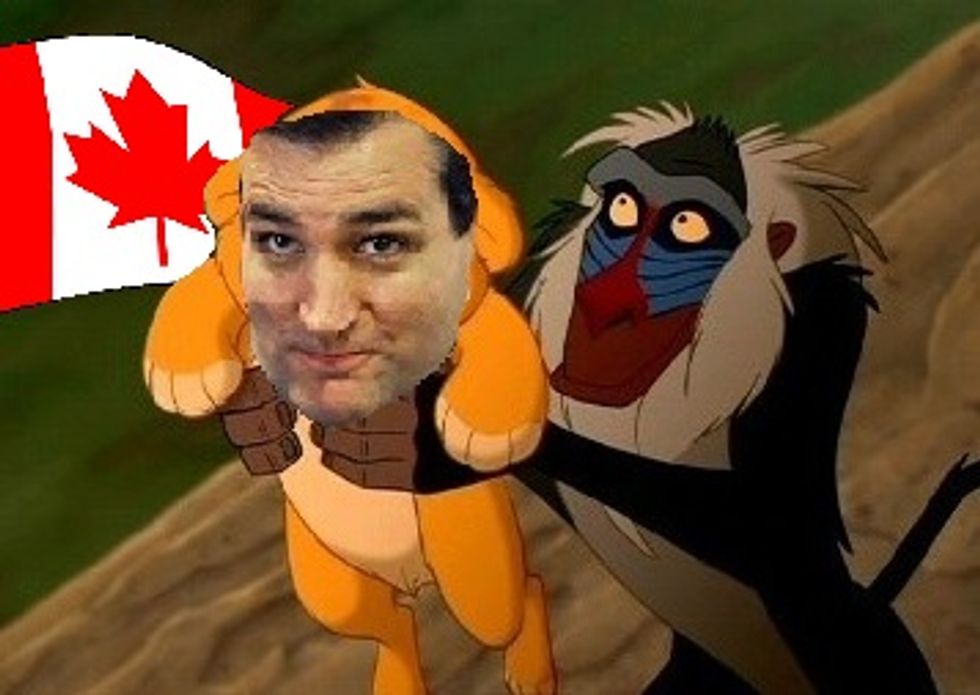 Birth certificates were all the rage a couple years ago. But now they are so passé, except for a few wingnutters out there. However, GOP Canadian-born Anchor Babby extraordinaire Ted Cruz (R-Calgary) is trying to put a new twist on an old favorite. Per The Hill:

Sen. Ted Cruz (R-Tex.) released his birth certificate to the Dallas Morning News on Sunday, a move that will undercut critics who say he’s ineligible to run for president.

As our rude upstairs neighbor, Canada regularly shits its worst turds upon the United States (Celine Dion, Avril Lavigne, The Biebs), but this is an unfortunate new low. However, Cruz is having none of this ‘born in Canada, therefore a Canadian citizen’ stuff.

Apparently, just like the U.S. of A (#1 bitchez!!1!), anyone born in Canada is automatically a Canadian citizen and is eligible for 40 melting glaciers and a moose. This creates Prezzy ambition issues for Cruz:

However, The Dallas Morning News reports that under Canadian law, Cruz’s birthplace of Calgary also made him an instant citizen of Canada.

Cruz spokeswoman Catherine Frazier disputed the notion that Cruz was also a citizen of Canada.

Apparently, you can ignore Canadian law as long as your spokesperson ‘disputes a notion.’ Good to know.

Frazier goes on to note:

We here at Wonket would still like to see Cruz renounce his Canadian citizenship. Otherwise, it will be difficult for him to run on the Renounced Foreign Citizenship ticket with Shely Bachmann (R-Switzerland).

None of this even matters, since Cruz does not have three dragons born of fire, making it very unlikely that he will ever cross the narrow sea and sit upon the Iron Throne.