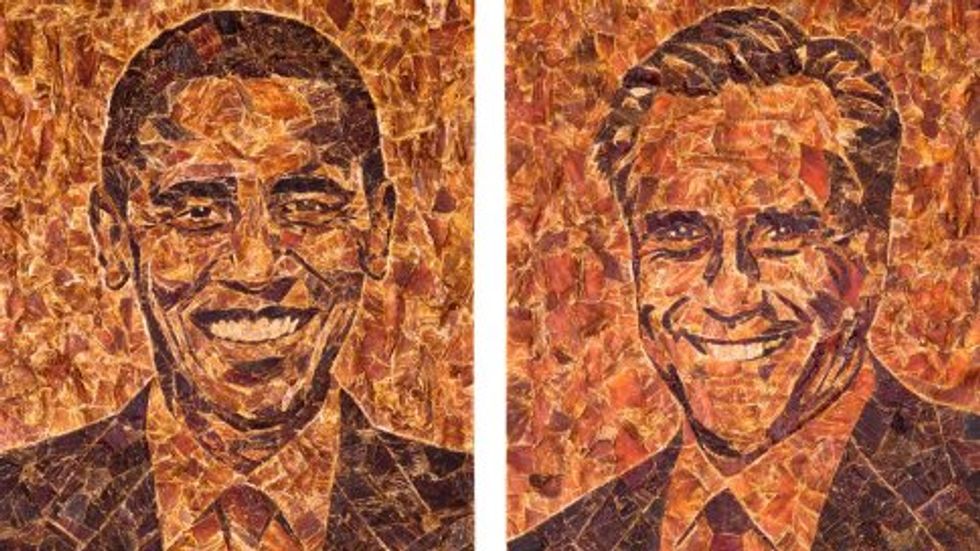 Here are Barack Obama and Mitt Romney made of beef jerky.

Well well well, look who is a wit, Adweek!

Jack Link's and ad agency Carmichael Lynch commissioned mosaic artist Jason Mecier to serve up portraits of both men created from 50 bags of beef jerky each. Now, why didn't Fox News think of that? This was a big-tent effort, with Jack's entire line—Sweet & Hot, Original Smokehouse, Turkey Jerky—getting in on the act. The president of the United States is referred to as Barack Obameat, while his Republican challenger is Meat Romney. (Jack Link's lucked out, because Beef Gingrich just doesn't have the same ring to it. Jerk Santorum, however, sounds just about right.)

Haha, Jerk Santorum. Anyway, think of some jokes please, because right now your Editrix has got none as she is still freaking out about how she will get to Tampa to be murdered by the weather, since planes will probably not fly into a hurricane, and her mother thinks she should rent a car and drive down there from Charlotte, because apparently her mother does not love her.

Barack Obameat. You can do better.