Caption Contest: What Is TBN Loon Paul Crouch Up To In Jerusalem? 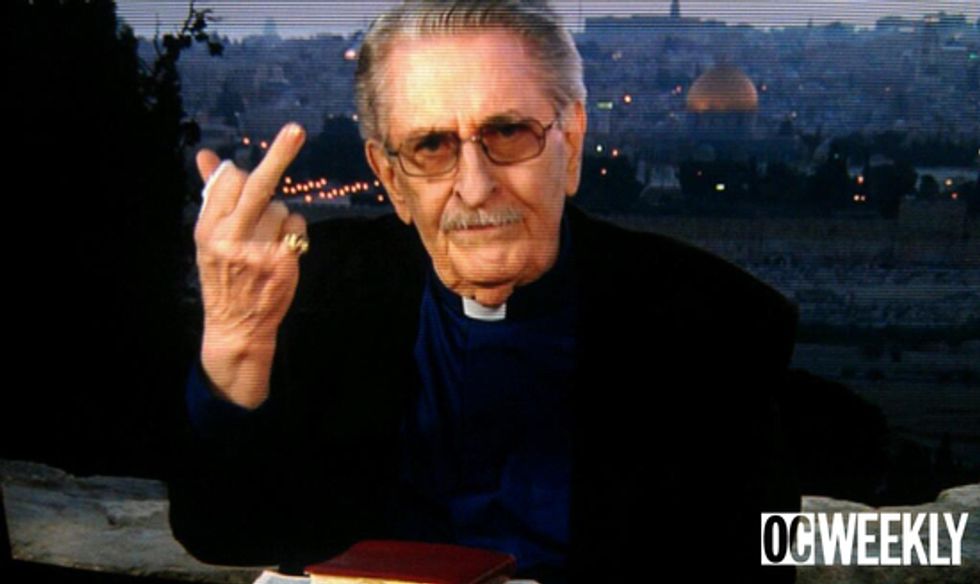 So here is what is purportedly an undoctored photo of televangelist Paul "No, My Wife Jan is a Different Person From Tammy Faye Bakker" Crouch of Trinity Broadcast Network, giving the finger for some reason to his camera crew while he is on camera in Jerusalem. Or at least, that is what reliable reporterGustavo Arellano of the OC Weekly says we are looking at here. Why is this news? It isn't really, but there is never a reason NOT to run a hilarious photo of a Man O' God flipping the bird, is there?

It is also an excuse to remind people of the many times the Crouches have been sued, such as for using donors' contributions to buy a $100,000 motor home for their dogs, or the time Crouch paid a gentleman friend $450,000 to just shut up about the gay sex already.

Your Correspondent also has his own fond memory of one of Rev. Crouch's TV performances, when during a visit to Israel somewhere around, we dunno, 1990 or so, Crouch saw an IDF armored personnel carrier trundling down the road and practically creamed his pants at the possibility that a bunch of Israeli draftees driving around on a routine patrol might -- just might -- represent the arrival of the Battle of Armageddon. This Paul Crouch is a pretty excitable fellow, is what we're saying, so there is just no telling what might have prompted him to give the camera a single-digit salute.

We know nothing about pixels, so we cannot say whether this looks 'shopped. But we will turn it over to the Wonkettariat: Write your funny comedy captions in the comments, STAT!

"Winner" gets an "OBAMAPHONE."