Carly Fiorina Begs America To Beg Her To Run For President 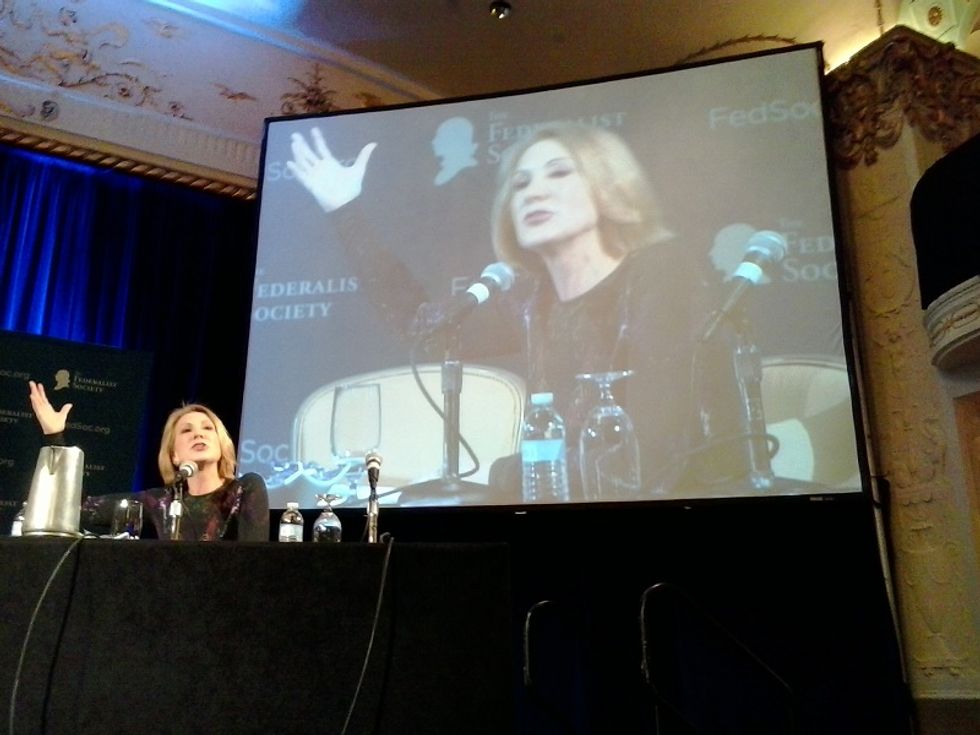 Lady Republican Carly Fiorina -- whose name is pretty much synonymous with "EPIC FAIL" and "Demon Sheep" and "LOL!!!" -- is pretty sure there is a groundswell of grassroots support for her to run for president. At least if she can convince the grassroots to start swelling.

A tip of the hat and clap clap clap to the Washington Postfor this HI-larious lede:

Former Hewlett-Packard CEO Carly Fiorina is busy ginning up the idea that there is a nascent "Run Carly Run" movement that just might convince her to run for president in 2016.

Now, we have certainly never driven a major corporation practically to the point of collapse, nor have we ever nationally disgraced ourselves with one of the Weirdest Campaign Ads EVER!, but we think maybe, just maybe, that's not how it works?

Take, for example, the movement to draft Sen. Elizabeth Warren to run for president in 2016. (Buy your E-Dub mugs now, comrades, while supplies last!) Pretty much every progressive in America dreams of a Warren presidency, and even though she has repeatedly said, "No, I am not running for president," that hasn't stopped activists from signing petitions and creating websites and begging and pleading and crossing their fingers and wishing on shooting stars and saying, "But come on, PLEASE be our president? Pretty please?"

We are unaware of any such activity on Fiorina's behalf -- by someone who isn't Fiorina, that is. Earlier this year, she even created her own little group to encourage Republican "women" (whose names are Carly Fiorina) to get their pretty little heads involved in some election stuff in between shoe shopping:

Professional failure Carly Fiorina recently launched Get Them Womens 2.0 Squared, which she is calling the Unlocking Potential (UP) Project. UP is totally different from all the other attempts to Get Them Womens we’ve seen in the last two years, because it is “modern.” Modern like it will promote a message that is not from the 14th century? Don’t be silly. It is “modern” because Fiorina is “using technology to train our messengers and broaden our messages.” Ah ha! Technology. That is modern. What kind of modern technology, you ask with bemusement because you weren’t born yesterday and you know that “modern” and “technology” are not typical Republican values? Why, a fortune cookie, and no I am not kidding you.

No, she did not get a fortune cookie that says "Yes, Carly, run for president because America totes is that into you." But close enough!

“‘Strong and bitter words indicate a weak cause,’” Fiorina read. “And that’s exactly right. The War on Women is shameless, baseless propaganda. There’s no fact to it. But it’s worked because it’s scared women to death. Enough.”

So far, Fiorina is the only "serious" (yes, we are taking a lot of poetic license there) lady Republican to throw her own hat into the maybe ring for the 2016 election. So she's no doubt hoping she will rally America's feminists to her side -- and what better way to do that than to tell them how stupid they are for falling for that bogus Democratic "propaganda" about how the Republican Party is maybe not so the best when it comes to the ladies?

But seriously -- no, for real seriously -- folks, as WaPo notes, no matter how much Fiorina insists there are at least a billion Americans out there breathlessly awaiting her campaign, no, not so much actually:

Serious contenders never really have to make this claim, because their appeal and standing is self-evident. So far, there is little evidence of that with Fiorina. The "people" who keep asking are more like Todd than the average GOP primary voter. (One GOP strategist e-mailed, saying, "Carly has a fan club of one." Ouch.)

Best of luck to you, Ms. Fiorina, in your exciting new venture to convince America to convince you to run for president. Don't play too hard to get.