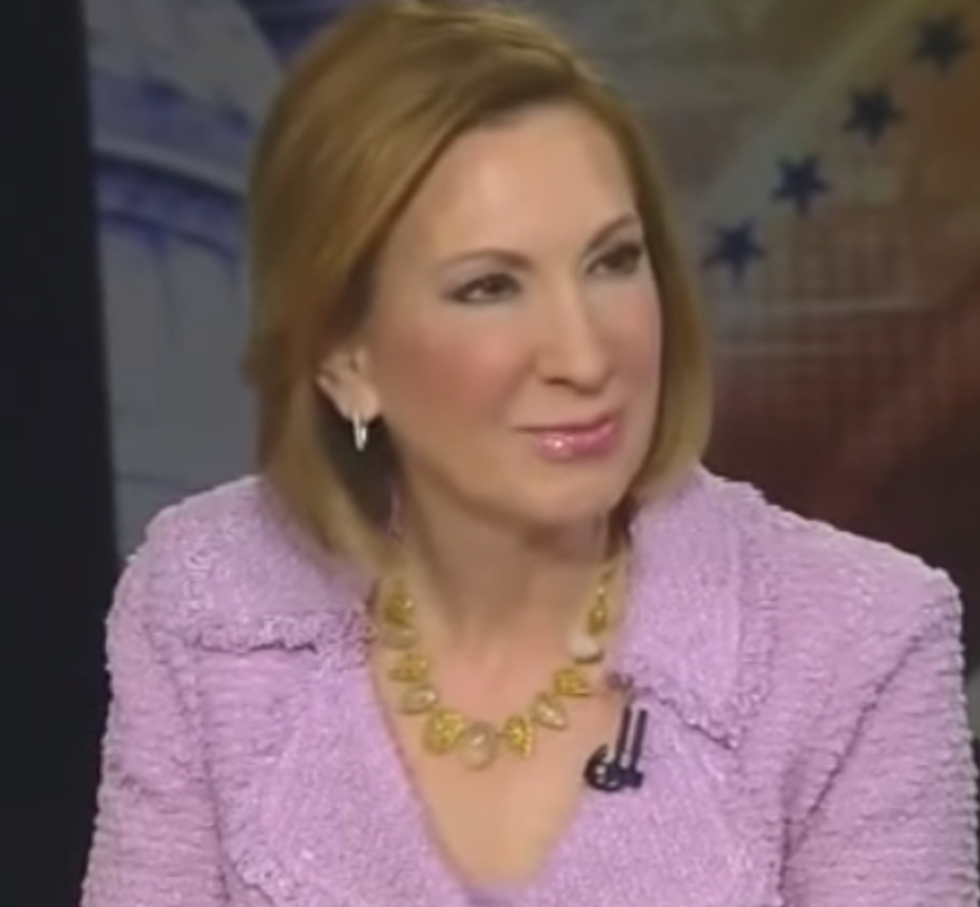 The stupid, it burns when you pee

Fresh off her glorious triumph over her fellow second-tier Republican presidential candidates (ooh, she did words more better than Rick Perry, impressive!), our nation at long last is ready to tune in to the wit and wisdom of Carly Fiorina. And what, pray tell, does that sound like?

"We must protect religious liberty and someone's ability to practice their religion," said Fiorina, receiving a round of applause. "We must devote energy and resources to doing so. Period."

Sweet baby-splitting Solomon, who tried to force their lady-tongue in Carly's honey pot? Or gag her with abortion pills? Oh, no one? Then what is she sputtering about?

"When you have highly communicable diseases where we have a vaccine that's proven, like measles or mumps, then I think a parent can make that choice -- but then I think a school district is well within their rights to say: 'I'm sorry, your child cannot then attend public school.' So a parent has to make that trade-off."

That? Seriously? Standing up for parents' rights to let their grubby little kids infect the whole state is still a thing? Not really, not since California passed a law in June cracking down on the gross patchouli hippies who "believe" vaccines will make their kids dumb. (Cough genetics cough cough.) If you would rather chance it and find out if polio is really all that bad, you are welcome to do that, so long as you and the rest of your family stay inside your own little homeschooling bubble, with the Easter Bunny and the Tooth Fairy, and whatever other mythical stuff no one ever explained to you isn't real.

So really, California's new law is exactly what Fiorina is advocating, but that's no reason for her to not make with the stupid, like so:

Fiorina, the former CEO of Hewlett-Packard who has never held elected office, recounted a discussion she had with her daughter, who was hesitant to have her own daughter vaccinated against the sexually transmitted disease HPV.

"And she got bullied. She got bullied by a school nurse saying: 'Do you know what your daughter is doing?'" Fiorina said. She said her daughter's response was this: "Yes. I do, actually."

So Fiorina's daughter is a spineless wimp who got "bullied" by the other mommies to inoculate her daughter against vag cancer. Oh the horror! Maybe someone needs to pass a law that says mommies can't bully other mommies, because that's mean and unfair. So how is this related to that? It isn't. But that's got nothing to do with Making A Point, For Liberty!

“I think when we’re talking about some of these more esoteric immunizations, then I think absolutely a parent should have a choice and a school district shouldn’t be able to say, ‘sorry, your kid can’t come to school’ for a disease that’s not communicable, that’s not contagious, and where there really isn’t any proof that they’re necessary at this point.”

Does Fiorina think HPV is one of those "esoteric" thingamajigs, because the Centers for Disease Prevention and Control say that it's "so common that nearly all sexually active men and women get it at some point in their lives." HPV is one of the lesser big-deal sexually transmitted diseases, especially for men, and also for women, so long as they get their regular doctor check-ups to make sure the virus doesn't turn into cancer and kill them. (You know where you can get those regular doctor check-ups, ladies? Planned Parenthood, which Fiorina also wants to get rid of, yay feminism!)

Does Fiorina really think The Government is cramming kids full of "esoteric" immunizations that they do not even need? Or maybe she just means the mommies shouldn't bully each other, which has nothing to do with The Government? Or maybe Carly Fiorina is just A Idiot. Yeah, let's go with that:

Fiorina, who ran for Senate in California in 2010, said she disagreed with the state’s decision recently to eliminate a parent’s right to not vaccinate their children, even in cases of religious objection.

“California is wrong on most everything, honestly,” she said. “I’m not at all surprised that they made that mistake as well.”

Little tip for ya, Carly. When running for office, it is considered unwise to shit all over your own state. Just ask President Romney.