Cartoon Violence Is Some Kind Of Cartoon Dominatrix-For-Hire Now, Apparently? 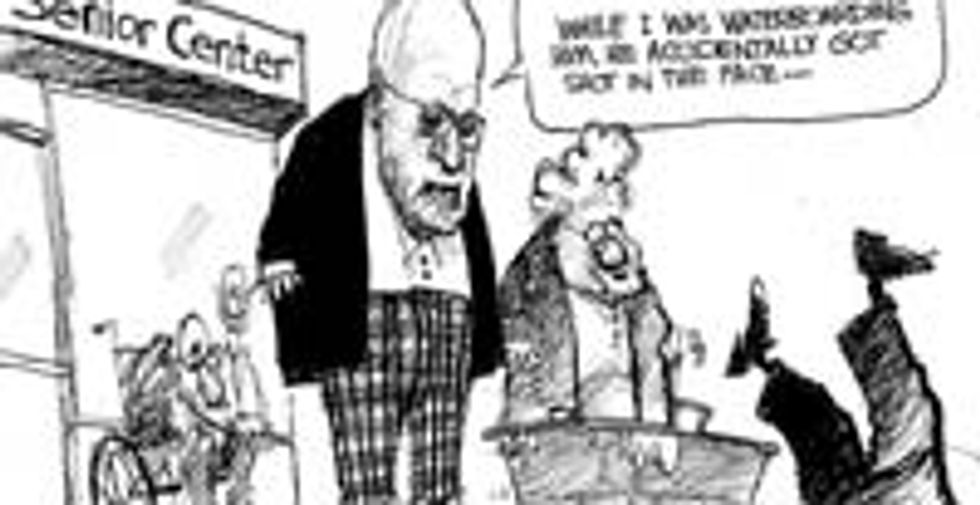 By the Comics Curmudgeon
Being a political cartoonist has got to be kind of rough. They're all getting fired as newspapers downsize, and those that still manage to have a job drawing cartoons, for money, inevitably make political points that alienate at least half of their readers. So you'd think that they might find it enraging that some asshole on the Internet has a whole weekly venue just to make fun of their work, despite the fact that said asshole has no artistic talent himself whatsoever? And yet sometimes these sad souls actually send us their own cartoons, in hope of us mocking them! After the jump, it's a very special Cartoon Violence, starring the vilest cartoon you can possibly imagine.

OK, so every once in a while, the Wonkette tips line gets an email from nationally syndicated cartoonist Jeff Danziger, which generally consists of just an attached image file with no accompanying text. I generally end up not using these, because I can't fit them into whatever half-assed theme I come up with for the week at the last minute, so with his latest submission Mr. Danziger has apparently decided to up the ante. Since he sent it to me, I suppose nobody can object if I reproduce it here full-size:

So, uh, yeah, that's pretty much a naked Dick Cheney, his flabby ass cheeks on full display, preparing to drop a semen-filled condom bearing the slightly befuddled face of George W. Bush into the toilet. (Question: Is the Bush-condom "ribbed" for "her pleasure"?) Now, Mr. Danziger might think that this sort of thing is "hip" and "cool," but I have to ask: What about the children? See, my wife is a professional sex educator, which means she goes to schools and talks to the youth of today about sex diseases and baby-making and whatnot, and she always emphasizes that you should never flush condoms down the toilet, because you'll block up the plumbing and then your parents will have to call the plumbers and they'll find the condoms and you'll have some 'splaining to do.

Anyway, I have not been able to find this cartoon anywhere on the Internet, not even on Danziger's own site. This makes sense, because obviously no reputable newspaper would print it. It is repugnant and offensive, and we at Wonkette are proud to present it here. And let's wrap up the last Cartoon Violence column of the Bush-Cheney era with a few parting shots at the second half of that dynamic duo!

(Remember, as always, clicking the comic makes it bigger.)

Dick Cheney is an angry, somewhat confused old man who tries to shoot and torture everyone around him. "Yeah, we know that," you say, "But what about the cartoon?" Oh, ha ha, you're very droll. See, the cartoon posits that he will continue to do this after he retires, in an old folk's home! It's funny when it happens to comical old people, you see.

Dick Cheney is a glowering hunchback who uses ancient, crumbling, ink-stained parchment when he needs to wipe poop off of his butthole. He also wears his suit jacket while taking a dump. Who does that? For some reason that gives me the creeps more than anything else in this cartoon.

Dick Cheney is blatantly infringing on the Grinch™, a licensed piece of intellectual property wholly owned by Dr. Seuss Enterprises LP. Unfortunately, if anyone complains, he'll have them tortured and killed.

SPECIAL INAUGURATION DAY MESSAGE FROM YOUR COMICS CURMUDGEON! Because Ken and Sara live in balmier climes far from the cesspool of our nation's capital, and Jim will be cowering in his DC apartment with his XBox and his malt liquor like a pathetic coward, I will be the only member of Team Wonkette actually out on the streets of Washington for the inauguration of Our Barry! I will attempt to "report" on the scene on the ground, which reporting will mostly consist of photos and short, badly misspelled notes sent from my elitist iPhone, assuming that cell phones even work down there Tuesday, and some thing I'll write that evening when I return to Baltimore, assuming I am not trampled to death. I will also attempt to interview people, assuming I can figure out how to do voice-recording thingies with my phone. So, Wonkette readers, keep an eye out for me! I will be the guy wearing a blue coat, and probably a hat.