CDC Director 'Too Busy' With Ebola Nonsense To Explain Himself To Bill O'Reilly, As If 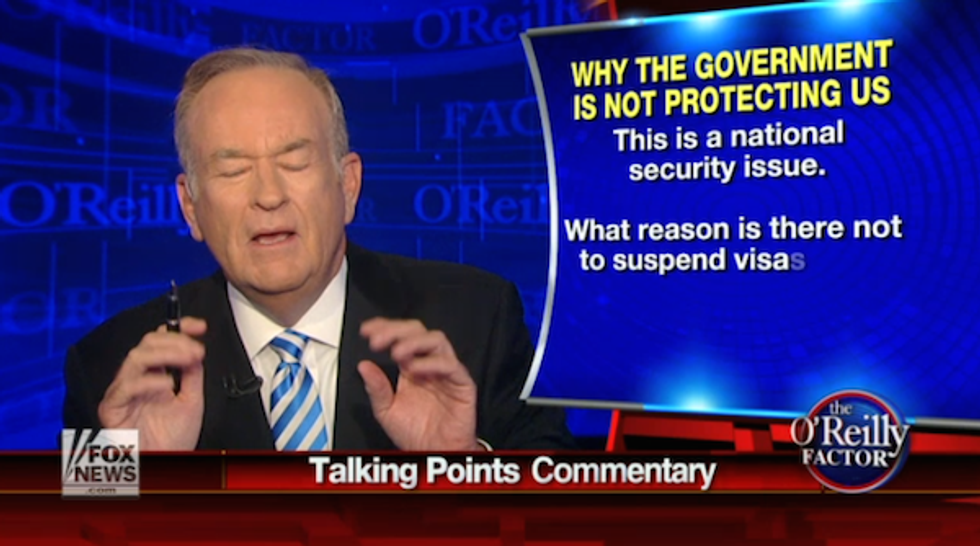 Everyone knows that President Obama is trying to kill us all with Ebola, and he's puppet-mastering Dr. Tom Frieden, director of the Centers for Disease Control, to make us think that is not the plan, even though it totally is. That's just a fact.

Fortunately, Bill O'Reilly is here to speak derp to power and make sure we all know The Truth. On his Monday night show, he laid out the super compelling evidence.

We have asked Dr. Frieden a number of times to appear on ‘The Factor’. He will not because he is afraid. He knows that I know he's not being candid, that he is spinning the situation and not being forthcoming about how the disease is being spread. Frieden should resign.

That alone should convince you. If Dr. Frieden had nothing to hide, he would go on Fox News to answer Bill's fair-and-balanced questions. It's not like he has anything better to do in his role as head of the agency that's trying to address the spread of Ebola. And O'Reilly knows that Dr. Frieden knows the real way to protect Americans is to keep all those scary disease-ridden Africans as far away as possible. He must know that, even though he is lying and saying that a travel ban would not actually do any good. But that is a bald-faced "propagandist" lie because O'Reilly -- who doesn't understand how the tide works or who put the moon up there in that there sky -- is something of an expert on Ebola, like every other bobblehead on Fox.

When Frieden recently appeared on Fox, even though he's too much of a coward to do that, his evil plot to lie to America was exposed by science expert Steve Doocy:

“I know you say the public does not need to worry about it,” Doocy said. “But I’ve got to tell you something, my daughter works in the building directly across the street from the hospital, and I talked to her last night. She’s a little freaked out.”

But Frieden refused to admit that Doocy's daughter's scientific expertise was far superior to his own, which proves that he is lying. And, as Doocy reported so we can decide, the reason for his lies is obvious:

One other theme we got on the email, doctor, was this — and this is a political thing, but you’re part of the administration. They feel that the administration has misled a lot of people on a lot of things. Why should we believe you when you’re telling us this stuff?

It would be irresponsible not to assume that Frieden, as part of the Obama administration, is up to some seriously nefarious no good. Sure, he might be some kind of scientist doctor type person who might have some vague concerns about disease control and prevention, like his business card says, but that is far outweighed by his true mission: telling Americans that Ebola is no big, don't worry, nothing to see here. So that Obama can once and for all destroy America by letting Africans sneak across our borders through major airports to infect us all.

As O'Reilly scientifically and objectively points out, "There is no compelling reason for West Africans to come to the United States at this point in time." And since a new NBC poll shows that 58 percent of Americans believe there should be a ban on travel from West African countries, that proves the necessity of a travel ban because those 58 percent of Americans clearly have a better grasp of how to handle a viral disease than some Obama propagandist who probably doesn't even watch Fox News. Hmmph. Maybe if Dr. Frieden actually cared about our national security, he'd listen to those Americans instead of consulting his scientific books or whatever.

This is a national security issue, is it not? What reason is there on the earth not to suspend visas from that area? The truth is there is no reason -- just a bunch of excuse making.

We are on to you, Dr. Frieden. And unless you admit that you are lying all the lies in order to cover up Obama's evil scheme -- or go on Bill O'Reilly's show, not that he needs the ratings boost because he already defeated the media forever -- you have no choice but to resign. It is the right and proper thing to do, for national security and America and those 58 percent of Americans who obviously know a lot more than you do.