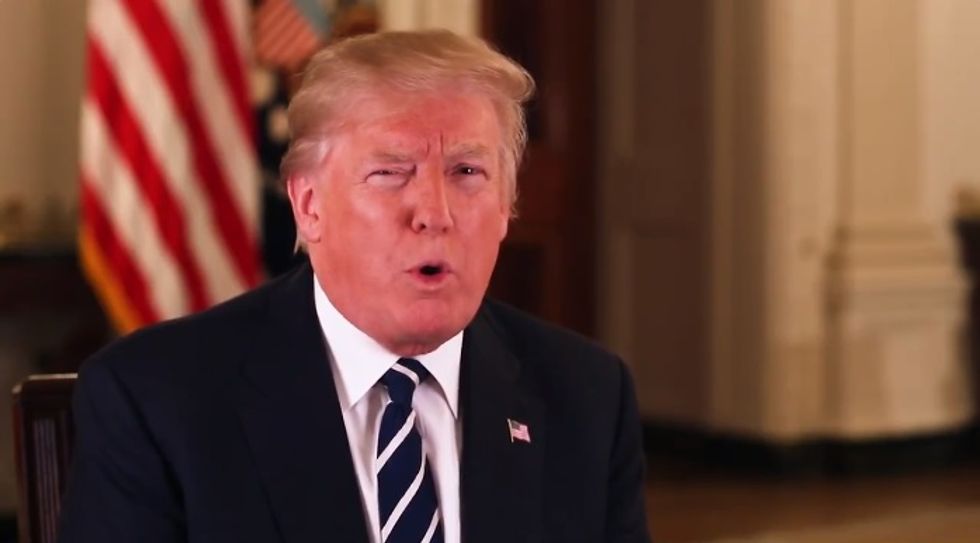 "Dr. King's dream is our dream. It is the American Dream. It's the promise stitched into the fabric of our Nation, etched into the hearts of our people, and written into the soul of humankind." pic.twitter.com/tyUZGTecDY

How is Donald Trump honoring Martin Luther King Day 2018? By doing exactly what he did Saturday and Sunday: Going golfing. In his Friday proclamation for MLK Day, Trump signed the thing put in front of him, which called on Americans to honor King "with acts of civic work and community service." And since Donald Trump will be nowhere near a microphone while he's golfing, we guess that may count as a public benefit, so good for him.

Even the anodyne video Trump read for Twitter gives little hint of what Martin Luther King was all about -- he had a dream, and he was for equality, and he wanted people to be judged not by the color of their skin, but by the content of their character, a sentiment we appreciate, since we can say with no doubt that Donald Trump's character is racist and rapey, so we're happy to evaluate him on those grounds. We all share MLK's dream, at least in the vaguest sense, as long as Republicans can find enough wiggle room to insist that King dreamed of a world with no affirmative action, no nasty divisive rhetoric about black lives mattering, with strict limits on who can vote, and above all, the freedom to yell at black single moms for raising their gigantic sons to be thugs.

While Trump toiled away at making sure all God's children have to duck whenever he hits a drive, King's nephew Isaac Newton Farris Jr. was at the White House undercutting Trump by talking like that other guy who used to live there:

“It’s not a day to hang out in the park or pull out the barbecue grill,” he said. “It’s a day to do something to help someone else, and that can be as simple as delivering someone’s trash or picking up the newspaper for that elderly person who can’t get to the end of the driveway.”

Or by nailing a 12-foot putt on a really tricky lie. We all serve, in our way.

“Nah, I’m not a racist,” he said. “I’m the least racist person you have ever interviewed, that I can tell you.”

Probably even less racist than Martin Luther King, in fact, since King was always talking about black people all the time, where Trump thinks people on both sides of racist violence can be excellent. Who's more open minded NOW, fake news media?

In addition, Donald Trump enlisted the help of two Republican senators who'd been at his Thursday meeting where he talked about Haiti, El Salvador, and African nations as being "shithole countries" to deny he'd used that word at all. Tom Cotton and David Perdue both insisted on Sunday shows that Trump hadn't said the word, and that Dick Durbin was just a big old untrustworthy liar, because he's a Democrat and all Democrats lie -- it's just part of their character, and did Martin Luther King ever dream of not judging people on their party affiliation HE DID NOT. Lindsey Graham was also there and confirmed Trump had said it, but let's not get all tangled up in details, shall we?

In any case, today we honor Martin Luther KIng Jr., who's doing a great job and getting more and more recognition for it, as long as you don't get too specific about his opinions on white supremacy, economics, poverty, war, what the meaning of "equality" is, or really, much of anything, Amen.

Yr Wonkette is supported by reader donations. Please click here to throw money at us!