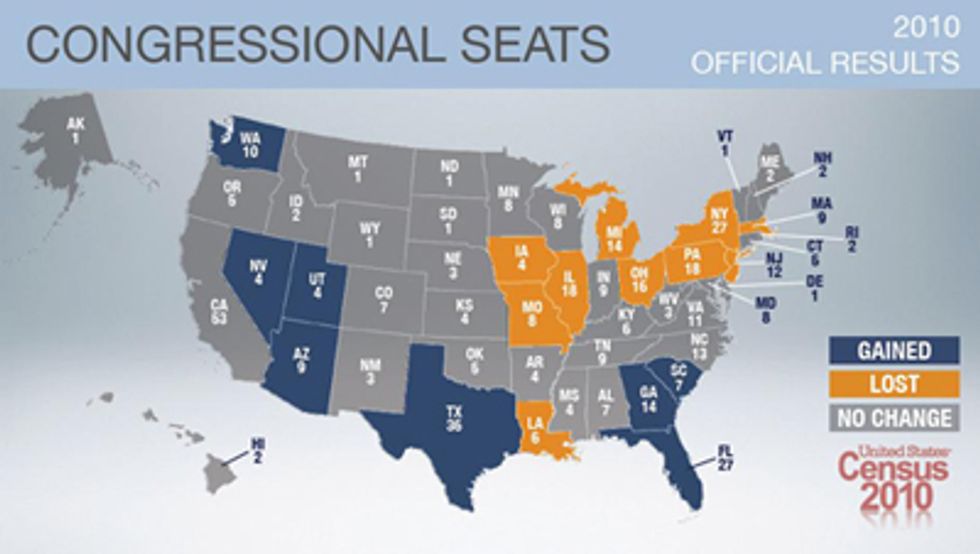 The 2010 Census results have come out, communistically, today, andaccording to The New York Times, "Bureau officials declared that the United States population had grown to 308,745,538 million over the last decade." 308,745,538 million? That is 308,745,538,000,000 people! Wow! States in the Midwest and Northeast are losing both seats in the House of Representatives and electoral votes, while states in the South and Southwest have made gains. Texas picked up four; Florida, two. So from now on, Florida will have an even greater ability to hold presidential elections hostage with its stupidity, and Congress will focus primarily on how to give sex offenders the death penalty while simultaneously increasing their Second Amendment rights.

And now redistricting will begin, and -- oh look, suddenly Republicans control everything!

On the surface, the Republicans would seem to have the advantage. Most of the states winning seats trend Republican, and most of those losing them tend to elect Democrats. What is more, Republicans will be in a strong position to steer the process, with Republican governors outnumbering Democrats 29 to 20, with one independent, come January. Republicans also gained control of at least 18 legislative chambers in the midterms last month.

This will be done fairly, with no gerrymandering whatsoever. And that means giving Ben Quayle two seats in the House. [NYT]