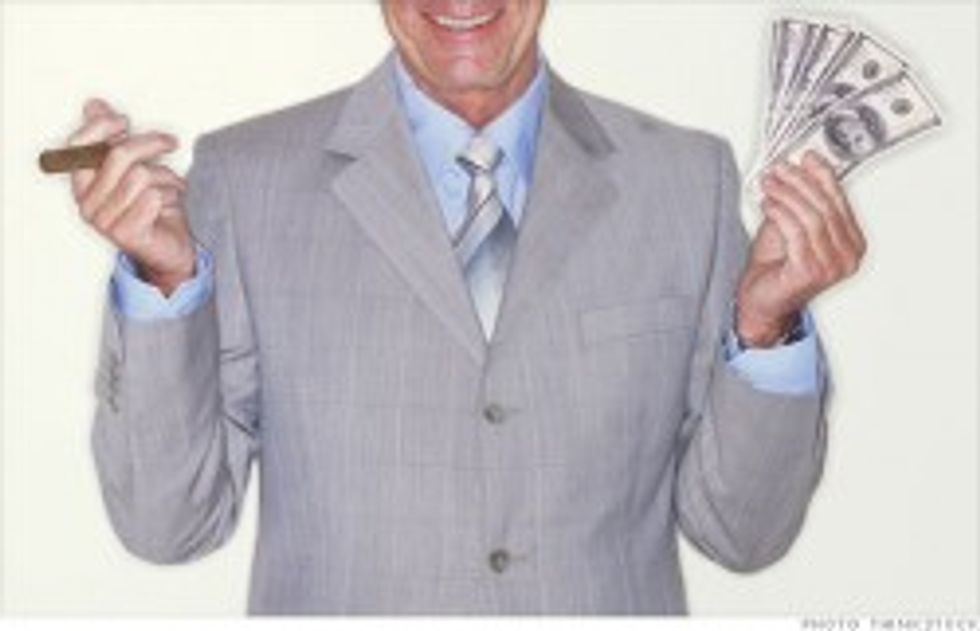 Citing a pressing need to siphon wealth from workers to Job Creators, corporations have embarked on a long con to convince us all that excessive CEO pay is absolutely necessary. After all, they must ensure that the Best and Brightest are at the helm! CEOs make so many important decisions, every day, all the time! They must therefore make these important decisions from the comfort of aprivate jet, or they will soon be making all of these important decisions on behalf of another company -- one that is willing to give them a private jet -- because CEOs are in such wild demand and the pool of replaceable workers is so small. Except now, a bunch of commie-liberal academics have demonstrated that inflated CEO pay is not necessary in order to retain top talent given that CEO skills are not all that transferable. Also, when a CEO moves from one firm to another, they usually screw the pooch.

New research by Charles M. Elson, director of the John L. Weinberg Center for Corporate Governance at the University of Delaware, and Craig K. Ferrere, one of its Edgar S. Woolard fellows … conclude[s], contrary to the prevailing line, that chief executives can’t readily transfer their skills from one company to another. In other words, the argument that C.E.O.’s will leave if they aren’t compensated well, perhaps even lavishly, is bogus. Using the peer-group benchmark only pushes pay up and up.

“It’s a false paradox,” Mr. Elson said in an interview last week. “The peer group is based on the theory of transferability of talent. But we found that C.E.O. skills are very firm-specific. C.E.O.’s don’t move very often, but when they do, they’re flops.”

We should note, of course, what it means to “flop” within the context of this report. A CEO “flops” when he fails to create long-term shareholder value. But anyway, we digress. The point here is that we can now outsource the job of CEO, probably. After all, if they “flop” when they come from an outside firm, why not just bring them from an outside Chinese or Indian firm? They’ll probably “flop” just as hard but for less pay. Just an idea, anyway. We’ll put a pin in it for now, come back to it later.