Charles Koch Wishes Courts Would Give All Billionaires An Even Break 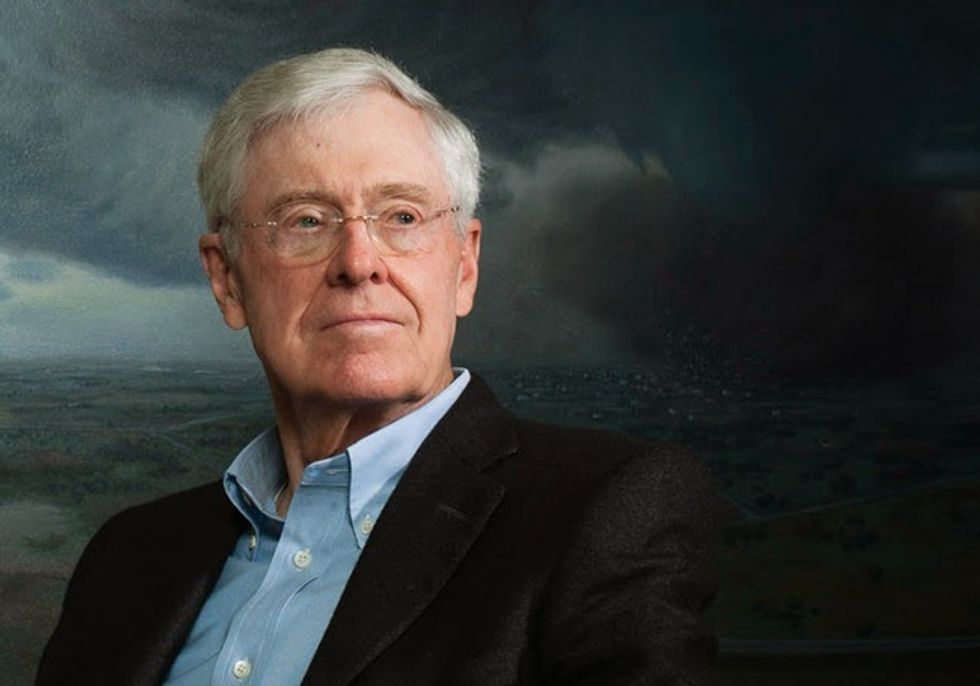 Squillionaire Charles Koch, having reshaped the legislative and regulatory landscape a bit more to his liking over the past few decades, is planning to do some exciting renovations to the judicial branch of government next. But don't worry! He's not out to get more lenient sentences for perpetrators of white-collar crime, because rich guys never go to prison anyway. No, Charles Koch and his top attorney say this new focus on judicial reform is all about making the justice system fairer for the little guy. Trust him.

Charles Koch's interest in reforming the criminal justice system began when his company was indicted on 97 felony counts -- including fraud and conspiracy -- for environmental violations at a Koch Industries refinery in Texas. A story in the Wichita Eagle details the bloated plutocrat's transformation into a warrior for all who've been treated unjustly by John Law:

Prosecutors dropped all but one of the charges six years later, after the company spent tens of millions of dollars defending itself.

“It was a really, really torturous experience,” said Mark Holden, Koch’s chief counsel. “We learned first-hand what happens when anyone gets into the criminal justice system.”

Holden said Charles Koch wondered afterward “how the little guy who doesn’t have Koch’s resources deals with prosecutions like that.”

So now Charles Koch, like Bruce Wayne, will become a champion for the downtrodden, the common man, the little guy, any everyday schlub who might find himself just accidentally dumping hundreds of tons of toxic chemicals into the air and water around their humble home.

Koch and Holden insist that the goal is to reform the criminal justice system for everyone, not just for the Kochs (though hey, if it helps the Kochs, that would be OK too, you know?). The federal case spurred Koch to study up, and he pondered a most weighty thought: Had the justice system "been over-criminalized with too many laws and too many prosecutions of nonviolent offenders, not only for him but for everybody"? He decided that all signs pointed to YES!, so he decided to use his vast resources for the cause of righteousness:

Ten years ago, he began giving money to support efforts by the National Association of Criminal Defense Lawyers to help train defense lawyers and reverse what some see as a national trend to get tough on crime, which has resulted in the tripling of the incarceration rate since the 1980s and has stripped the poor of their rights to a legal defense.

He’s going to give more to that effort, he said.

“Over the next year, we are going to be pushing the issues key to this, which need a lot of work in this country,” Koch said. “And that would be freedom of speech, cronyism and how that relates to opportunities for the disadvantaged.”

The nation’s criminal justice system needs reform, “especially for the disadvantaged,” Koch said, “making it fair and making (criminal) sentences more appropriate to the crime that has been committed.”

We'll admit, it almost sounds like maybe he wasn't rubbing his hands together and cackling as he said that. Koch's mouthpiece, Holden, sounds especially social-justicey in the newspaper piece, making properly concerned noises about the negative effects of legislative attempts to Git Tuff on crime, particularly in terms of racial disparities and long sentences for nonviolent offenses. For heaven's sake, Holden even says Koch is worried about jobs and voting rights for former felons.

Weird. Maybe he just wants them to be able to work for Koch Industries so he can tell them how to vote.

The Eagle piece notes that Koch's efforts against "overcriminalization" have led him to enter "unofficial alliances" with groups that would typically gladden Yr Wonkette's fuzzy liberal heart. In addition to the defense attorney group, he's also teamed up, on the down-low, with "political activist George Soros and the American Civil Liberties Union, who are also campaigning for a reduction in prison populations."

It's not really too surprising, we suppose -- it's of a piece with libertarian efforts like Rand Paul's drive to reduce prison sentences for drug crimes, which sounds all beautiful and Kumbaya-singy, until they add that of course, real liberty also means rescinding restrictive laws against dumping toxic sludge into rivers.

Or maybe Koch's genuinely interested in helping the little guy, for Great Justice. Given his history, though, we can't help but think he's mostly concerned about the little guy with 97 counts of environmental crimes.