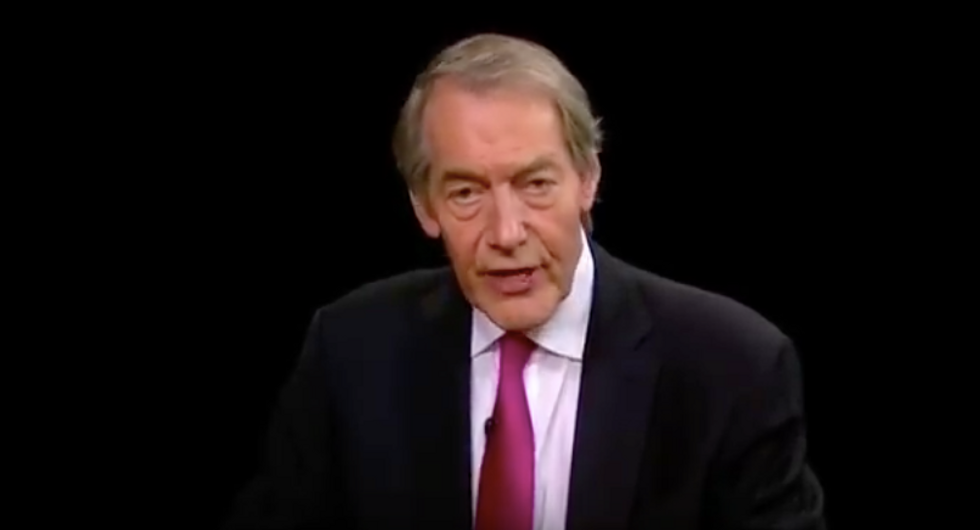 Charlie Rose knows what you, the people of America want -- and it is a series in which he, a man recently called out for sexually harassing women, interviews other men recently called out for sexually harassing and/or assaulting women, in hopes of providing the foundations for their comebacks. Which we are all so very, very hungry for.

And he had hoped that editor Tina Brown would want to do it with him. To which she promptly replied (we assume) "HAHAHAHAHAHAHAHA, fuck no."

Brown confirmed this to Page Six, after mentioning it briefly at an event:

Brown — who added that she passed on the project — first mentioned the proposed Rose redemption show while she appeared at a Q&A this week at the Brooklyn Bridge Park Conservancy’s Women’s Luncheon.

Said a source: “Tina said she’d just been emailed about co-hosting a new show with Charlie Rose, in which they’d interview Louis C.K., Matt Lauer” and others caught up in the #MeToo sexual harassment scandals.

Brown explained to the group that she was having none of it, and remarked, “These guys are already planning their comebacks!”

The sheer gall of asking Tina Brown, of all people, to assist in resurrecting the careers of these men is actually just startling. In what world would she have any reason at all to do this? And what is it that makes them think anyone wants them to come back in the first place?

Over the last month there have been media drips here and there dissecting which man caught up in a #MeToo scandal will be the first to "overcome" it, as if it is something that will inevitably come to pass. The Hollywood Reporter published an article last week titled "Louis CK's Comeback Likely Runs Through Comedy Clubs," in which various comedians speculated on how Louis CK could revive his career. Vanity Fair published an article titled Matt Lauer Is Planning His Comeback.

Since his firing in November, Lauer has reportedly been lying low in another Hamptons home, but a recent sighting in Manhattan suggests what we really should have seen coming: Matt Lauer is ready for his comeback.

Tucked away in a Page Six report about the warm welcome Michael Cohen received at an Upper East Side restaurant (a familiar experience for disgraced members of Trumpworld), there is this intriguing sentence: “Lauer is said to be testing the waters for a public comeback by coming out of hiding from his Hamptons home. With his marriage to Annette Roque now over, he’s ready to restart his life, pals say.” Lauer was at the same restaurant as Cohen, having lunch with Mitch Modell of Modell’s Sporting Goods.

I'm not sure that "leaving the house" means he's planning a comeback, but what do I know.

Real talk: There is definitely no redemption arc for Matt Lauer. Pretty much his only job was being the likable guy on The Today Show who some people maybe kinda wanted to bone because he looks a little like Humphrey Bogart (whom we all collectively agree was the sexxxiest man ever, shut up). Now that everyone knows about his RAPE BUTTON, no one thinks he's nice and no one wants to bone him. It's not like anyone was going around feeling any great loss for his work. Work that has, in the past, been done by a literal chimpanzee.

It's hardly as if he directed Chinatown. Not that Roman Polanski deserves a "redemption arc" either, but also no one is sitting around feeling particularly conflicted about really loving his work on The Today Show and being repulsed by his behavior as a human being. Louis CK, at least, brought something to the table (though it was often his penis), and I don't see too many people (outside of The Hollywood Reporter) hankering for his big comeback -- so why Matt Lauer would think he has a path to redemption is just beyond me.

The thing Charlie Rose and these other men likely don't understand is that their "comebacks" are entirely unnecessary. There are enough talented people out there who don't go around showing their genitals to people who don't want to see them that we don't have to all sit and hope that they can win our hearts back somehow.

All of this being said, the only people to whom a show in which an accused sexual harasser interviews other accused sexual harassers could possibly appeal to is probably Charlie Rose, those being interviewed themselves, and those who fear that they themselves will soon be outed for similar reasons and want to pave a path to career resurrection in advance. There's nothing in it for the rest of us.

Wonkette is independent, woman-owned, and relies entirely on contributions from YOU, our beloved readership. Click here to tip us!