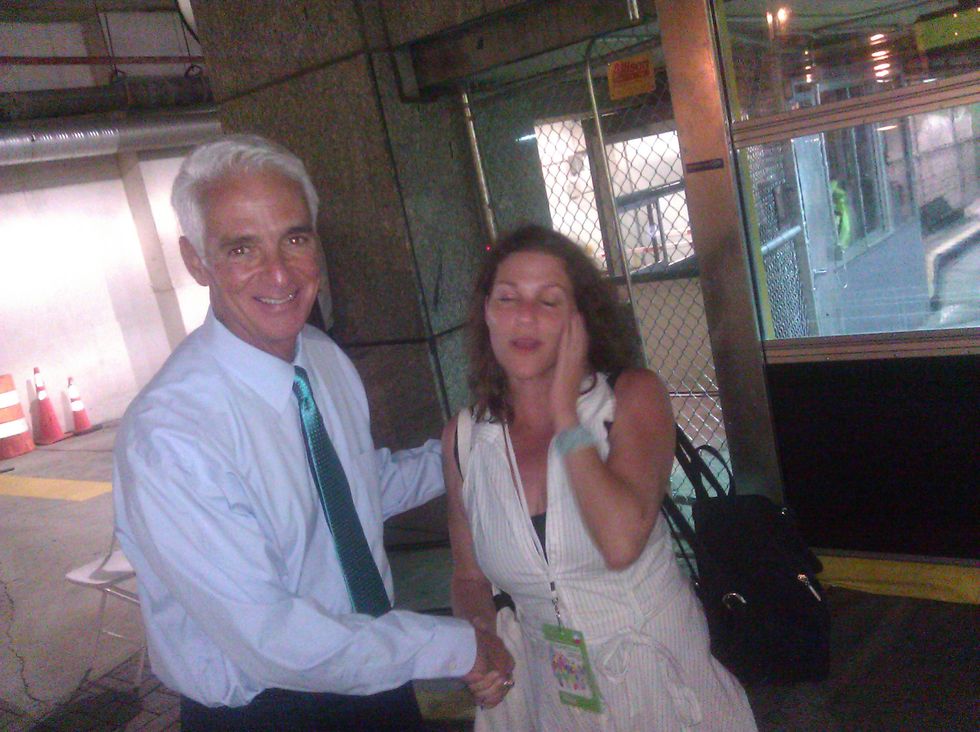 Sorry we did not blog at you yesterday; we left Jim here in charge at the house (la Casita de Wonkadonk) and went into the Charlotte wilds in search of our badges (WE NEED STINKING BADGES), and then we ate a bunch of acid with one of our dudes from Boston (we have dudes from Boston), and now Jim is probably going to quit because of how we left him all day yesterday and then ran out of battery and never checked in and were just on acid all night like a fucking hippie 17-year-old girl getting arrested protesting the Original Gulf War. 1990, represent! Also, you guys, make Jim not quit! More importantly, however, did we mention world-famous walking Slate Explainer Dave Weigel is a crazy bitch?

We don't want to brag, but we have met Dave Weigel in person several times since Tampa, and also too we are actually housemates at la casita! No, we're cool, we explained to people who wondered if we could really Wonkette it up when we are just little ole us from little ole Los Angeles instead of real punditer types from the Beltway, we are housemates with Dave Weigel! Every morning he stumbles in at a million o'clock, and then when the rest of us are just lying on our couches (see: now) too hungover to even log into the secret chat room, let alone do any work, he has been up and gone for FUCKING HOURS covering some Mass delegate breakfast or random bullshit, doing the work of 10 strong men!

And so we saw him again last night -- closing time, of course, we had watched Bill Clinton's A+++ of a American Politicks primer on the big screens outside the Chris Matthews MSNBC doohickey at some sort of fake shopping Experience (it was probably even called the Experience) because the fire marshall cut off the line at the arena two people ahead of us, and we explained to everybody that to apologize for the inconvenience, they would like to us to take the umbrella of our choice from the 30-yard pile of left umbrellas on the way out, but we were kidding, but then a guy told us really, no, take an umbrella, they would all end up in a dumpster, so we chose something cute and little and sort of Pucci-stripesy, so thanks someone! So did you see Ol' Bill's speech? FOR THE RECORD, we were not a fan ever since the Welfare Act, which is why we voted Nader in both '96 and 2000 (and yes, we are sorry), but hooboy CHAINS Y'ALL FUCKIN' GREAT SPEECH BUBBA AND BIG DOG AND WHATNOT YEEHAW, it was even better than it would have been if it was Bud Hammond from Political Animals, that's how good it was!

So we were at some sort of "bar" or "ale house," and we'd seen Charlie Crist already on the street and been all "HOLY SHIT!" and what do you think Charlie Crist said? He said "Holy S to you too!" we are not even kidding he said that. So gorgeous in person, so very gay.

So there we were keeping our jaw from falling off our face with a last call beer, when out walked WEIGEL! "Hey Weigel!" we said, "what do you think about giving me a ride home to the place where we both live?" And here was his answer, before disappearing into the night:

"I could do that. Theoretically."

And that was literally the nicest thing he has said to us in the two weeks since we met him.